If you were thinking that Microsoft could not make their server line less palatable, Windows Server 2012 Essentials will prove you wrong. It is very clear that Microsoft has no direction, and everything is going to be an Apple clone even if it is the wrong thing to do.

As a little background, Microsoft is bleeding server marketshare at a rate that is frankly stunning. Server makers tell SemiAccurate that less than five years ago, Microsoft had more than 70% marketshare based on server shipped, not licenses sold. Given the number of high level people telling us the same ballpark number, and what they make, we feel this is quite accurate. Today, those same folk are saying that 30% marketshare for Windows server is quite optimistic, and that trend is accelerating.

To combat this bloodshed in one of their most lucrative domains, not to mention one essential to their increasingly tenuous consumer lock-in, what do they do? Make their product absolutely unpalatable to the intended market. Why? To look like Apple. Of you thought the not-Metro-anymore UI was a bad idea on desktops, what do you think about it coming to the server market? No, we are not joking. Also keep in mind Apple doesn’t make servers anymore. 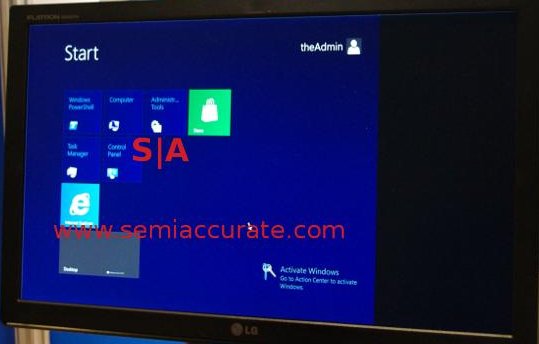 Servers are about management, efficiency, low overhead control, and remote management. Command lines rule, remote accessibility is mandatory, and anything that gets in the way is a bad idea. Microsoft is bleeding marketshare at alarming rates, so how do you stop it? Big colorful graphics that make remote management slow, tie it to Microsoft end user devices, and a UI that is painful to work with if you don’t have a touch screen. Right now, Windows Phone is 2% of the market and screens are unwelcome in server rooms. Touch screens do not exist in server rooms at all. What genius thought tying these two things in to a wounded product line would help?

To make matters even better, the UI and control schemes that people are familiar with are gone. In its place is a UI that is familiar to no one, makes users hunt for tools that used to be second nature, and requires a mouse, touch screen, and Windows Phone 8 to remotely manage. What percentage of tech gurus use Windows Phone 8 again? Please note, Windows Phone 7.x won’t cut it here, it has to be 8. And those 3rd party tools you used to use to manage things? Gone too.

To say that Microsoft is out of touch, clueless, and doesn’t know when to stop digging is getting old. Myopic management and Apple envy have destroyed their mobile chances and is about to do the same to desktop according to all the hardware OEMs at IDF. Now it is Server’s turn. The lack of understanding the very basics of the market had already reached terminal levels at Microsoft, but this move is quite frankly stunning in it’s stupidity. Cell phone UIs on servers? Wow.S|A