CES 2013: No, we are not joking, they designed an LED light bulb

The product you have all been waiting for has finally arrived, the new Rambus light bulb! No, we are not joking, Rambus is expanding their product portfolio from memory IP and design to LED light bulbs.

You may be forgiven for scratching your head right about now, but there is a natural progression to this. Rambus has been diversifying their portfolio lately, you might recall their security/crypto services or their tech to more evenly distribute the light from a laptop backlight lamp. It is that last one that actually does tie in to the light bulb rather nicely.

You might have seen a laptop with an unevenly lit display, dark corners and a bright center or the other way around. This is because an LED backlit display has lamps on the screen edges and spreads the light around with a optical plastic guide layer. Depending on the quality and engineering time spent, this can work well or at times really badly. Rambus has some tech to do it better than most, and that is what makes up the lamp shade below so spotty. The lampshade of many dots

We mean that literally, the picture above is the new Rambus light bulb inside a second light using their backlighting tech. The spots are actually a good thing, they distribute the light in a fairly even way, exactly what you want in a laptop. That is further spread by other optical layers in a laptop screen for a nice even light. If you have ever used the first few generations of LED lightbulbs, you might have noticed that most suffer from very direct and uneven light distribution. A 1970’s futurist would design this wearing bell bottoms

The initial Rambus LED lightbulb is a very highly engineered device with three major advances. The first is a convection design, it pulls cooler air in across the hot LEDs, and then guides them up the side with a chimney effect that also pulls in new cool air. It is designed to work at all angles, so no worries there either. Most of the white bits aren’t actually plastic but metal that works as a heat sink as well as a structural component.

From there, the silvery bits are the light guide layer coated with a microlens layer that turns the points in to a nice even spread. The actual LEDs are in the base and shine vertically, it is an edge lit light bulb, and it works quite well too. The author has been retrofitting his house for the last couple of years with LEDs, and this Rambus part is among the best out there, it is not a cheap hack. 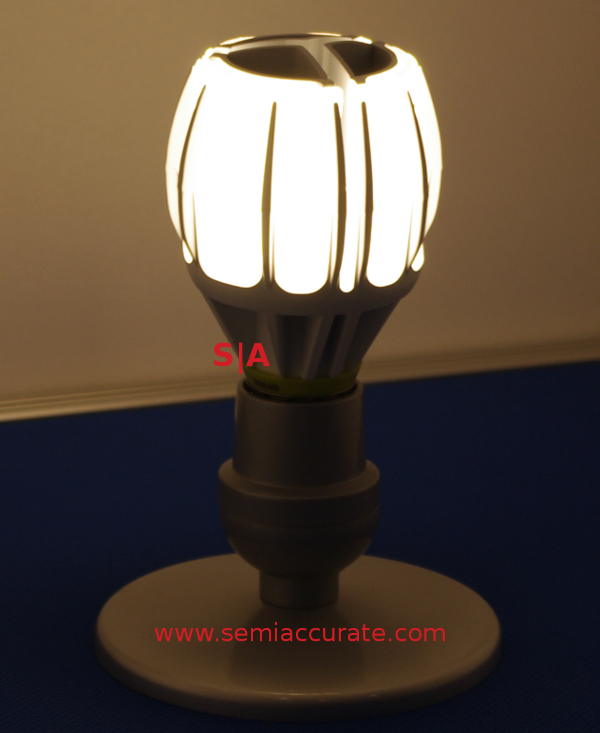 And lo, the engineers said … no, we won’t pun like that

Luckily it won’t be that expensive either with a promised price of less than $15, far less was strongly hinted at. The bulb in question in a 60W equivalent and the demos they lead me to believe it is fairly efficient in it’s power use. Rambus didn’t specify exact efficiency numbers, but they did say it would not be the highest efficiency part on the market. Given the price it isn’t a bad deal, especially since it is fully dimable unlike most others.S|A