Synaptics puts touch on the back of tablets

Synaptics had a really nifty tablet tech called Sensa, aimed at fixing multi-touch errors, on display at CES. The idea behind it is simple enough, detect and remove erroneous touches from the hand holding the device, and turn them in to useful input.

Like all simple concepts, Sensa is a hard problem to solve technically speaking, but Synaptics did. If you are holding a tablet, you probably have four fingers on the back, and your thumb on the front. If that thumb touches the edge of the screen, then a swipe elsewhere becomes a zoom or a shrink, and things get weird. How do you tell a finger touch on the front from a, err, finger touch on the front? Not easily.

The way Synaptics solved this problem is pretty cool though, they put a full touch panel sensor on the back of the tablet and detected where fingers were on it. If the back sensor sees four fingers, as seen by the blue dots in the picture below, one touch near the margins on the front sensor can be safely mapped out as a the hand holding the device, not a voluntary input. Once you are told how it is done, the solution is obvious enough, but no one had done it before Sensa. 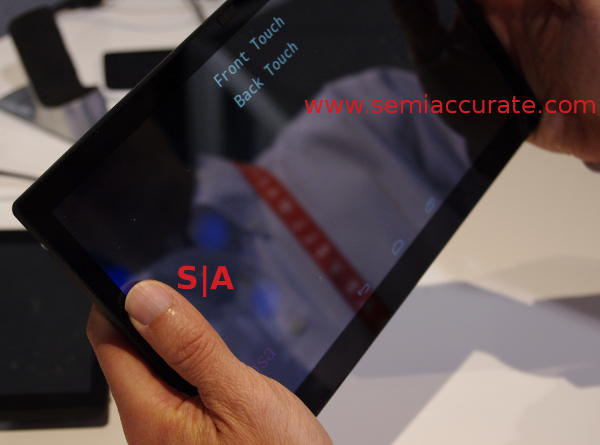 The blue dots are the fingers you can’t see

Once you know the position of the hand, you can do all sorts of tricks with what Synaptics calls ‘grip events’. You can make UI changes like one or two handed input modes, infer some use cases, and most usefully map out potential errors. The best one however is called dynamic margin control. This basically sees where your thumb is on the screen, maps the input out, and moves the margins over so the text is not blocked by it. There are two modes, one moves the whole margin over, the other pictured below just wraps text around your finger automagically. It is really nifty and useful, but not exactly a difficult thing to understand. 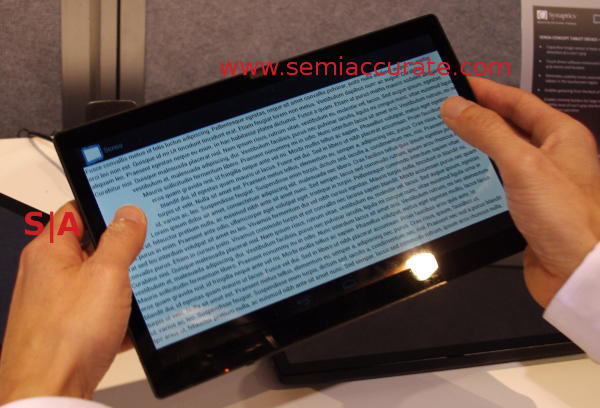 Magic is in the details, and the back sensor

One use case for Sensa that we hope Synaptics does explore is nothing more than a normal tea cup. This technology could easily detect the proverbial ‘pinky up’ position that is the bane of correct society and deliver lethal electric re-education ‘hints’ upon detection. Gesture error prevention and margin control are nice, but Sensa has the potential to do no less than help cleanse the gene pool with technological efficiency. Lets hope Synaptics decides to uses their advances for good, not just tablet frivolity.S|A