AMD puts out a cheap embedded APU development board

GizmoSphere is a cheap little board that packs a punch

AMD has released a novel little embedded dev board into the niche Rasberry Pi created, time to hack away. If you have ever wanted a full Brazos board in a 4×4 inch package, the embedded OpenCL system of your dreams has arrived.

The board is from an organization called GizmoSphere, you have probably never heard of them because they only officially exist as of this release. Take an AMD G-T40E, a dual core Brazos at 1GHz with a 280MHz GPU of unknown shader count, AMD’s docs are woefully inadequate here, and slap it on tiny a passively cooled board. Solder down 1GB of 1066MHz DDR3, add a single SATA port, VGA, 2 USB2, audio, Ethernet, plus two custom IO connectors, one high and one low speed, and you have most of it. The finished board looks like this. 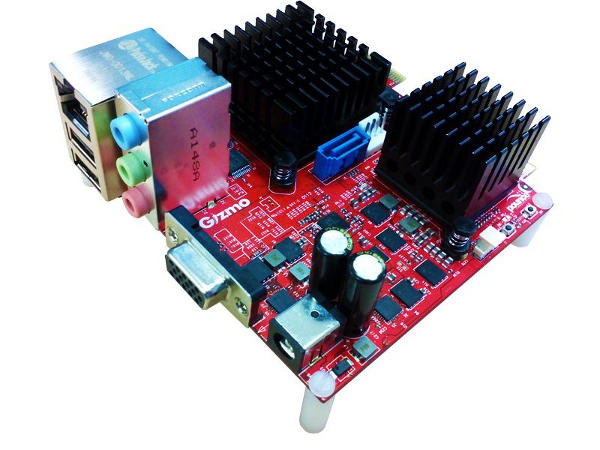 The high speed connector has two PCIe lanes, one SATA, one USB2, and a LVDS link. On the low speed side, it has a USB2, SPI, PWM, and a bunch of A/D and D/A lanes. This low speed link has an expansion board called Explorer that is a breakout and prototyping device. It has a little LCD, DC motor and stepper connections, GPIO, SPI, analog I/O, PWM and USB ports. It also has a large area for prototyping, basically a sea of holes and connectors to do mad scientist type things with. We hear AMD is considering a contest where the first person to make a sentient killer robot with one of these wins an AMD sponsored AAA game title. Stay tuned for the announcement possibly next week, but if it turns out not to be true, look on the bright side, you still have a sentient killer robot to play around with.

On the software and development side, AMD is partnering with Sage to put out a version of their SmartProbe hardware and software bring up and debug device for the Gizmosphere. Luckily, it has real OS support, not just Windows, so useful things other than sentient killer robots may come from this yet. Add in a Coreboot open BIOS and you have something quite hackable. On the down side, Sentient killer robots running Windows are probably a lot safer to be around, they can’t do much damage between malware infections. Six of one…..

In case you don’t get the point of all this, the idea is to have a small, low power board with a decent amount of CPU power and GPU power that few in it’s class can hope to match. The size is 4×4 inches, it pulls a claimed sub-10W, and has mostly open firware. Not bad for a claimed 50+GF OpenCL/GPGPU device. It is powered by a 12V DC source so it can be car mounted pretty easily, and includes all tools, software, and debuggers you will need for bring up and programming. All this for only $199, not bad, especially if you consider the cost of the hardware debugging tools. If you are in to this kind of thing, the GizmoSphere board is worth a long look.S|A