MWC 2013: mems|cam is better, faster, and thinner than before

SemiAccurate ran in to a company called DigitalOptics at MWC, they make an auto-focus phone camera based on a MEMS actuator. All the usual claims come with the device, better, faster, smaller, and lower power, but one thing you can say for sure is that it is quite innovative.

The idea is simple enough, traditional cameras have auto-focus mechanisms based on voice coils, a copper winding with a ring around it that moves up or down the more or less power you put through the coil. The movement is countered by a spring so as long as you apply current, it holds position. This has problems with stopping as it stops focusing and uses power to constantly fight the spring, prevent tilt, and keep accurate position. 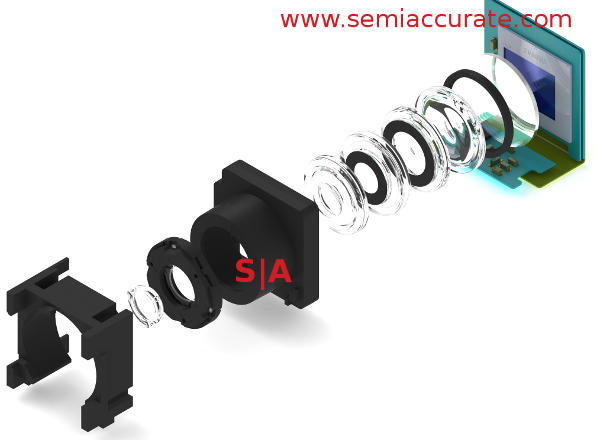 MEMS camera exploded, the actuator is third from the left

DigitalOptics does things differently, it uses finger actuators to move the whole module up or down eliminating most of these problems. It looks like two combs with the tines placed into one another, and when you apply power, electrostatic forces make them slide up or down relative to each other. All tines move at once, and they are on all sides of the moving platform, so if you engineer them correctly the actuator should move up or down in a linear fashion on only one axis.

It doesn’t tilt because there is no play in the moving actuator, the fingers essentially touch each other and all side move equally to prevent tilting. There is also no spring to push against so the actuator doesn’t have to fight any constant forces other than gravity, so no more wobble for a much faster focus time. Power is also down, from a claimed 100mW to 1mW with potentially higher peaks on both sides when the actuator starts moving. Once stopped however, the DigitalOptics solution has much lower draw. 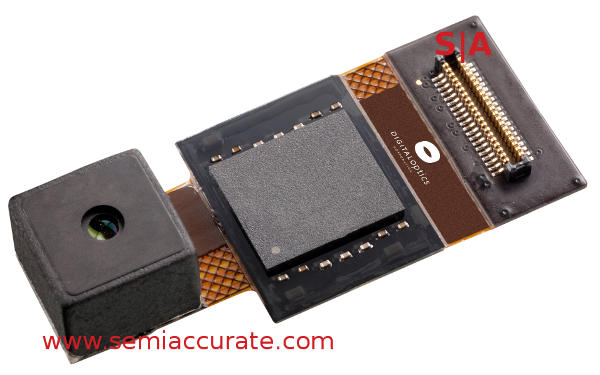 The mems|cam module is a full solution

The net result is a camera module called mems|cam, with DigitalOptics making everything but the sensor. What sensor is in the device is up to the device OEMs, they can pick and choose the silicon they want, then a custom actuator and lens assembly is built for it. Since each sensor is different and each camera has different focusing requirements, a one size fits all solution is not possible. That said, a current generation module is only about 5.1mm high, more or less depending on exact specs.

In the end the claim is simple, less power used means less heat produced, so less sensor thermal noise. Faster and more accurate positioning is good for video shooting and fast action sequences, plus you get less distortion from tilting. A more efficient mechanism also means longer battery life in a potentially smaller and thiner device. All this for a small price premium over the old way, but given the power savings that is a pretty fair trade.S|A