AMD’s Lightning Bolt technology is finally out in a product and it could be a very good thing for end users. Unless Intel quashes it like the last few attempts, this one should be a no-brainer on your next laptop.

Sadly the marketing people have renamed Lighting Bolt to the thrilling new name Dock Port, but that does nothing to change the inherent goodness of the technology. If you take a Richland laptop, add a $1 mux to pipe USB3 and DP1.2 out on one cable, you are half way there. Throw in a few FETs to allow the cable to power the laptop too and you are there. Thomas Ryan wrote up the technical specs here, take a look at the diagram in the middle for a good idea about what this can do. 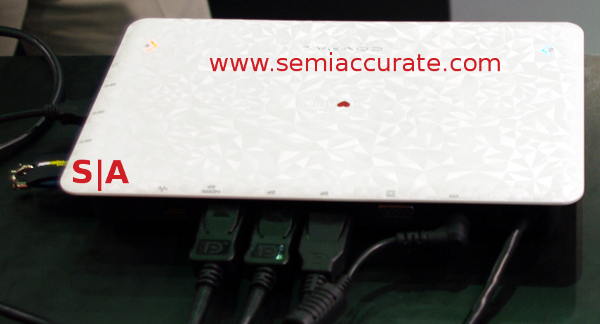 By adding $2 or so worth of components to a laptop, Dock Port allows you to connect up to four external monitors, 5Gbps of USB traffic, and power your laptop all across one cable. There are some caveats though, if you want four 1080p external monitors you lose USB signaling, but that is a fair enough trade-off. No other tech can come close to what this offers though so it is unquestionably better than anything else out there.

Since Dock Port uses standard signaling and a microDP1.2 socket, the cable itself shouldn’t cost much more than a normal DP1.2 cable. You are mainly just adding power so you need beefier copper for a few of the lines. Since it will likely replace a power brick, the added cost to a new laptop will be almost zero. The dock itself is much the same idea, use standard off the shelf bits and signaling so it is quite configurable.

Under the lid in the prototype above you have a USB3 hub chip, cost <$4, a PSU that is a net zero cost if you substitute it for the normal power brick, and a DP1.2 Multi Stream Hub which costs the better part of $100 at the moment. All in all if you want to make a Dock Port docking station you would need a bit more than the cost of a copper Thunderbolt cable in hardware, but only a small fraction of an optical Thunderbolt cable. Please note that we are not talking about the Thunderbolt chips, hub, or anything else, just the usually not included cables. With DP1.2 hubs dropping in price as volume ramps, it probably won’t be long before a dock port hub costs less than a copper Thunderbolt cable.

We do actually feel bad about comparing the two technologies directly though. Thunderbolt chips are only available from Intel and they are charging obscene prices for them. To make matters worse, they are never going to allow anyone else to make them, it is intended to be an anti-ARM/Tablet encroachment lock in for users and vendors, not a viable tech. Luckily for users it has failed miserably in the market. That said you need two $20 chips for anything Thunderbolt, one for each end. You also need to buy full controllers for the device or hub too, TB foolishly only passes PCIe signals. This gets expensive quickly and explains a good bit about the technology failing.

Thunderbolt as it stands now only passes two non-combinable 10Gbps streams. Dock Port has a 17.28Gbps DP1.2 link and 5Gbps USB3 for a total of over 22Gbps. Thunderbolt is faster for non-video uses but Dock Port creams Thunderbolt for video performance. TB can feed 10W across the link vs USB3’s 4.5, but that number will be bumped to 100W in very short order.

Once you tally up the numbers, a Dock Port hub costs a small fraction of what similar functionality in a Thunderbolt rig costs, but Thunderbolt can’t power your laptop. The cable may be a bit thinner but most users would trade a bit of thickness for, well, actually working. Wouldn’t you?

And that is the real message here. AMD’s Dock Port is a well thought out engineering tweak that costs low single digit dollars to implement on a laptop. It works well, was done for the right reasons, and is quite open. Thunderbolt is expensive and doesn’t actually work. It never came close to delivering on the promised specs, is incompatible with everything you want to do, and is shatteringly expensive. It isn’t even a fair fight technically or functionally, Thunderbolt is inferior on almost every comparable feature. This one is going to cost Intel a lot of MDF funds to sink.S|A