16 games benchmarked for your pleasure

Running around Taipei leads one to run in to very interesting people with interesting numbers like the upcoming GTX 770 benchmarks. SemiAccurate was just given some high rez benchmarks for the imminent (Tonight at midnight-ish, depending upon your timezone) Nvidia GTX 770.

A few notes first. Due to extreme lack of time we could only run one set of tests, so we cranked everything to the max, not an unwarranted proposition for this class of cards. They should be able to run all the games with everything on at 2560*1800, and that is what SemiAccurate did. AA/AF settings are listed, the notes are the level, and the version is the latest we could get our hands on at the moment. Everything is run on a Core i7 3970X with Win7-64 with 16GB of DDR3/1600. 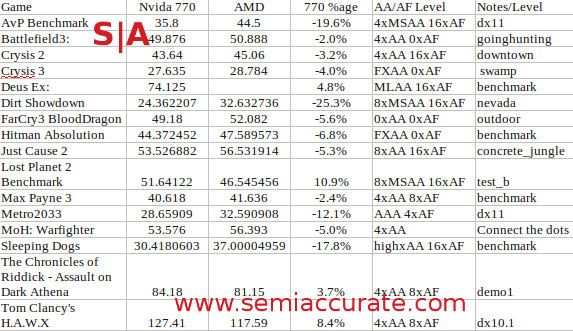 Nvidia cut us off so we aren’t embargo’d…

The 16 tests we ran were picked mainly because that is what we had available, not ideal but good enough. The numbers are the GTX 770 at stock clocks followed by the HD7970 GHz Edition. The next column labeled 770 %age is the speed of the 770 as a percentage of the HD7970 GHz Edition. Of the 16 tests runs AMD won 12 and Nvidia 4, but three of those four are pretty ancient and not really representative. Basically we had to go a long way back in the archive to find things that Nvidia is better at in high resolutions. It will be interesting to see where each reviewer tests at.S|A