Gigabyte may have finally found the fix for Intel’s moribund NUC concept with their Brix device, an AMD CPU. Even if you stick with an Intel CPUs there is another Brix that will make you sit up and take notice too, it has a projector.

Intel’s NUC device was an answer to a question no one asked with a price tag no one believed was real, it is simply a bad joke. While it costs a painfully high sum, it is slow, unexpandable, and generally does nothing a $35 ARM based Android box can’t do just as well. Intel swiftly addressed these problems with an updated version sporting a CPU so awful no sane person would buy it and it still cost far more than was reasonable. The NUC is a disaster that has no redeeming value but for some reason Intel keeps pushing this dead horse uphill.

Gigabyte however took a bad idea and made something good out of it with their Brix line, three good things in fact. Sure there is a standard Ivy Bridge model and they showed a Haswell variant at Computex too, but both are about as exciting as a NUC with differently rounded corners. This is in no way ironic because they are simply a NUC with differently rounded corners and will do about as well in the market as the failed original. The other three could possibly be the killer apps of this form factor.

Kabini Brix on the left, Haswell on the right, spot the differences

If you look at two Brixes you will see one difference, blue vs black front mounted USB ports. We don’t think there is a functional difference because Kabini does USB3 natively so it is likely just prototype hardware with non-final bits. That said, same box size for the Kabini and Haswell Brixes along with the same just about everything else. So why does the Kabini version work while the Haswell one is an abject failure? Price.

Let me be absolutely clear that Kabini is overkill for this type of box, a simple ARM/Android combo will do fine. If you need a full PC though, Kabini is more than enough to play 1080p movies, shuffle files, and render web pages on your TV. It is an absolutely adequate set-top box even if you burden it with Windows. Haswell has a vastly more powerful CPU, barely faster GPU, and a shatteringly painful price tag.

In case you can’t do the math, Intel wants $300 for the NUC with an Ivy Bridge CPU and Haswell costs significantly more than Ivy Bridge. The Ivy based NUC was a non-starter as a woefully underpowered PC that costs $600-700 without a market that wants it. At $100+ more Haswell brings nothing useful to the table unless you are an Intel stockholder. It is sheer folly. The Kabini version will cost easily $200 less and probably closer to $350 under the top Haswell version. I would be shocked if you couldn’t get a Kabini Brix barebones for less than $100 within a few months.

To put it another way you could buy two top Kabini Brix barebones boxes for the price of the lowest end Haswell CPU, not system but CPU. Both will do the same job as will a $35 Android system plus a little more but neither of them bring anything amazing to the table. An $800 Haswell Brix is a joke, a $400 Kabini Brix is borderline sane, if you don’t use Windows a <$300 Brix is possibly doable, and without a big SSD a <<$200 Brix makes sense. That said you can’t get there with an Intel CPU but you can easily get there with an AMD box. Intel is hopeless in this market while AMD has the right part at the right price. 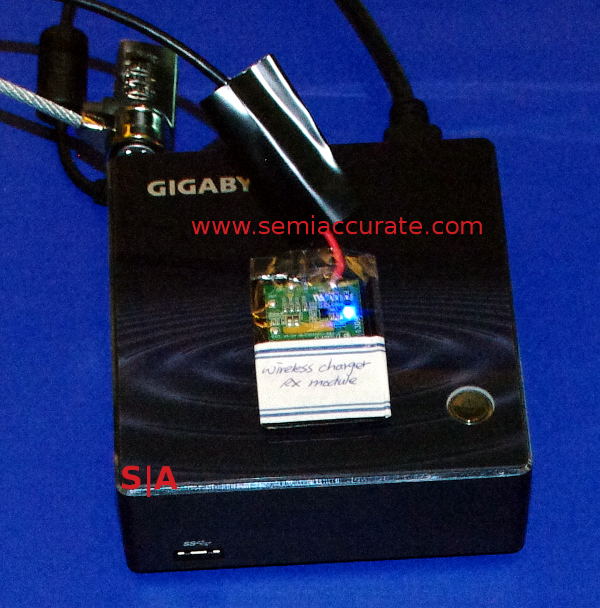 Under the hood is power, wireless power

The next one up may be Ivy Bridge based but it has a very useful twist, wireless power. It is a bit taller than the normal Brix to accommodate the module for that and contrary to Intel’s marketing claims the added height really makes no difference to anyone. Wireless power is a good idea in this class of device and is something we have not seen before. Plopping your phone on top to charge while you pull your pictures off, sync, and all the rest makes too much sense to ignore. That said a $700 charger is non-starter but a $300 Kabini version might be tempting. 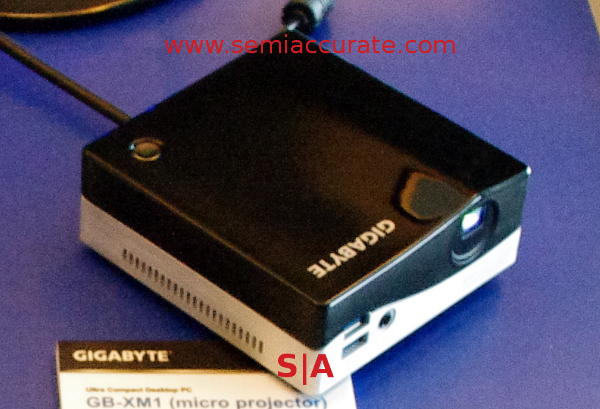 The last Brix is potentially a killer for business users and road warriors, it has a micro-projector built-in. It isn’t amazingly powerful but can put up a decent sized image on a wall or screen at a low but workable WVGA resolution, 800*480 to you and me. Inside it still has an Ivy Bridge but for road warriors a $700 (our unsubstantiated guess at the MSRP, Gigabyte wouldn’t even hint at the real one) Brix plus projector is a killer to have in your bag. Laptops are nice but this is a real PC and projector that almost fits in your pocket.

Think about it, you take your PC with you and don’t need a monitor or much else to do your job or show off your wares. Presentations no longer mean fiddling about with projectors in conference rooms, if you are lucky enough to have that option available, or crowding around a laptop screen. You just point the Brix at a wall and off you go, all you need is a keyboard and mouse if you don’t want to lug one around. The Brix with a projector is the killer app for this category, one that is more than good enough to overlook the absurdity of the Intel Ivy based NUCs for. Well done Gigabyte, damn good job.S|A