Synaptics was showing off three evolutionary technologies and one new one, all related to the human interfaces the company is known for. None of it will stun you with it’s novelty but all could very well make your next notebook a lot better.

The first thing that Synaptics was showing off is the Clickpad 2.0, the new version of the tried and true Clickpad. This new version is thinner, <2mm vs the older unit’s 3-4mm, stiffer, and crucially Synaptics does all the mechanicals instead of the OEM. This should prevent violently awful implementations of an otherwise sound technology like the miserable Asus notebook this is being written on. If Synaptics can prevent notebooks like this from coming out with Clickpad 2.0, all we can say is hurry up guys and start at Asus. 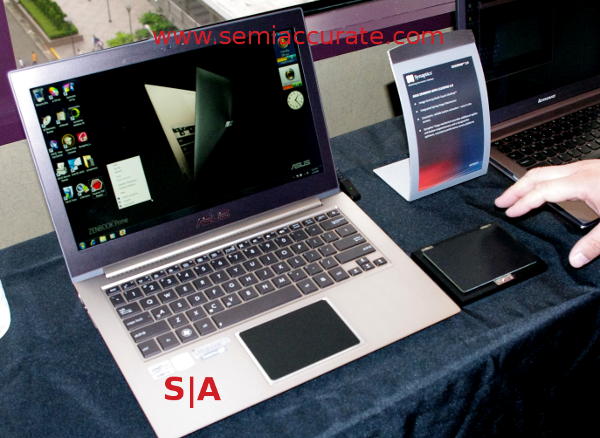 Clickpad 2.0 retrofitted to a notebook along side a demo pad

Related to this is a new version of the Forcepad we talked about earlier called, wait for it, Forcepad 2.0. The biggest advance the added 1.0 brings is something Synaptics calls Typeguard, essentially turning off the pad when you are typing. Luckily for potential users this is firmware based so no driver issues, and Synaptics claims it has the same performance as current Apple products. Once again if it prevents travesties like this Asus notebook where the pad has to be turned off completely, bring it on ASAP.

If you remember last summer Synaptics was getting in to a new area, keyboards. They showed off an aptly named Thintouch key and this time around they were showing off a new version not called Thintouch 2.0. It is still just Thintouch but instead of a single key, this one has a full keyboard and a backlit one at that, all in .7mm vs 1.0 for the older version. Going from 1 demo key to 64 in 10 months gives you a doubling time of 1.66 months. Extrapolating a bit on this, we can expect Synaptics to show us a .49mm thick 4096 key version with backlighting and a second new feature next April. That fact boys and girls is brought to you by both science and journalism.

The last technology is all new, the 7500 active pen controller. Synaptics showed demos of this technology last year, but there wasn’t much talk about how the tech was implemented. This time Synaptics is claiming that you need a single sensor layer for both touch screens and an active pen, both of which can use the same single controller above. The size of the module is determined more by the number of flex cable connectors than anything else, if you didn’t need solid mounting for the monitor connections the whole thing could fit in a few square cm.S|A