Computex 2013: Multi-monitors from lots to silly

Long time readers will recognize the name GeCube, and at Computex the company showed off a really different line of GPUs. If you are looking for multi-multi-multi-montor solutions GeCube probably has an answer for you.

The nice thing about the GeCube booth was that there wasn’t just one card with a borderline silly number of monitor ports, every card they had on display had borderline silly output counts. Not only that but the outputs varied quite a bit, you could have eight VGA outs or eight DP outs, 12 if you really need that many. If you want a lot of monitors, they have a solution for you. 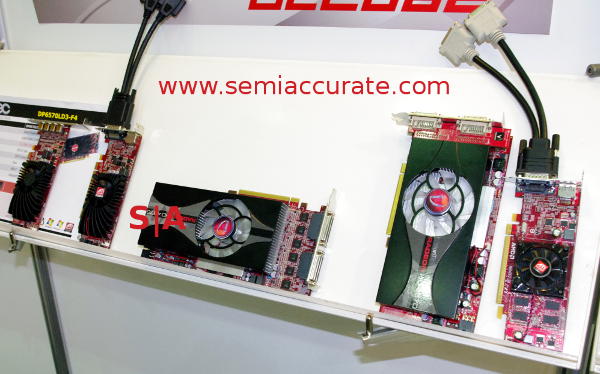 The lineup all has one key feature, outputs

If you look at the GeCube line you will see two types of cards, those with one and those with two GPUs. This isn’t CrossFire as found on the high-end gaming GPUs, it is more akin to two separate GPUs on a single PCB. The other thing you notice is the sheer number of monitor outs on every one, some on the end plate but most on a dongle or two. GPUs range from the low side of mid-range to the low side of high-end chips, currently picked from the HD6000 and HD7000 range. The power offered won’t stun a gamer but it is more than enough to drive six 1080p monitors for signage or display walls.

If you are wondering how this differs from AMD’s Eyefinity, that is an easy answer. Eyefinity has a very limited type of monitor outputs, mostly mini-DP on current devices. For some odd reason, most people don’t have DP1.2 monitors lying around, and most don’t have DP on their TVs at all. What do you do if you want to use your four or six VGA or DVI monitors on a modern GPU? Call GeCube for one thing, they have a solution.

That is where the other nice thing they bring to the table comes in handy, they offer a range of display outs for every type of card, take your pick of VGA, HDMI, DVI, or DP with 4-12 outputs depending on the model. For 12 outputs the card pictured above, ironically a prototype that uses a HD4870 heatsink and shroud, has two HD6870s on it. Each one of those connectors has a dongle with six display outputs on it.

If you look closely you will see that there are six chips between the outputs and the heat sink. These are they key to the card, they are active signal converters. Depending on which one GeCube uses, they offer IDT and a few other vendors, you can get whatever outputs you want on the GPU. While this does add cost to the device it isn’t that much and is certainly cheaper than buying three more cards.

In the end the specific models that GeCube offers don’t really matter much, the sheer number is far more important. If you want lots of outputs in a single package they probably have what you need. The offerings range from average speed GPUs to quite snappy even with 12 1080p monitors hooked up. These are not for gaming mind you but should be more than adequate for everything else. Worth a look for those interested in video walls and signage applications.S|A