PGS is the new wonder material for devices

Panasonic was showing off one of the most incredible heatsinks on the market, 10µm ‘thick’ carbon sheets with 95% the conductivity of diamond. If you think that is impressive, the sandwiches they make with it were even more interesting.

At first the Pyrolitic (Highly Oriented) Graphite Sheet or PGS looks like a bit of dull grey cloth with no more sheen than an average cheap suit. If you pick it up it feels more like a lint-free screen cleaning cloth, quite soft, a bit slippery, but with none of the weight found in a screen cleaning mat. It really weighs nothing or next to nothing. This ~2*2 inch square cloth didn’t attract much attention at SemiCon in a hall full of industrial robots and wafer juggling mechanical arms but it should have. 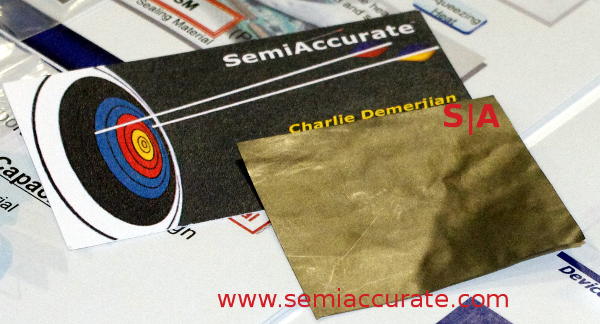 The PGS is Panasonic’s newest weapon in the smartphone wars and it will change how things are done. If you want a heatsink for a PC you take a massive chunk of aluminum or copper, slap some heat pipes on it, and then put a 120mm fan or three on all sides of the radiator that the heat pipes run in to. These are very effective, the Gelid versions at Computex would dissipate over 200W or 198W, more than needed for a cell phone. At 15cm or so tall, they would be a tough fit in to the next iThingy even if thickness restrictions are relaxed in the post-Steve era. 15cm stuffed in to less than 1cm is a physics problem few companies attempt.

Aspersions aside, cell phones are getting thinner, internal volume is getting lower, weight is a large concern, costs are tightly controlled, toxic materials are frowned upon, and physical assembly is problematic. How is a phone maker supposed to deal with the ever-increasing heat generated by the latest cell phone components in light of this? If you ask Panasonic the answer is PGS and from what we have seen it is a very good answer indeed. Why? Everything about it really.

PGS looks dull both literally and figuratively. It is a heatsink or more technically speaking a thermal transfer material. It doesn’t actually hold much heat mainly because it is so amazingly good at moving heat but Panasonic has PGS related solutions to this problem too. What it does do really well is take heat from a device hot spot and spread it out along two, not three, axis. 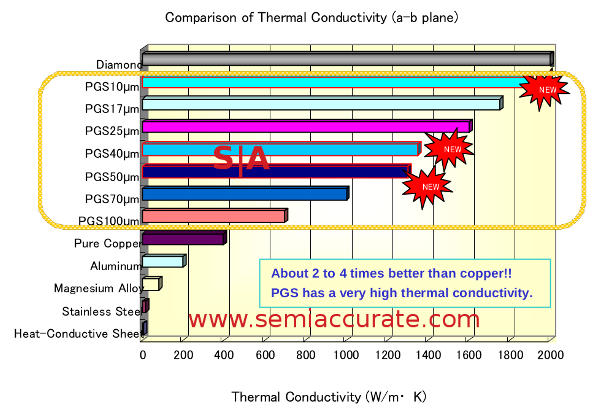 Could it get any better? If you think about it, diamond is a bit tricky to work with. You can get diamond or diamond like coatings (DLC) fairly readily but they tend to be quite hard to apply. Most require a lot of heat and pressure to bake to a surface and aren’t really well suited for electronics or organic PCBs. If you buy sheets of diamond it is not very flexible so you had better make sure your phone has every component perfectly flat. One tiny crack will make it all a moot point so don’t flex that phone either. Lets just say diamond isn’t all that useful for electronic heat spreading at the board level, it may be thin enough but not cheap enough or assembly friendly for volume devices.

Copper is good as it can be made very thin, is ductile, and is pretty cost-effective too. There is a problem however because of its conductivity, be careful what it touches. Copper is also an EM shield so if you use it over a large area it tends not to be a good idea if you want to get radio signals in more than a 180 degree arc. You probably don’t want a full copper foil lining on the back of your PCB or phone case. If used judiciously and carefully though it is more than good enough for many phone and tablet applications.

Dots on the bottom are heaters for the PGS, Cu, and Al strips

But as things get thinner, hotter, and lighter the need to do better just increases. PGS is the ideal solution, 2-5x the performance of copper and it is astoundingly thin. How thin? The worst version, 700W/m, is 100µm, the best at 1900W/M is only 10µm. That is astoundingly thin, from the thickness of an average human hair to 1/10th of that while remaining as flexible as soft cloth. You can take your PCB, drape a PGS sheet on it, and clamp the backplate on as hard as the electronics will take. If there is any extra hanging out a seam you can just cut it with scissors, no problem. PCBs with components at uneven heights or things jutting out can just have the PGS draped over them. Camera modules can simply have a hole cut for them too, it couldn’t be easier.

If you want to go all out, you can put multiple PGS sheets in your phone. One behind the screen to eliminate hot spots that discolor the LCD, one on top of the PCB and one behind. If you attach it to the case with a thermally conductive adhesive, the entire back of the phone will be a cooling fin. One on the LCD will do the same for the front too. If you want to be really tricky you can use one sheet for the front and the back, just fold it over. This may sound pointless but think about using a metal LCD cover on a laptop as a cooler. Why wasn’t that done in the past? How do you transfer heat across the hinge, lots of bending doesn’t work well for traditional thermal transfer solutions, PGS however is not affected, it has promise here too.

All is not perfect with PGS though, if you recall we told you the heat transfer numbers were astounding in the X-Y plane, but only in the X-Y plane. If you look at the Z-axis things go from 1900W/M on the 10µm version to 10W/m or 1/190th of that. On the 100µm 700W/m PGS sheet the Z-axis transfer is about 26W/m, still a small fraction of the main plane. If you want to take the heat out of the PGS sheet, you need to do it along the edge or over a large area. Luckily for PGS, heat from any single hot spot very quickly become evenly distributed so this isn’t a big deal if you put any forethought in to getting heat off of the device. That said you do need to design for heat removal, not just transfer.

Panasonic makes more than just PGS sheets, they have lots of different products for differing applications with three main types, PGS + TSS (Thermal Storage Sheet), PGS + SSM (Semi Sealing Material) and PGS + Cu (Copper), all with very different uses. Each one is a sandwich consisting of a thermally conductive adhesive, PGS, then something else on top, plus a sealant or other optional layers on top. All of the layers are customizable for thickness, some like adhesives are optional, and a few can be added as extras.

TSS is what its name sounds like, a heatsink material but a flexible one. It runs 200-650µm thick and has the PGS bonded to one side to pull energy out and hold on to it. It has a large contact area with the PGS and so it can pull off lots of the heat quickly to even out device temperatures Since transistors take more energy to switch when hot, this can actually reduce device power use.

PGS + SSM is a completely different coating used mainly to protect the devices and PCB it is put on top of. Think of the SSM as a thick spongy goop that conforms to the PCB and components while offering them some environmental protection by somewhat sealing them. It is conceptually similar to foam backed tape for insulating doors and windows, it follows the form of what you put it on and should contact all surfaces flat or not. You can get SSM sheets from .5-3mm thick, enough to cover most surface mount components in a modern device.

SSM is obviously thermally conductive, it would be pointless to put a thick sealing foam insulator between the hot bits and the PGS which gives it a very interesting feature. If it touches most of the device surfaces be they components, PCB, or whatnot, it can pull heat off the PCB itself, a major concern in some markets. It can also prevent heat from going out the back of the PCB, again a major concern in some markets but not others.

Don’t forget that the most direct path for heat from a device is not out the highly insulating plastic or ceramic chip package but through the nice metal thermally conductive pads or pins on the bottom. More heat is usually transferred through the bottom of the device than the top so pulling energy from the PCB is a very good thing. PGS + SSM is a really interesting solution to this problem, the other is to put heatsinks directly in contact with the copper shielding plate in the PCB like Corsair does.

The last sandwich bonds a sheet of copper to a PGS sheet with electrically and presumably thermally conductive adhesives above and below. The idea is that things in a phone or device that do need to be shielded from EM noise can be shielded with a very thin and flexible layer. The copper and adhesives are only 30µm thick plus the 10-100µm for the PGS. This can replace either a metal EM shield over some sensitive components or even the metal case for the device itself.

Instead of spraying metal on the inside of a plastic case or worse yet using much thicker sheets of shielding materials, PGS + Cu can do it all. Better yet it can also be the thermal solution for the device in question at the same time. For the reasons mentioned above, you don’t want to put PGS + Cu over everything if you want your radios to actually work, but judicious uses of PGS + Cu could go a long way toward making a device lighter and less error prone.

In the end, PGS seems like a wonder material because it really is one. It has 95% of the thermal performance of diamond, the best possible material for thermal conductivity, is flexible, non-toxic, and easy to work with. If you want differing properties you can just make a sandwich with other materials like TSS, SSM, and copper. While Panasonic may not change the world with PGS, it will very likely make mobile devices both better and thinner.S|A