Intel comes out with a Quark based Arduino board

Better yet the new CEO is one of us

About the time this article goes live, Intel CEO Brian Krzanich will be making a speech at Maker Faire Rome about their Arduino compatible board. Called Galileo, this board features a Quark X1000 SoC and should retail for less than $60 when it becomes available next month. It looks like this. 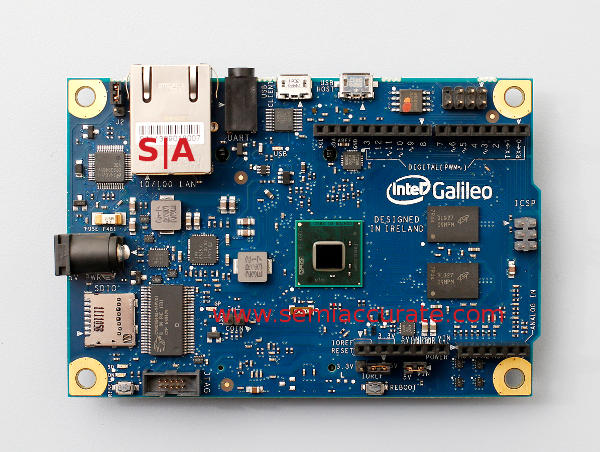 Quark X1000 is a bit bigger than its namesake

As SemiAccurate exclusively told you last month, Quark is based off a P54C Pentium CPU with all sorts of added bits surrounding it and the chipset pulled on die. Officially it is a “32-bit, single core, single-thread, Pentium® instruction set architecture (ISA)compatible CPU, operating at speeds up to 400MHz” but not officially a Pentium on steroids. The Galileo board is compatible with Arduino Uno R3 shields and supports 3.3 and 5V operation. Better yet the initial data sheet is a promising start. 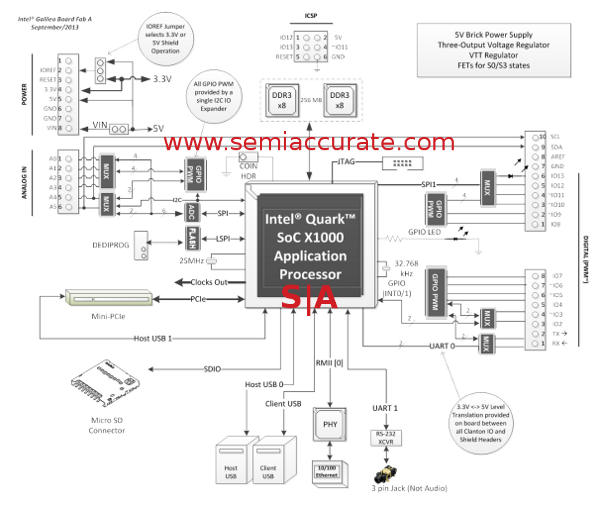 If only all docs could be this good

For those of you who think like us, when you are out on day leave you might want to check out maker.intel.com and www.intel.com/support/go/galileo for more. Short story it is a 400MHz Pentium P54C, 32-bit, and with PCIe capabilities. Also new are 10/100 Ethernet, USB2, SD card capability, an RS-232 port, and JTAG headers. Galileo has 256MB of DDR3 and for storage there is 8MB of NOR on board so you too can build a cheap and open source 50 foot tall death robot, just not a very smart one that remembers a lot.

While the Quark X1000 isn’t an amazing chip that will change the world, a $60 x86 Arduino board has quite a bit of promise. Intel having a maker as a CEO has even more promise. If this is the beginning of what we will see from this pairing, things may be looking up for Intel. What do you think?S|A