A look at most of AMD’s R7 and R9 lineup

Four of the Six from Hawaii plus a mystery new card

AMD’s webcast went over the positioning of the cards and Thomas Ryan went over which ASICs were in which cards last week as well. The short story, and this has not been confirmed by AMD yet, is that the only new silicon in the bunch is the 290/290X aka Hawaii. The new addition is at the bottom of the stack, it is called the R7 240. Lets go through them all one by one. 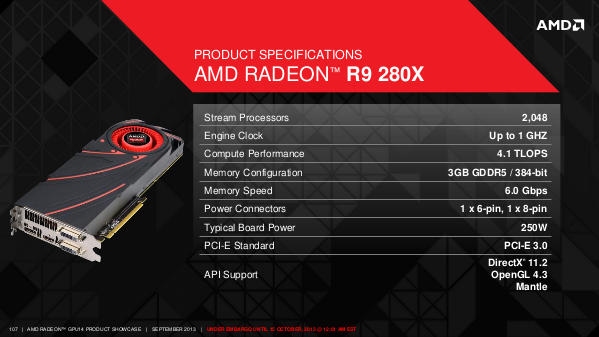 The most powerful of the bunch is the R9 280X, at least until the details of the 290 cards come out. This one has 2048 GCN shaders, 3GB of GDDR5 @ 6Gbps, and pulls 250W. If this looks to you like another tropical Island called Tahiti that would be bang on. 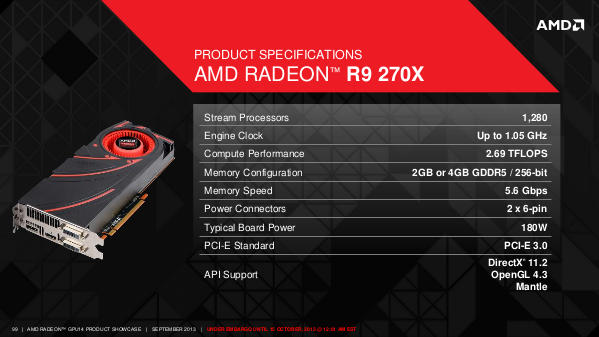 One step down from there is the R9 270X that is almost assuredly a Pitcairn XT running slightly faster clocks, 1050MHz vs 1000MHz, than the HD7870 GHz Edition it effectively replaces. Please note that the HD7870 in non-GHz Edition guise was based on a Tahiti LE and is an entirely different kettle of Poi. It all can be yours, minus the kettle of Poi, for $199. Being the mid-rage SI ASIC it has Crossfire but alas no TrueAudio. 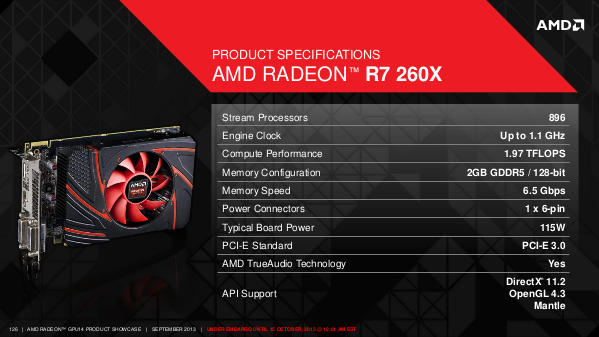 The big change from the 270X to the 260X is the prefix with the 260X being the top R7 card. This one is positioned as the GPU of choice for non-hardcore gamers, an all around device that also can hold its own on games. Since it has both a Crossfire connector and TrueAudio, that would make it a CI chip. Since there is only one CI ASIC called Bonaire, any guesses as to what this $139 card is based on?

R7 260X is a very interesting play on AMD’s part, the inclusion of TrueAudio really surprised us. In its previous incarnation as an HD7790, Bonaire was a solid mainstream part but TrueAudio was nowhere to be seen. Other than a few fuses here and there the silicon hasn’t changed so you have to wonder if some clever driver hacks might pay dividends for HD7790 owners. Either way the R7 260X is a stunning deal for the audio geek, or will be with some near future audio software. 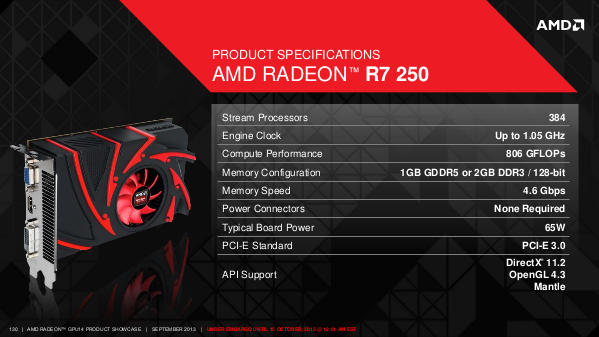 Once you start losing prefixes or suffixes it is usually safe to say a device isn’t aimed at enthusiasts. The R7 250 with no X is exactly that, a $89 card that likely sports an Oland GPU also known by the HD8570 and HD8670 names. In this case the specs are closer to the HD8670 version, not that there is a lot to differentiate them. This <$100 market has been obliterated by the integrated GPUs in AMD’s Llano and Trinity CPU/APUs and Intel’s Sandy Bridge, Ivy Bridge, and Haswell CPUs so don’t expect new chips here. This category will likely exist as upgrades to older and low-end machines for a bit but fireworks will be distinctly lacking. 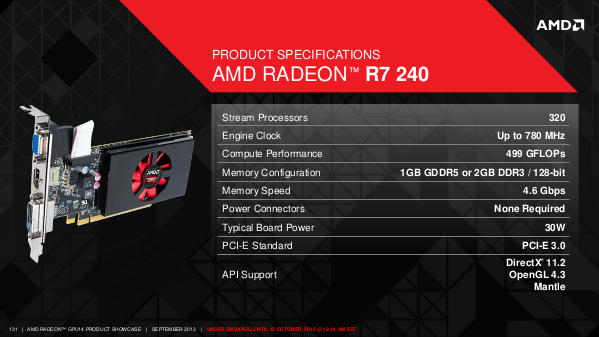 Last and for once actually least we come to the R7 240 GPU, a card not mentioned in the AMD Hawaii webcast. This is a fitting tribute for a $69 or less part, one that will make a worthy price shopping deal for those wanting another monitor out at the lowest possible price. The 320 shaders and inclusion of PCIe 3.0 rule out Turks LE aka HD7510 (OEM) so this one is probably a cut down Oland of one sort or other. Whatever it is, don’t lose much sleep over it unless your grandmother needs a video card upgrade and needs DX11.2 compatibility from some odd reason.

So in the end AMD is fleshing out four of the six R7 and R9 cards revealed in the Hawaii webcast but not talking about the two that you want to hear about. In addition you get a bonus card at the bottom of the stack called the R7 240, long may it provide low-end upgrades to the price conscious. Until AMD reveals the R9 290 and 290X, these newish cards range from $69-299 with all important price points covered.

All of these cards are rebrands with slight clock differences on the core and memory, but there is one exception. That would be the R7 260X aka Bonaire which added TrueAudio and a 500MHz memory speed bump. That alone is worth buying over its Bonaire based HD7790 predecessor even if the older ones are discounted. Other than that you are probably best served viewing the older HD7xxx versions of the same chip as equals and shopping based on price. That said the best is yet to come.S|A