LSI just released the SF 3700 line of Sandforce flash controllers with a little better everything and two big additions. While it doesn’t do anything radically different this time the new line signals the last gasp for SATA.

As far as products go there are four new sub-lines, each from the same ASIC. The low-end SF3719 supports SATA or PCIe2x and has the smallest feature set. Up one model to the SF3729 gets you a few more features but no big changes, both of these models are aimed at laptops and portable devices. The SF3739 ups the ante to PCIe 4x and adds “full power fail” aka a supercap or battery backup which takes it out of the running for the mobile space. SF3749 is the top end which has a “full enterprise feature set” and scalable PCIe so it is aimed at the datacenter crowd. 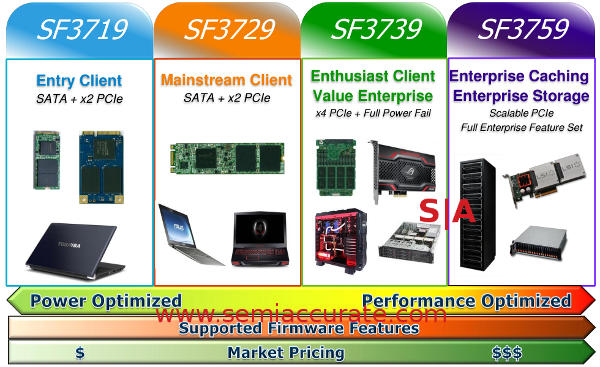 In essence the main points of differentiation in the line are PCIe width and firmware used, they probably don’t even need to blow a fuse. What is more interesting is that the same ASIC used for the controller has four lanes of PCIe and a full SATA controller. This takes up a lot of die space especially considering the lower numbered parts are cheaper and usually sell significantly more than the next model up. LSI is eating a lot of die area on I/Os and PHYs that stay dark on the majority of devices sold.

We asked LSI about this and they confirmed it was area that could be saved with multiple dies but doing it with one saves OEMs significant validation and firmware coding expenses. Ironically the one die, even with the unused area ends up being a net cost win for everyone even if it is counterintuitive. For the record the SF3700 is built on a 40nm process. The scalable part of the SF3759 was not explained but we will drag it out of them later this week at AIS, our bet is you can gang them to fake a wider interface.

The biggest change to the SF3700 architecture is that the family is now ‘modular’ in it’s design, or at least comes in three logical pieces. These are the front-end, core, and back-end basically separating out flash interfaces, PC interfaces, and the core processing and control functions. Since PC interfaces change slowly that block probably won’t be swapped out soon but we are in an era of new storage paradigms with PCIe/NGFF/SATAe so who knows? The flash side will likely change with each new shrink bringing a new something or three, flash vendors like to do that. The middle part is the core and that probably won’t change much at all if ever. Sandforce did it right the first time and only changed the core once previously mainly to add new features.

So what does the new SF3700 line bring to the table other than modularity? PCIe is the biggest bang by far, and that will change the entire industry. The other one seems like a little bullet point but what Sandforce calls RAISE Level 2 is a big deal too. Of much lesser import is the added error detection and correction called SHIELD which we covered in detail here. The rest is evolutionary, a bit better garbage collection, lower latency everything, and better everything else even if it is only a minor change. Still it all adds up, things like lower power and TCG Opal are useful.

PCIe is going to change the world of storage for two reasons. First is that a PCIe3 1x lane is faster than a SATA6 lane, 8Gbps vs 6Gbps ignoring overhead for simplicity. Better yet you can gang PCIe lanes, notice that Sandforce starts with two and goes up from there. That means a PCIe3 2x based flash device is well over 2x the speed that the best SATA6 device can hope to deliver and can scale far higher on a whim. SATA is dead.

The other bang from the SF3700 series is the RAISE Level 2. You might recall that RAISE was essentially RAID for flash, it striped parity blocks across channels and took a little bit of space from each chip to support error correction. Level 2 brings a ninth flash channel to the mix allowing a full spare chip, more space to write parity, more bandwidth to do so, or all of the above at once.

It allows for graceful recovery from a dead chip, something that earlier devices couldn’t do at all. Better yet the SF3700 can reallocate data on the fly to provision another spare after a failure so for the cost of space you can survive multiple dead dies. For enterprise work this is a really good thing, bricked drives are not taken lightly in the datacenter and annoying phone calls usually ensue.

That is the SF3700 line in a nutshell, one ASIC to scale from craptops to enterprise servers with a simple firmware update to change things over. One chip to qualify makes life easier for OEMs but one chip also means lots of wasted area too. PCIe brings the biggest change for the good and RAISE Level 2 brings reliability features that the high-end considers table stakes. In the end the Sandforce SF3700 is mostly evolutionarily while adding support for industry wide sea changes. All in all it is a good thing, faster and more reliable always is.S|A