CES 2015: Everything we said it would be and nothing more

It looks like Intel is trickling out another batch of Broadwells and it is everything SemiAccurate said it would be. If you recall our older stories, we got the problems bang on, others are still clueless.

Lets start out with what Broadwell is, essentially a 14nm shrink of Haswell that is a bit over a year late so far and the real versions aren’t going to be out for another few months. What we have so far is the 2+1 and 2+2 versions, that is cores plus GPU blocks in Intel speak. These used to be known as GT1 and GT2 but this new naming scheme makes far more sense. The ones that matter, 2+3, 4+2 and 4+3 are still not with us even if they are being announced today. Lets look at what Intel is delivering now and talking about for later.

15W Broadwells are out now

More 15W Broadwells that are out now

28W Broadwells that are not out now but are announced now

There are two groups of CPUs released, 15W and 28W, all with the -U suffix which was previously reserved for the 15W parts. There are no SKUs this time around with >28W TDPs, something that will probably be spun as a good thing. Don’t buy it, there is a very good reason why they don’t exist, it is not a clever marketing ploy. More on that in a bit.

On the 28W parts the graphics are all labelled “Intel Iris Graphics 6100” meaning 2+3 with nothing disabled and Crystalwell-like DRAM caches. Don’t expect games to run though, having tried it recently all I can say is the drivers don’t crash but don’t offer much above “not crashing”. Functional transparency will not come from a shrink, come on Intel… On the 15W parts things get more interesting with three different levels. Those would be “Intel HD Graphics”, “Intel HD Graphics 5500”, and “Intel HD Graphics 6000/6100”.

Here is the interesting part though, take a look at the caches, they range from 2MB to 4MB and track the GPUs more than anything else. While it isn’t a 1:1 relationship, the 2+1 parts are all 2MB while the 2+2s  and 2+3s are all 3MB or 4MB. Unfortunately the cache on the 2+2 does not correlate well with the GPU branding level, that would makes sense but at least we know the method for Intel’s artificial fusing of ‘value’. Before you bring it up in the forums, cache is absurdly repairable and I doubt Intel got the math so badly wrong that we are seeing yield problems crop up here, this is marketing pure and simple.

For the trivia buffs out there, Intel was very nice this time around and actually included not only die sizes but actual comparisons to Haswell. The 2+1 Haswell was .96B transistors across 131mm^2 while Broadwell is 1.3B transistors in 82mm^2. For the 2+2 the same numbers are 1.3B in 181mm^2 vs 1.9B in 133mm^2. Since the overwhelming majority of the changes are in the GPU, expect the 2+3 to sport ~2.5B transistors in ~184mm^2 plus or minus a little for possible added cache. That would put the 4C models at ~+.7B transistors and + 31mm^2 give or take a few mm, again dependent on cache changes.

So what does Broadwell bring to the table other than 14nm transistors that almost work as planned? Essentially nothing really, this one is a dog. How bad is it? There are literally no slides with benchmarks this time around, out of 41 pages there is only a vague comparison to Haswell. How vague? 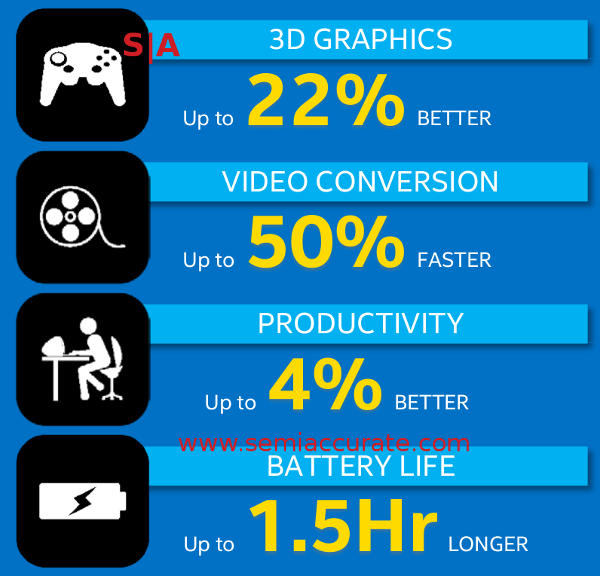 Yup, video conversion is up a whopping 50%, the graphics are 22% better, at best, and productivity, aka CPU performance is “Up to 4% BETTER”. Battery life is a claimed max of 1.5 hours longer but this has precious little to do with the CPU at this point, it is more the rest of the platform. In short Broadwell can’t get out of its own way if you hit it with a stick, just like we told you.

Intel however goes to great lengths to talk about the ‘platform features’ that Broadwell brings to the table. Of those only one is actually a Broadwell feature though, and barely at that. It is the new DSP/sound/wake-on-voice block in the south bridge. If you pair a Haswell with this chipset it will have the same features, Wake on Voice and Waves/DTS post processing (driver dependent aka only Windows). The rest of the feature list includes a new Wi-Fi adapter called Wireless-AC 7265, Wi-Di supporting 5.1 audio, and that’s about it. The six users who both bought a Wi-Di capable TV and are aware they did will now rejoice that their expensive TV is now obsolete, you should have gone Miracast.

Sadly that’s about it for the up sides but the down sides are really bad this time around. Lets start out with the “we told you so” bit. Remember when SemiAccurate said that Intel was going to use Broadwell to cut GPUs out of the market? Remember when we said there would be no socketed versions of Broadwell consumer parts? Remember how everyone else said we were wrong and Intel went on a sleazy disinformation campaign trying to confuse journalists about a single non-consumer part (Broadwell-E/EP) which would be socketed? Remember we said PCIe2 to meet the letter of the law but skirt it’s intent? 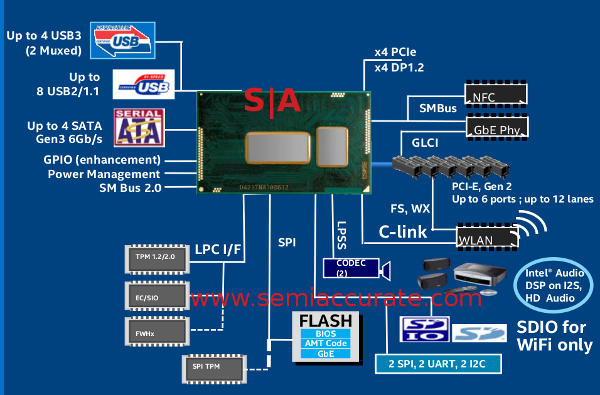 Look at the top right hand corner of the above picture. “x4 PCIe” is listed as is “PCI-E Gen 2 Up to 6 ports ; up to 12 lanes”. First off lets bring up the fact that the “12 lanes” are south bridge connected and take up more bandwidth than the CPU<->SB link has. If you plug a GPU in there it will both crawl and hammer your network throughtput and wireless speeds to the point of being almost non-functional. In short it won’t work. The four lanes off the core are for some reason not listing PCIe3, but Intel says they are PCIe3 signalling. We will try and confirm with them if it is running at full clocks though, we forgot to ask during our briefing.

This is nothing more than cutting AMD and Nvidia out of the notebook market while meeting the letter of the law just like we said. 4x PCIe lanes is barely enough to run a GPU off of if you don’t game, but the Intel GPU is enough for that too, what a coincidence, eh? Better yet if you want NVMe/SATAe drives, guess what you need to use? Yup, storage or graphics, just like SemiAccurate said two years ago. Evil but technically legal.

From here there is a bigger problem though and since no one other than SemiAccurate has reported the base issue in the six months since we broke the story. Lets take a look at the most serious problem for Broadwell in more detail and take a few shots at why it is so broken.