Mediatek had a fair number of goodies to show at MWC including new hardware, software, and devices. There was even a chip for the wireless charging enthusiasts out there, a fairly complete set of offerings.

As it is the big news, lets start with the wireless charging, specifically the MT3188 that was announced last year at MWC. This year the chip is an actual product, one that will meet all your wireless charging needs for the mobile device space. By that we mean it can provide up to 5W via A4WP, WPC, or PMA, that would be all three of the major standards. On the up side it looks pretty good, on the down side it will probably be hidden from view in devices. 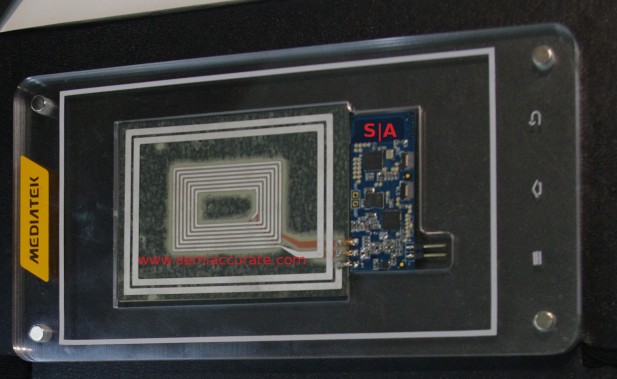 Wireless charging in all its spiral glory

In the SoC space there are three new items to talk about, two are silicon and one marketing. The marketing side is easy, Mediatek SoCs now have the brand name Helio with a P or X prefix. A leading P stands for Premium Performance, a step down from X or Extreme Performance. Both of the new SoCs the company announced probably fall into the X part of the market.

That brings us to the new MT6795 now known as Helio X10. This new SoC is an 8-core A53 based chip running at up to 2.2GHz, an interesting departure from the normal 4x A57 + 4x A53s. On the graphics side we have an Imagination G6200 plus hardware support for h.265 at 4K/30. The GPU is capable of pushing a 2560*1600 (4MP) screen plus Mediatek supports 120Hz screen refresh on devices. At MWC they were demoing this for smooth scrolling and video playback, nice to have for premium phones.

The other new SoC is called the MT8173 and it sports the new ARM Cortex-A72 cores, two of them backed by two A53s. Like its older brethren it uses an Imagination GPU but ups the game to a two cluster GX6250. On the video front there is the same h.265 4K/30 support but interestingly there is now hardware for VP9 plus 4K HDMI outputs. These last two could prove quite interesting. Throw in a Cat 4 modem, Mediatek promises Cat 6 later this year, and you have a fairly compelling high-end SoC but no word on which letter prefix, P or X, this one gets.

Another major topic for Mediatek at MWC was software and features, the 120Hz refresh rate being a key example. The next big one was called MiraVision and SmartScreen, essentially a video enhancement technique that saves power. Normal phones will read ambient light conditions and adjust the backlight of the screen to keep the picture looking correct, something that sucks battery power quickly.

MiraVision/SmartScreen uses the GPU and/or ISP to adjust contrast in the image to enhance the picture quality for differing light conditions. In essence it works on perception rather than gross physical changes and takes less power to accomplish the same thing. Other companies have demonstrated similar capabilities in their SoCs too and those likely work in a very similar way. No matter how you get there, not cranking the backlight up should save quite a bit of energy.

Next up is something a bit more nebulous called CrossMount, a framework on top of DLNA for feature sharing. CrossMount enables a device to discover features and capabilities other nearby hardware has and remotely use that capability. If your phone lacks a 4K/60 VP9 decoder but your tablet has it, in theory CrossMount would allow you to mount said encoder and stream video to it for encoding.

Bandwidth concerns aside it is an interesting concept that if implemented properly could open up new possibilities on the device front. SemiAccurate thinks it won’t get much traction until it is a real open standard though, why would competitors want to support a Mediatek controlled API? If CrossMount becomes an independent and open standard, the possibilities it unlocks are quite staggering. At the moment we will file it under, “interesting ideas that very well could be the next big thing if handled properly”.

Last up is one for the developers, the Mediatek LinkIt ONE and Connect 7681 boards. The ONE is an Arduino board with a MT2502A 260MHz A7 core, GSM, Wi-Fi, Bluetooth, GNSS, and more. It has 4MB of RAM and 16MB flash for storage, and an assortment of I/Os for whatever you want. The full spec list is here. 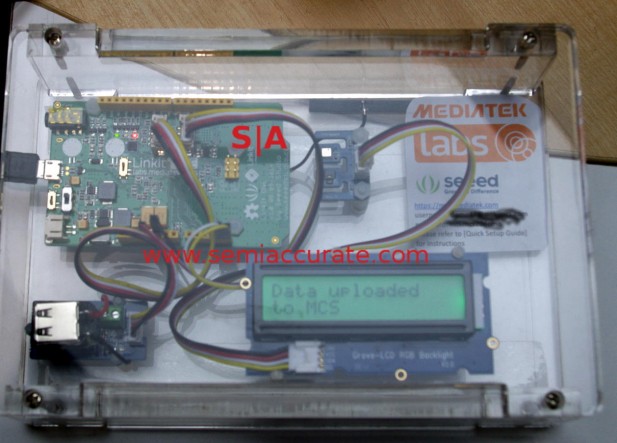 Logins blurred to protect the developers

The development board above from Seeed costs $79, not bad for the power and connectivity it offers. As a companion device the Connect 7681 is basically a Wi-Fi radio connected to a bunch of I/Os and sensors for a mere $19. At MWC it was used as a remote node for a ONE, and via the awesome power of radio, you could not only turn a light on and off, you could change its color too! Teh Intarnetz be majic! Seriously though the LinkIt ONE and 7681 are a decently powerful and well connected set of development tools for a pretty good price.

Now think back to the CrossMount API above, wouldn’t that tie in nicely with the LinkIt boards? The only thing missing is a cloud API, which brings us to Mediatek’s last outing of the day called Cloud Sandbox. This one offers services and support for tying in lots of devices and profiles to cloud services, think mass data mining for light color choices and other things useful to society.

In the end Mediatek is trying to show that they aren’t just offering SoCs, they now have the software support, device tie-ins, and everything else you need to make a complete Mediatek based ecosystem. While we aren’t ready to say they do it all yet, it does look like the company gets the big picture and is putting the parts in place to get it all done. Like CrossMount, keep an eye on how this progresses.S|A