MWC 2015: Getting closer to one cable every day

SemiAccurate spotted something interesting on the VESA booth at MWC, a working USB-C Alt Mode system. It may not look like much but there is a lot of engineering that went in to the product on either side of that cable.

You might recall during our earlier story about USB-C we told you about the so called Alt Mode where one of the two high-speed lanes in a USB-C cable is used for one of several other protocols. In this case it is used for Displayport signaling but also carries a full USB-3 signal on the other set of cables. On the surface it doesn’t look like much, see? 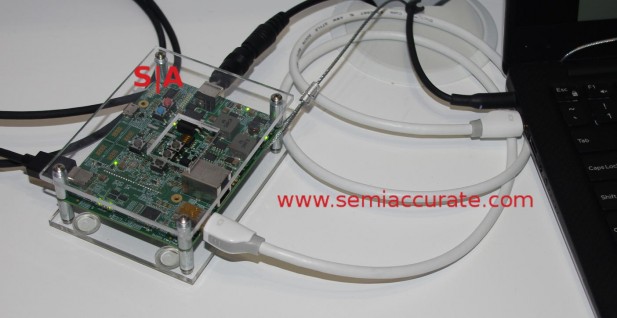 Look carefully at the ends

There have been several USB-C Alt Mode cables shown off over the past few months but this is the first time we can recall actually seeing one up and running that uses both USB-3 signaling and Alt Mode. There is a lot of power, PD functionality, firmware, and bugs which needed to be worked through to get to this point but luckily we are there now. Not much more to say than, “I want one yesterday”.S|A