The first one is called Touchbar Lite and it is of course a variant of their Touchbar concept. As the name might suggest, the Touchbar is effectively a spacebar with a touchpad on it so you can do gestures, swipes, and other similar features as well as making spaces. Once you play with the concept, its uses are pretty clear. You may have figured out by now that the Touchbar Lite adds lights to the Touchbar, and it looks like this. 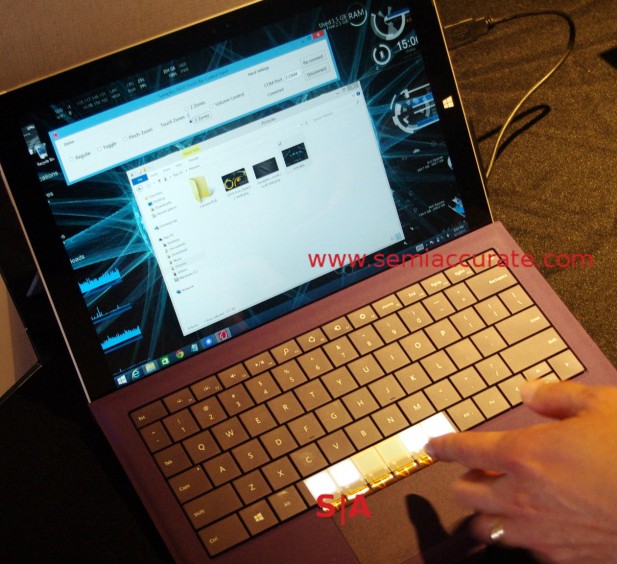 The really interesting part of the tech is the underlying integration, the fact that it can visually show off zones, presses, and offer other feedback isn’t all that impressive technically speaking. How they pulled it off is. The lighted buttons are OLEDs so they don’t need massive supply voltages. In fact the voltages supplied by the Synaptics controller are more than enough to power the OLED displays. All you need to pull off the Touchbar Lite is the same silicon as the Touchbar.

Six zones aren’t all that impressive though, but you can probably figure out that they are not going to stop here. Once you put more channels in and get things granular, the possibilities are almost endless. A display on a spacebar could be very cool.

Related to this is a concept Synaptics calls Izoard, it looks like a mouse with a clear top and buttons. Izoard is meant to show off two things, curved surfaces and how the Touchbar Lite can be used in other form factors. It is simply a bunch of buttons on a curved surface that you can press to open apps and it lights up to give feedback. Same tech as the Touchbar but in a different form factor. Once again it could be useful.

The last concept is called Redoute and it is a contactless USB3 transfer mechanism. Synaptics partnered with Keyssa and CMR Polymagnets to pull it off. Synaptics provides the touchpad and controller, Keyssa adds their Kiss short range 60GHz wireless transfer tech, and CMR has magnets for fine positioning.

Redoute allows you to make a contactless USB3 link at about 5mm distance. You take your contactless ‘USB’ card and put it on the touchpad, the magnets make sure things are aligned, and then the data goes over the Keyssa link. No contact, no plugging in, and it should be fairly seamless. This is a long way off from production but a high-speed contactless transfer mechanism has a lot of impressive uses.

With luck useful concepts turn into products eventually and Synaptics is not immune to this progression. The Touchbar concept that has been so long in coming is now finally here thanks to Thermaltake. The upcoming TT Poseidon Z Touch keyboard has a Smartbar so it offers multiple gestures, multiple zone support, and programmable macros. The best part is that the cool Touchbar concept is finally real and should be up for sale in a few weeks.

If you want a partner for the Poseidon Z keyboard, why not get a TT mouse with the Synaptics Natural ID fingerprint sensor. It put the sensor under where your thumb normally goes so you just pick up your mouse and the computer unlocks, or doesn’t unlock if you are not you. When you let go, you can set things to just log you out. It is a much cleaner system than the normal fingerprint swipe, and like Touchbars, it is finally here as a product.S|A