Last week at Siggraph Qualcomm outed a few details about the Adreno 530 graphics in its upcoming SoCs. You will initially see this family in both the Snapdragon 820 and 618/620 lines plus a few more designs as time goes on.

If you are in the mood for a technical look at this new GPU family, it comes in Adreno 530 and 510 forms, you are going to be disappointed. If you are looking for some info on the new image processors and display engines, there is a little more to be had there. Unfortunately the tech disclosed is on par with the preceding Adreno 4xx, that is to say very little.

Normally we would show you a chip shot of the Snapdragon 820 die with the various blocks all called out. Qualcomm provided such a diagram but the blocks were not correct or even to scale so it really only listed the various components of the chip with a cute background. Instead of reproducing that below, let me present a picture of my cats Dug and Thermos, it is much more informative. 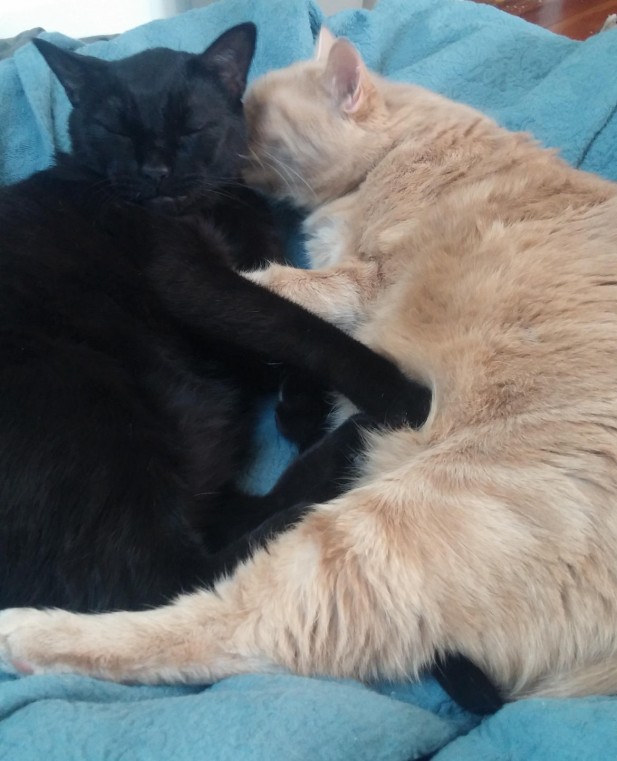 These cats are to scale but not labelled

Seriously though there was some information given out about the new GPU family starting out with 40% lower power or 40% higher performance than the outgoing 4xx line. While the press release uses “and”, during our briefing it was directly stated that the 5xx line was 40% more power efficient at the same workloads. That means “or” is more appropriate than “and” in this case. That said such an improvement, from both from architecture and process, is a fairly impressive feat.

For new features there are a few nuggets starting with the GPU getting snoop access to the CPU cache. This will enable a lot of GPGPU functions in the same way as HSA does for AMD’s APUs. To what level this goes, if there is full preëmption, and all those details were not given out but we expect they are all there by now. The new GPU architecture does have native support for 64-bit memory spaces as you would expect from something attached to a 64-bit CPU.

Speaking of preëmption there is some on the GPU side but we are just not sure what can be preëmpted or any caveats there. This GPU preëmption comes under the heading of enhancements for VR, something Qualcomm put a lot of effort into for the 5xx series. Other bits added to this generation are lower latency interrupts and foveated rendering. If you don’t know why those are relevant to VR, lets just say they make things smoother and better quality respectively, without the details on what exactly was done much more speculation isn’t very productive.

Moving on to the ISP the big news there is it is now branded Spectra and there are two ISPs on the 820. Between them they will support three cameras, two or stereo in back and one in front, 25MP total for the lot. This should be enough for most devices released during the life of the Snapdragon 820, the physics of the lens prevents much more resolution. Single sensors of up to 14MP are directly supported, see the physics bit for why that number isn’t bigger.

That too brings up an interesting point, the new 1 micron sensors have a little bit of a problem with pixel size. The problem in a nutshell is that visible light starts out at a wavelength of about .74 micron, pretty close to the pixel size. Those pesky physics we mentioned earlier mean you get all sorts of second order effects when the two sizes get close to each other and the ISP has to deal with the fallout. To lessen this problem, Qualcomm put in hardware de-mosaicing and other forms of noise reduction, color artifacting, and related things that make a picture look bad.

All of this takes some serious compute capacity and the ISP does have that however the DSP in the Snapdragon chips is much better suited to that kind of work. In order to better utilize the hardware at hand, Qualcomm built-in a path from the image sensor directly to the DSP cache before it gets to the ISP itself. This allows low-level processing of the raw image data for ‘cleaning it up’ before it gets to the ISP. Instead of a noisy artifact laden image to clean up before doing its normal work, the ISP now gets a pre-vetted data stream with very low added latency. This kind of shortcutting and using hardware best suited to the task not only makes a better image but it, in theory anyway, should save power too. Once nice thing about the way Qualcomm implemented this path is that metadata like depth is preserved along the way automagically.

On the physical hardware side of things there is now support for all sorts of auto-focus technologies. In addition to the normal contrast based focusing that mostly works on current phones, the 5xx line supports phase and laser based methods plus a mixture of technologies. As an added bonus you can now use a depth map to ‘refocus’ images through computational photography utilizing the DSP. Similar pathways allow for adaptive lighting adjustments for photos and videos, isn’t pre- and post-processing wonderful?

With all of these paths to and from the major compute blocks in the 820 you can do some other related tricks. One is using the sensor -> DSP -> ISP path as a streaming interface to do zig-zag HDR images without resolution loss. Better yet these tricks are just the official ones that are available at launch, OEMs will no doubt roll a few more interesting ones now that the interfaces are available.

Last up is the final piece, the display engine. It too has been updated with HDMI2.0 for 4K60 output or 4K30 via the wireless interface. It now supports DSC1.1 color compression so all the major graphics related units can save bandwidth and power shuffling data around start to finish. For those into graphics standards, REC.2020 color support is now in hardware, yay wide gamuts.

So what does the Adreno 530 and Spectra bring the buyer of a Snapdragon 820? Better efficiency or higher peak performance as one would expect on the graphics side to start with. That seems to pale a bit compared to the new imaging enhancements this time around though. Given how a modern SoC is used by most people, Qualcomm seems to have put the bulk of its design efforts in the right place.S|A