Dacuda was showing off two different types of scanners, 2D and 3D, but both use similar tech. If you look under the hood, there are more similarities than differences.

Dacuda was showing SemiAccurate their wares recently and two of them stuck out. The first is a 3D scanner using a camera phone called 3DAround, the other is a portable scanner called Pocketscan. Both of them could be quite useful in the real world.

The most impressive demo was for the 3DAround software, it turns your phone into a 3D scanner. It is officially aimed at food because, well, people like to upload pics of their food to the net for some reason. No we can’t explain it either but there are several multi-billion dollar valuation companies that cater to this premise. 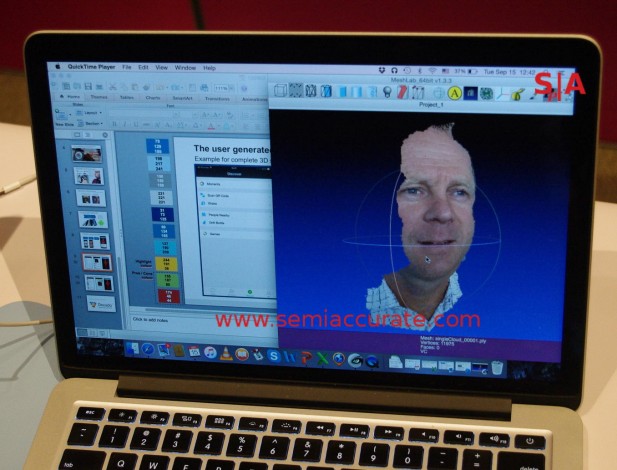 The result of a 3DAround scan

You take your phone with a 2D camera and move it around the target, be it a face or a McMeatish Deluxe. As you wave your phone around, it constructs a pretty good 3D image of the target object. More interesting is that since there is no standard way to pass 3D images around so the software will convert it to an animated picture or movie for uploading. Some places will allow you to click-through to the 3D version directly, other places make it a more manual process. Since the software is iToy only, we can’t really tell you how well it works. If you have one of said fruity devices, it is a free download so give it a shot. 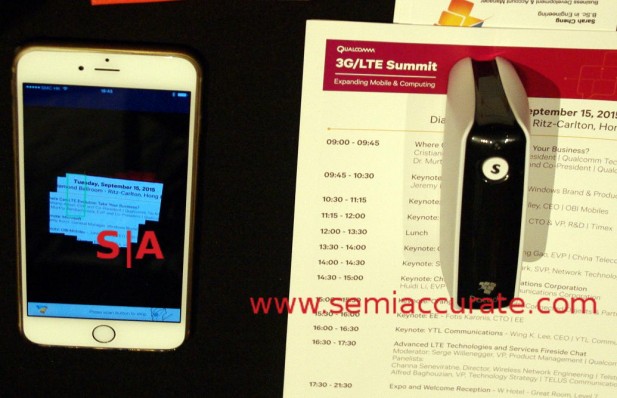 Pocketscan is a useful little device

More useful to non-teenage girls is the Pocketscan, a pocket-sized bluetooth wireless handheld scanner. You slide it over your document, orientation doesn’t matter, and it reconstructs the image on your phone. That is the important part, the scanner works directly with an Android/iOS phone. It will scan at 400DPI, do some OCR and table recognition, and other related items. I should probably carry one of these around in my bag, it would be used.

The interesting bit about these two products is not that they both come from the same company, both scan, and are only 1D apart in function. What caught our attention is the level of computational photography/imaging involved with these systems. 3DAround is pretty obvious, it reconstructs a 3D image from multiple 2D images in the usual ways, most likely deltas between frames to infer occluding. There is a lot of number crunching needed here even if the algorithms are somewhat widely understood.

Pocketscan does similar tricks because it has to in order to function like a user wants it to. Instead of a normal scanner that reads a page in a set fashion by moving down one axis, it allows you to wiggle the device around until you get bored. You don’t have to move it in a straight line like the old days either, you can go nuts and rotate the scanner arbitrarily if you want, Dacuda did when they showed it to us.

So that is the interesting part, both use heavy computational imaging and both can work directly on your phone. There is no need to upload the raw data to a powerful PC for processing with all the associated transfer annoyances and latency, it now works fully in your hand. Better yet both are fast enough to be useful even with the ‘limited’ CPU power of a modern device. This is where things are headed in the future and Dacuda’s wares are a taste of that now.S|A