If you need anything from 2-36 ports, Intel can help

Intel is launching two new Ethernet products today, the dual 10GbE X550 and the massive FM10000 family. SemiAccurate thinks one of these is conventional, the other is a potential game changer, any guesses which is which?

The conventional part is of course the X550 dual 10GbE controller, their second generation product. If you need to add a couple of 10GbE ports to your new Xeon-D box, the X550 is a good bet. It supports all of the virtualization, packet passing, QoS, VXLAN, FCoE, and iSCSI standards like you would expect. Since it is from Intel compatibility should not be a major issue, plus it should work with all the Intel networking SDKs like the DPDK and SPDK out of the box. That said it is hardly the stuff of enthusiast dreams.

FM10000 on the other hand is the stuff of enthusiast dreams, as long as you are a datacenter enthusiast, gamers won’t think too much of this one. If you take 32 lanes of PCIe3 in and 9x 100GbE out, you have quite the little networking setup in one chip. Raw speed on this level is becoming more commonplace but what makes the FM10000 interesting is its flexibility. 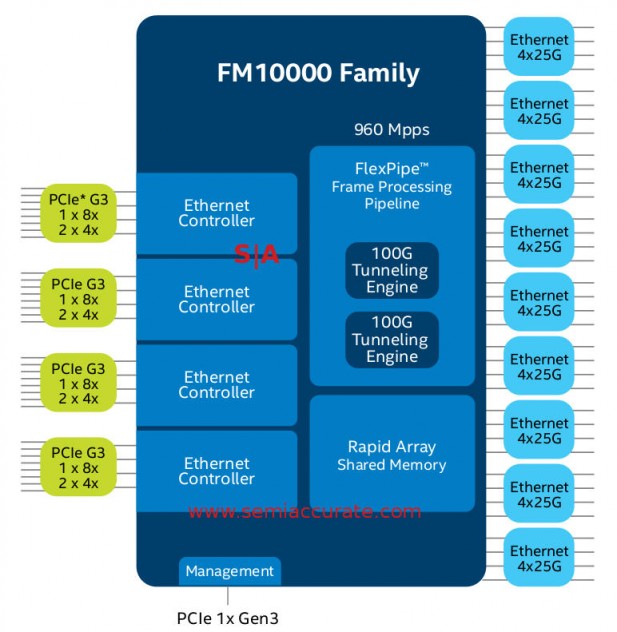 We know the numbers don’t add up cleanly, some configurations are controller limited, some are bandwidth limited so buy two if you need more. There are three members of the FM10000 family, starting with the Ethernet only FM10064. This has no PCIe3 data ports but has a total of 9 100GbE ports, the count for the lesser speed ports oddly remains the same. The mid-range FM10840 is the beast described above while the FM10420 is about half of that. It has two PCIe3 root ports supporting 2 8x lanes or 4 4x lanes and up to two 40GbE or 100Gbe ports. It is the home user version of the FM10840.

There are some more interesting bits with the FM10000 starting with a claimed 1000ns PCIe host-network latency and 300ns Ethernet latency at 100Gbps speeds, both pretty solid. This is all the more impressive because there is a packet tweaking engine on the device with 4MB of shared memory, QoS, NAT, and many tunneling features. There are of course full TCP/IP offload engines and all sorts of segmentation related features built-in too. In short it isn’t a dumb pipe, it does a lot of work on top of being a very fast pipe.