What the designers give, messaging takes

Intel’s “new” 8th Gen CPUs are a stopgap OEM placation to cover for a failed process, but they do bring some advances. As SemiAccurate sees it, Intel took .023 steps forward with the hardware and their messaging took three steps back.

Lets start out with the good, we have six new SKUs, two of each i3, i5, and i7. We told you about the i5 and i7 models over a month ago in more detail than Intel did, but we were off $8 on the price of the i5-8400, sorry about that. The official spec list looks like this, refer to our older article for turbo clocks.

Six SKUs, some with six cores

The step forward is that the i5 and i7 models now move to six cores from four. But the CPUs are otherwise unchanged, no new features in the CPU as far as we can tell but there appear to be a few minor ones in the chipset. For the financial folk reading this, think about the margin hit here, going from 4C to 6C and dropping prices as a result of AMD’s Ryzen CPUs, all on the 14nm process. We went into detail about that here.

According to the old roadmaps, Intel was supposed to be pushing out 8C 10nm Cannonlake CPUs about now. Actually about a year ago depending on which official, “nothing is wrong with our 10nm process” speech you listen to.

Back to the news at hand, these ‘new’ chips are incompatible with the old 2xx series chipsets and require the new 3xx series to work. SemiAccurate strongly suspects this is because the 1xx and 2xx chipsets and related power infrastructure were designed for 4C CPUs, they can’t supply the voltage for 6+ cores. We asked Intel about this but did not get an answer back in time for publication.

For the chipset, Intel adds per-core overclocking via an offset ratio, and ups the max memory clock to DDR4/8400. Better yet there are no-reboot ‘real-time’ memory latency controls so you can back off timings before you jack the clocks up. Coupled with more uncore overclocking features, you get a nice new set of tools for the bleeding edge LN2 crowd. On the down side the K-SKU cost adder is now ~$50.

On the GPU front we still have the same old Intel graphics, specifically the 630. Intel didn’t answer the questions about how many shaders the part have, but who really cares, they don’t work right anyway. Any sane individual is going to add a GPU to their PC, especially if you take Intel seriously about these parts being, “Intel’s BEST (their semi-presidential caps) gaming desktop ever”. We won’t ask how that lines up against the i9/Sky-X line, both claims can’t be right. If Coffee Lake is the best, why would you spend $339-999, much less $1999, on a Sky-X again?

That brings us to the first problem, a big step backward. Intel of late has been a little less than honest with their messaging. SemiAccurate had hoped the company would clean up their act but instead this briefing takes a turn for the worse, and this time it is indisputably intentional. What are we talking about? The first example is slide 9, the gaming slide with the quote above. Take a look. 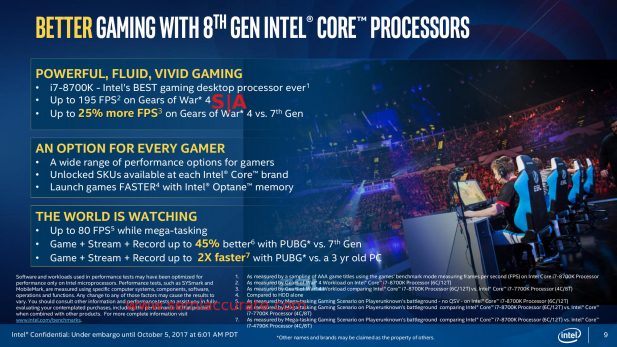 Another slide about gaming

Now check out the top set of bullet points we cut out below.

It is pretty straightforward in it’s claims, right? “Up to 195 FPS on Gears of War 4” is a pretty impressive number! Intel must have fixed their GPU problems, the anemic shaders of the past wouldn’t get within a fraction of that. Looking at the fine print at the bottom, and enlarged below, the box above covers footnotes 1, 2, 3, and *. Read them carefully.

The fine print, or at least some of it

Wow, an Intel GPU scoring that high is really impressive! Unless you look at the Configurations on slide 16. The system in question for the above test has an Nvidia GTX 1080Ti in it along with an Intel SSD, and it lacked the Xpoint/Optane drive mentioned in the second box of slide 9 for some reason. I guess that explains the 195FPS on GoW4 quite nicely. Here is the full Configurations page. 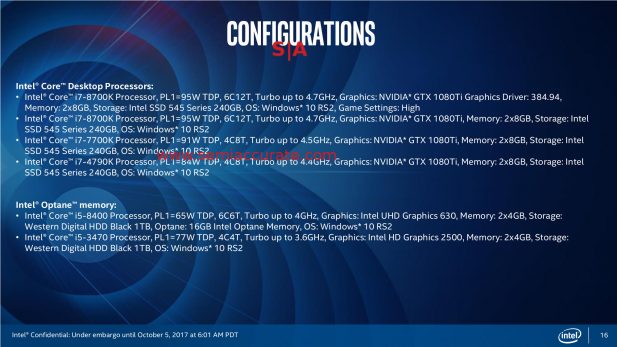 Now why do we say this is dishonest, and more to the point, intentionally dishonest? The configurations were not referenced anywhere on the slides in question as Intel has done for the past 20+ years this author has been following the company. During the briefing they did not mention the GTX 1080Ti anywhere, the slides and the call intentionally left this ‘minor’ fact out. This isn’t an accident, it is designed to mislead the press who either don’t check the details or are too well paid off to question it. Intel should be ashamed of behavior like this. 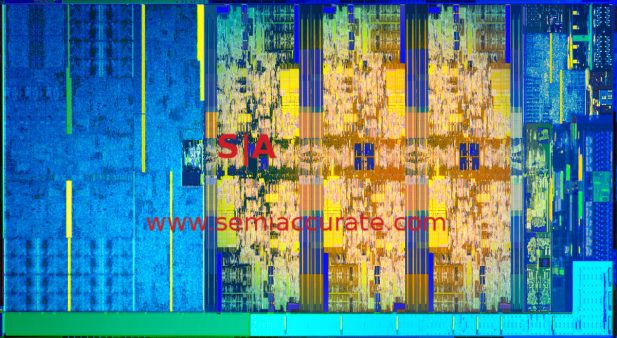 The die in question

Same for the “14++” process, Intel dodged all the questions on it. Short story it is the second PDK update forced by the 10nm process problems. This PDK update and relayout plus bug fix process has been going on since at least the Pentium days, it isn’t new at all. Actually the naming and public drum beating is new, but this is more of a symptom of Intel losing the process lead to Samsung and TSMC. They don’t answer questions because if they do, the charade of a ‘new’ process step will be seen for what it really is, IE not much. 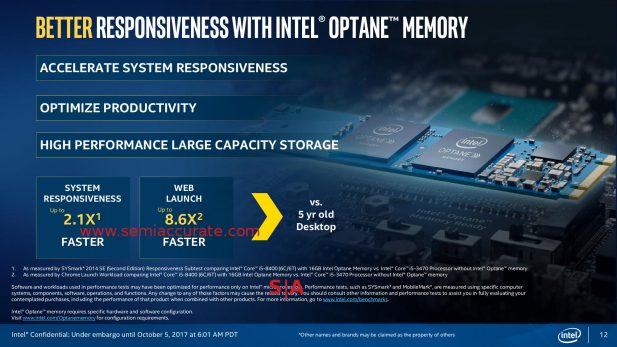 If process is the second step backward, Xpoint/Optane is the third. Again the company is intentionally misleading the press in the briefings and the slides. Why? Look at the slide above and the claims made. Like the gaming slide which ‘overlooks’ the Nvidia GTX 1080Ti but adds an SSD, this slide ‘accidentally omits’ the fact that the systems in question are HDD, IE spinning magnetic disk, based. For that you have to look at the configurations page which is, again, not referenced anywhere on the slide. This is not an accident, it is meant to mislead.

In the end what do we have? A PDK update with two added cores at a lower price. For users this is a good thing, for Intel stockholders, well you might want to ask a few questions about margins. All in all, two more cores for less money is a net win for the customer even it it was forced by AMD. On the messaging side, things are bordering on unacceptable. Not the hiding of Intel’s strengths, that is just dumb, but the claims they make that aren’t actually real. If the public is paying attention they will see a company toeing the line while moving in the wrong direction. .023(hardware) – 3(messaging) = -2.977.S|A