Updated Nov. 15, 2017 @ 11:45am: Qualcomm informed us that the demos were Cat9 vs Cat16, not Cat6 vs Cat12 as we originally reported. This has been corrected throughout the article.

The basic problem is that efficiency is very hard for people to understand, they just don’t get it. For example which is more efficient, a hybrid road car, a dump truck, or an F1 car which get approximately 50MPG, 1MPG, and 5MPG respectively? If you picked any of the three, you don’t understand efficiency, the correct answer needs to have a measure of work involved. A dumptruck is the most efficient way to move 8 ton boulders, a hybrid road car is the most efficient way to move people, and an F1 car has the highest thermal efficiency period. If you try to explain this to most non-engineering types, you get a blank stare followed by confusion.

Step forward to LTE, something that most people don’t understand. No we are not going to harp on the idiotic naming conventions, LTE, LTE Pro, LTE+, LTE Advanced, LTE Advanced Pro, Advanced Pro+, Super-LTE, Super-Duper-LTE, and Really Nifty LTE, all of which seem to map to nothing real at all. That is just stupid, the underlying tech as noticed by the Catx names really does have benefits to both the user and the carriers.

Users see obviously faster speeds but with antenna diversity they get better signal even if the higher categories are not lit up in their particular area. It is a win/win for those with a handset when the carrier ups the Cat level in their area. Similarly the carriers win because of efficiency. Higher Cats are much more efficient in their use of spectrum so a carrier can get much better throughput and/or support more users with the same scarce bandwidth in an area. It is a win/win for them too.

But how do you inform users, even technical users, about this benefit. Sure you can dive into frame lengths and header sizes versus packet payloads, signaling efficiencies, modulation schemes, and all the rest, but I am pretty sure you will lose most of the unwashed masses long before they get it. How do you educate the public about why higher Cats are a win for everyone, even if they are on an older phone?

To be honest we couldn’t think of an easy way to show it, we understood the math and tech just fine, but the simplification was a really tough task. That is where the following Qualcomm demo they showed last week came in, it explained the efficiency angle quite well. 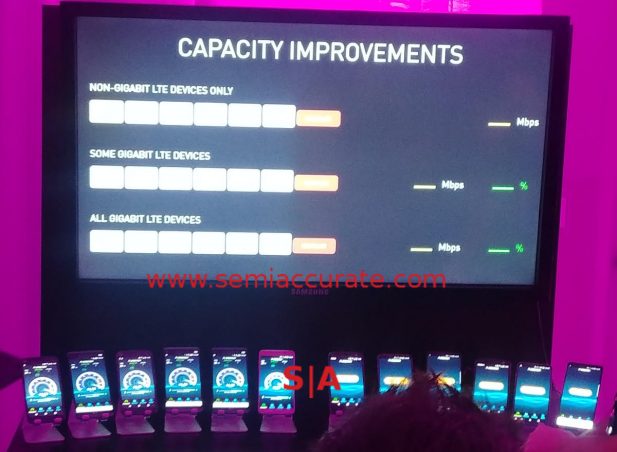 The demo starts with an LTE base station/picocell capable of a bit over 800Mbps (827Mbps from memory), all using public frequencies. This could be done on public airwaves just as well but getting an entire live cell to yourself to test is a bit tricker than an indoor picocell, but we are confident both would show the same result. The TV is just to tabulate results so you don’t have to squint and see the phones, write down results, and average them yourself.

For the phones, the left six are all off the shelf standard Cat9 devices, the right six are similar production Cat16 phones. The TV on top shows the results with the speeds seen by each phone in the white boxes, the total bandwidth available on the right is just the left six boxes added up. The bottom two rows also have a figure that is the percentage of the first line, IE total bandwidth available on line 2/line 1 total, and same for line 3.

The first line is going to be all six Cat9 phones running a simultaneous speed test. Since the six phones should be able to use much more bandwidth than is available from the cell, you should see both the maximum achievable bandwidth on the cell for Cat9 devices. The second test shown on line 2 is three Cat9 phones and three Cat16 phones, the last line has all six Cat16 phones going. If efficiency is equal for all LTE categories, then the net result should be more or less the same for each line. 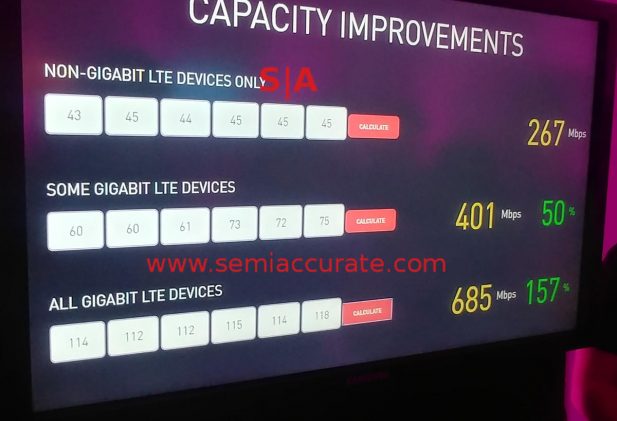 Efficiency in one easy picture

As you can see the all Cat9 test had a throughput of about 267Mbps or ~45Mbps per device, far below what you would expect from the 8xxMbps/6. What does this show? A group of Cat9 devices are relatively inefficient utilizing about 1/3rd the bandwidth available to a single Cat16 phone. From a user perspective this is just the way things are, you get a fraction of the bandwidth of a cell because there are other users, nothing new here. From an operator perspective this sucks, you are only able to sell about 1/3rd of what you could be selling if users are on a Cat9 device.

Now lets skip down to the last line, all Cat16 devices. They average about 115Mbps when using the same cell as the Cat9 devices they are sitting next to. This is a gain of more than 2.5x the throughput just by updating the devices used, the tower side was not changed at all. Think about that from a carrier perspective, 267% more data to sell or 267% faster throughput for users just by getting rid of all sub-Cat16 devices on your network. This is easier said than done, but you can see why carriers want you to upgrade your phones ASAP, you both win.

The really interesting story is when you mix three Cat9 device and three Cat16 devices. It should be mid-way between the two speeds, right? As you can see that is not the case, but things are significantly better than with all Cat9 modems, you get 50% more throughput on the same cells. If you ran the same tests with 1-5, 2-4, etc etc, you would see a progression of efficiency as you might expect. A single Cat16 device on a cell makes everyone faster, but each Cat16 device adds more than a simple average would lead you to expect.

But when you look closer at the data, if you moved a user from Cat9 to Cat 16, they would see an immediate benefit of ~30Mbps speed gain over their old Cat9 phone, assuming half the cell moved too. More importantly the troglodytes remaining on ancient Cat9 devices would see a speed gain too, roughly 15Mbps or ~33% higher speeds even though they did nothing. Why? Efficiency.

The higher categories use spectrum much more efficiently than the lower categories. Just like sleep states in PCs, they do the job faster then free up the frequencies for other devices. This means a carrier can put more users on a cell without bogging it down or just let user have greater speeds. For every user that upgrades their phone to a higher category modem, they win, the rest of the users win, and the carriers win.

This is why carriers want to upgrade to the latest LTE spec as soon as possible, efficiency. Sure they have to spend money but it isn’t so they can advertise peak speeds to users, it is so they have more to sell. Making more money makes carriers happy. A side effect is users get vastly higher speeds, and that makes them happy too. Happy users tend to mean more money for carriers as well. Everyone wins.

So now you get the efficiency angle of LTE. Higher categories use the available spectrum more efficiently than lower categories. The more a carrier can upgrade their user base, the better their network performs, and the better the user experience. That may be obvious, but the part almost nobody understood is that the experience gets better for users not upgrading too. That is efficiency.S|A