Last mile just got a big kick without cables

Lattice’s new GigaRay mmWave is a very interesting last mile and more play. It may not solve all the problems of connectivity but SemiAccurate thinks it can go a long way to solve a bunch of them.

GigaRay is a simple device, take a mmWave transmitter and receiver in the unlicensed 60GHz band and use it for last mile and point to point solutions. Because 60GHz is both unlicensed and is attenuated by oxygen, a tight beam is perfect for point to point hops. GigaRay promised 1Gbps of TCP/IP throughput over 200m distances, 300Mbps at 300m. How close is the nearest light pole to your house? Does it have enough room for one of these? 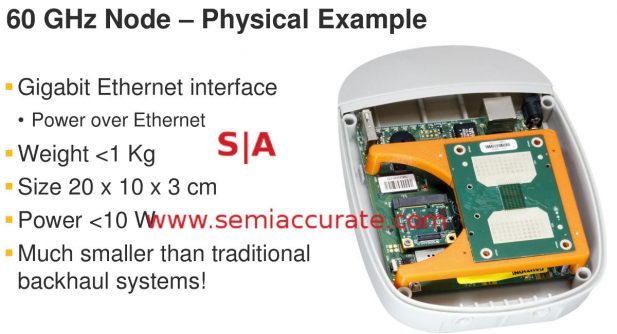 One big problem with such devices is that you need a fairly tight beam to keep speeds up and power draw down. Tight beams are aligned at 200m with a bit of work, nothing terrible. Keeping them aligned in wind, rain, or whatnot conditions is another matter altogether. Current solutions use mechanical alignment which is slow, heavy, (relatively) power intensive, and expensive (again comparatively).

That is one nice thing that Lattice’s GigaRay does away with mechanical alignment. The new solution uses electronic steering/beam forming to steer the beam up to 45 degrees off axis horizontally, the vertical angle is a fixed 10 degree spread. This solution is not only much faster than mechanical steering, but also means you can cover 360 degrees with only four modules. 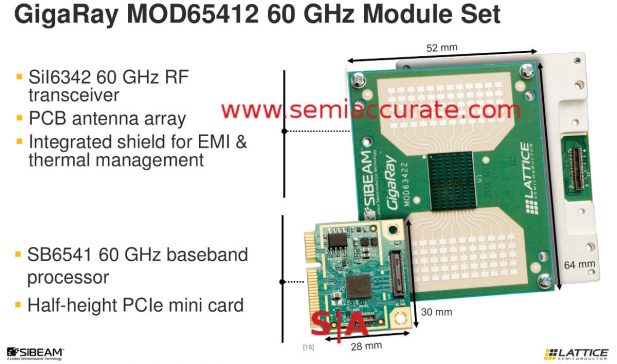 While we won’t get into the physics of beam forming here, GigaRay accomplishes this by using lots of antennas, clever bending of physics, and shielding. This is the long way of saying that a complex, expensive, mechanical solution is now doable in a pre-rolled module like the ones pictured above, all solid state. The first picture shows what can be done with ‘consumerizing’ the tech, is is readily adaptable to something an ISP would deploy in your house for internet service. But that isn’t the interesting part. 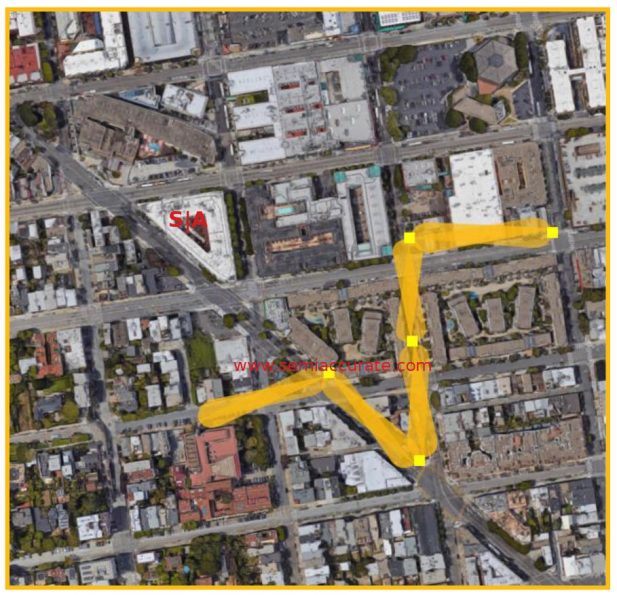 A better bet for initial deployment is the micro-/pico-cell arena. With the coming deployment of 5G in the mmWave bands, ~28 and ~56GHz, the need for tons of high capacity small cells will be at a premium. Putting small cells on light poles, in dense urban areas is not a big trick, a guy, a truck, a ladder, and a few cable clamps should do the job. Getting signal to those cells is a trick, especially in dense urban areas like the one pictured above.

With GigaRay or any similar point to point solution, you can go around corners, make meshes, and put high speed data into places were wiring is impossible or just not worth the cost. Some of the things, meshes for example, are the purview of layers higher than what Lattice offers, think of it as value add for OEMs. That said if the price is cheap enough, why wouldn’t an ISP spec out a box with two radios and make a mesh out of every block for uptime reasons? Hard wiring between houses makes that a non starter, a second GigaRay module may very well be an acceptable cost for an extra nine or two of uptime.

So in the end with GigaRay you get an antenna module, baseband processor, and a set of drivers that to Linux looks like Wi-Fi. That should ease development costs a bunch and allow for easy integration into tons of open source projects that already do much of what you want. From there the possibilities are endless.

SemiAccurate thinks you will see Lattice’s new chips in the telco side first as a bridge to smaller cells in hard to wire locations. 5G will make this type of cell densification mandatory and that isn’t far off. After that there is a strong possibility that your local ISPs will deploy GigaRay instead of the next cable replacement, the costs are much lower. In the end it doesn’t matter how the bandwidth gets to you as long as it gets to you. GigaRay is another significant chunk in making that step toward you.S|A