Intel is introducing a new line of 7-Series SSDs starting with the consumer oriented 760p. The claims of 2x the speed with half the power use are something SemiAccurate thinks are quire achievable.

Before you point out that these drives aren’t going to set the world on fire, they aren’t really meant to, they are just workaday drives with solid specs. There are three drives introduced today, the consumer 760p, the enterprise 7600p, and the embedded E 6100p. Unfortunately other than the name, these latter two are not going to be outed until later in the quarter. 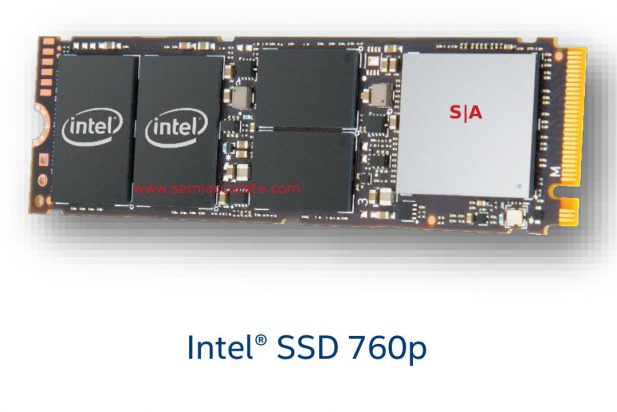 Nothing ‘shopped about this pic

There are precious few differences between the 760p and 7600p, basically the business line doesn’t have encryption and manageability features fused off, and likely has a lot more overprovisioning. The E 6100p is also the same controller and flash as the other two but named for endurance rating according to Intel. In a very nice change, Intel specced their 760p in a novel way, with claimed 72TBW per 128GB of capacity. Not only is this smart but it nicely coveys the markets for the device, that means 576 drive writes with a 5-year warranty.

If you keep the drive for the full 5-years, you are looking at ~.4DWPD. For this class of device it isn’t a bad number but given heavy PC usage by the types of financial and engineering types, you might want a bit more than that. Unless you are going for raw cost or buying a PC for your parents, hold off for the 7600p, or at least wait for the specs to be released. Since we mentioned specs, here are the ones for the 760p. 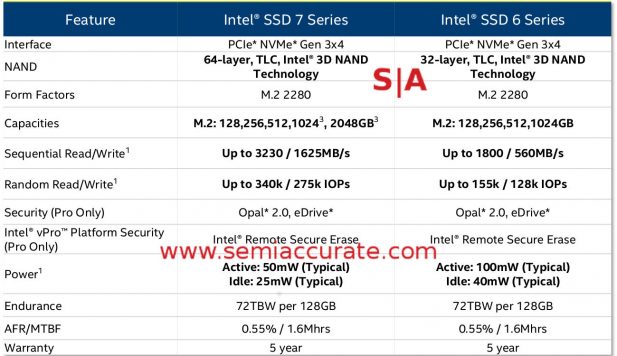 The table of the spec multiples

Those 2x and .5x claims mentioned earlier are against the 6-Series drives as you can plainly see. The new controller in the 7-Series is called the SM2262, and it has a fully new architecture, firmware, and of course new 64-layer 3D TLC NAND. The Gen 3×4 interface doesn’t have the last bit of bandwidth squeezed out of it by the 760p’s 3230MBps sequential write rating but that should be more than snappy enough, especially compared to the SATA drive most users will be upgrading from.

These new drives will be out in 128/256/512GB sizes as you read this for $74/109/199 respectively. Later on in the quarter Intel will release a 1TB and 2TB version, the last one being double sided, for undisclosed prices. Given the ~$40 per 128GB adder, you could figure out a price but given the volatility of the flash market, it is likely to be wrong. Just pay for them in Bitcoin and the flash volatility will look like a serene lake in a picturesque nature setting by comparison. 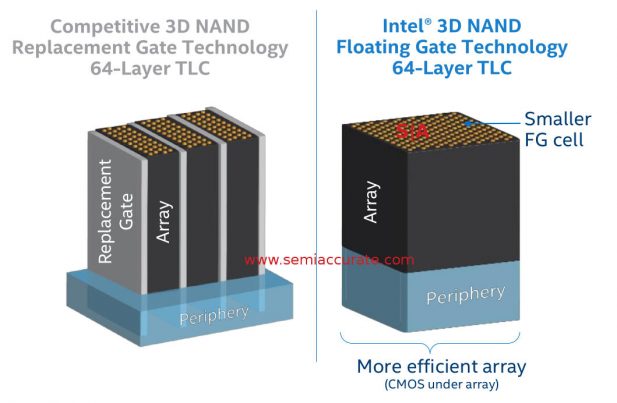 Much of the gains are coming from the new 64-layer NAND dies that Intel is now releasing. They are 32GB/256Gb devies which Intel claims are much denser, 20%, than competing 64-layer NAND devices. In semiconductors, density tends to equate rather directly to cost so Intel’s claims are probably safe. That said their claims of floating gate arrays vs competitors fixed gate bring in the spectre of added cost per mm^2 so, well, we have no idea if Intel’s flash is actually cheaper to manufacture.

One interesting tidbit is found in the small print of the slide we took the gate picture from, it says, “Comparing areal density of Intel measured data on 512Gb Intel® 3D NAND to representative competitors”. The 760p uses 256Gb dies, the 512Gb hasn’t been announced yet. Since the efficiency claim is based on the cell to periphery area, does that ratio change between the 256 and 512Gb dies? Undoubtedly. Does it dramatically effect things? We have no clue but we thought you might like to ponder that until Intel gives out technical details on both dies.

So in the end, what do we have? A decent drive with decent specs a decent price. It won’t set the world on fire, nor will it set your budget on fire. You can go higher and lower in all of the relevant metrics if you want, but the Intel 760p is aimed at the meat of the market. The one part that SemiAccurate found interesting was that Intel is claiming the 760p will be priced roughly the same as a SATA drive. Have we finally reached crossover for real? The sooner SATA dies and PCIe 3×4 replaces it, the better we will all be.S|A