Like we told you, 350W is not amenable to air

Coolit just confirmed SemiAccurate’s story that the Xeon-AP lines would be water cooled. About the only details left is the ~350W number and a few details about internal wiring.

On the up side if you are going to liquid cool a server, Coolit is a really good choice to make. In our earlier story about Cooper-AP, we said it would be a 350W 40-48 core CPU 3-die MCM force-bundled water cooling. We knew about Purley/Cascade-AP but we didn’t think Intel would be silly enough to put it out, they canceled Purley-AP for good reason. Do note it was publicly shown off at previous Supercomputing shows before it was knifed, at least in Purley form. 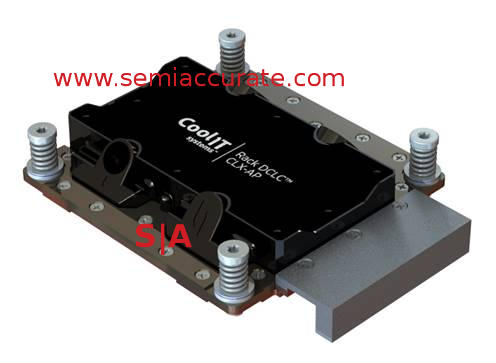 It is bigger than it looks

Now that the majority of the relevant data points have been confirmed there is only one real question outstanding, what is Intel going to do about the chaos their roadmap churn is causing in the OEM community? Adding new platforms in left and right, lack of guidance on critical transitions, and more don’t seem to be being addressed. Trickling out the answer to the question of what is fine and dandy, but how is more important to customers.S|A