Add one to the 9th Gen and there you have it

Last week Intel launched their ‘new’ 10-series desktop CPUs with little fanfare to match the little advances. This isn’t to say they are bad chips, they are quite solid, just that SemiAccurate finds it a stretch to call them evolutionary much less a new generation.

Lets start with the basics, these 10th generation parts are Skylake v5 with precious little added to the mix. The so called 14nm++ process is the same mid-life optimization that Intel has been using for decades now riding on a drum banging from the marketing side. To be fair to Intel though, they didn’t start this idiotic trend, that black mark goes to Samsung and TSMC in that order, but they are riding it hard. In short this ‘new’ 10th generation is the 6th generation parts with a few minor core updates and a little added to the uncore.

These updates are not anything worth upgrading for. Slightly better GPUs are obliterated by discrete parts, Ice Lake, and AMD. PCIe4 is still nowhere in the Intel lineup and don’t hold your breath for it landing any time soon. This story is being typed on a Broadwell laptop that quite simply does not make me yearn for an upgrade, for what I do the differences would not be noticeable.

Once again this doesn’t mean the 10th gen parts are bad, they just aren’t new. OEMs demand a new lineup yearly to make sure they have ‘new’ things to sell so they can tempt buyers with shiny bits. Intel, AMD, and Nvidia have to comply with their customer demands in order to sell their wares at non-deflating prices. This insane cycle leads to the 5th gen of Skylake that you see before you, 32 of them in fact. 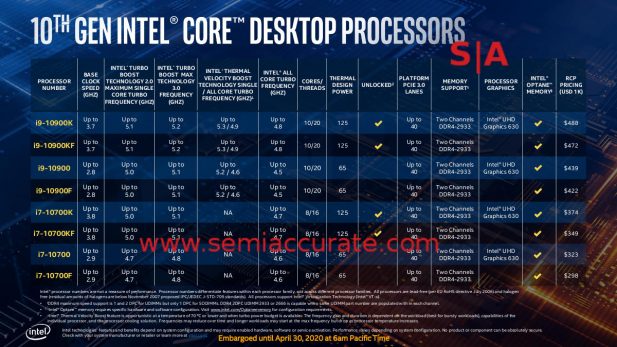 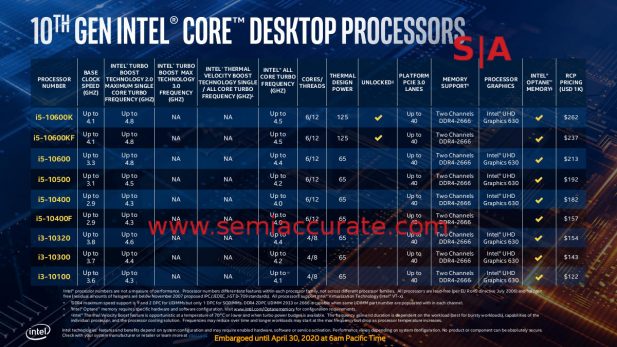 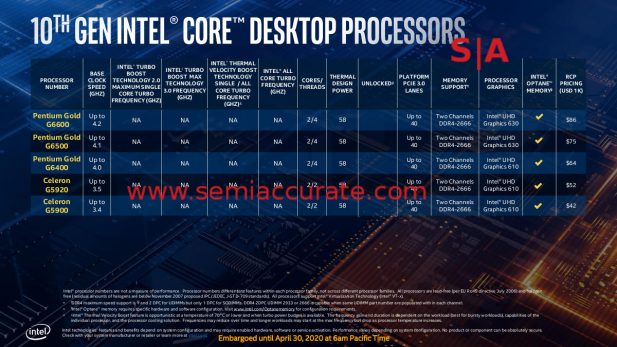 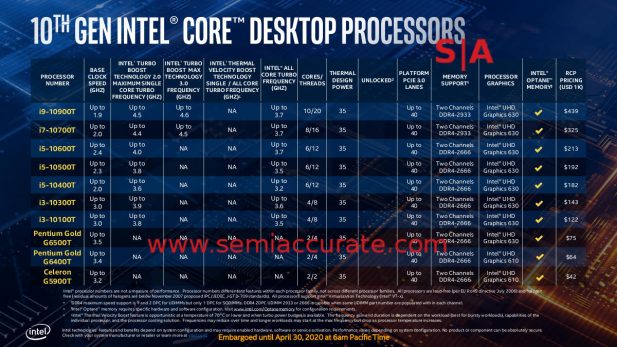 Too many on purpose

Intel’s big headline here is a claimed 5.3GHz for one core and 4.9GHz for all core turbo speeds. This is with their “thermal velocity boost”, basically a turbo mode that depends on an extremely low die temperature and a host of other factors which you are unlikely to ever see in practice for more than a second with mere human cooling rigs. With actual turbo, something that can be attained for a small number of seconds, you can get one core up to 5.1GHz, 4.8GHz on all cores.

This is about 100MHz more than the 9th gen parts which is why we are so ‘meh’ about this launch. Two more cores are borderline useless for consumer work and gaming but can be useful if you are doing workstation tasks and heavy compute. Then again if this is your forte and you have a corner case that benefits from core count, AMD can count to 16, Intel to 10 in this class of socket. Then there are the ‘new’ features. 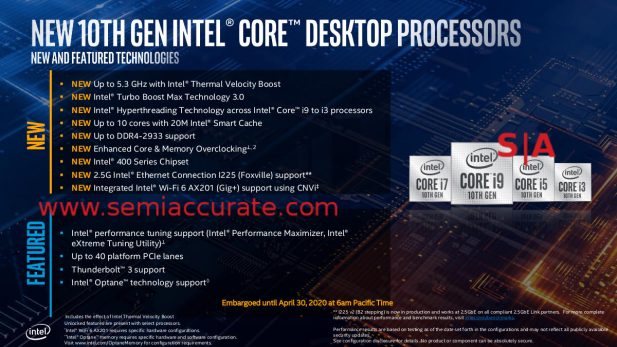 The first one we haven’t covered is the bit about HT on all cores from i9 to i3. This is one of the most disingenuous statements we have seen in a long time. Why? Intel artificially cripples their chips and then sells the ‘features’ back to users. They have done this with ISAs, cores, cache, memory, and HT among others. Now that AMD is eating their lunch in the consumer space, Intel is ‘adding’ this ‘new’ feature of not artificially crippling their chips. How egalitarian.

Bumping the memory speed up to DDR4-2933 is nice and again a response to AMD’s support of DDR4-3200. That said it is a good thing. We would get excited about the new overclocking features but they seem tied to a program that only runs on specific OSes so sane users are locked out. There are a few knobs that may be exposed in the BIOS but SemiAccurate doesn’t have a system to play with so, well, we will just assume they aren’t available. 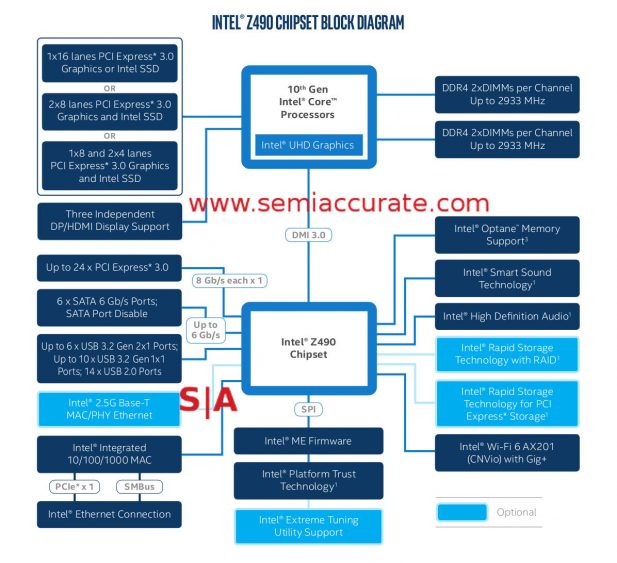 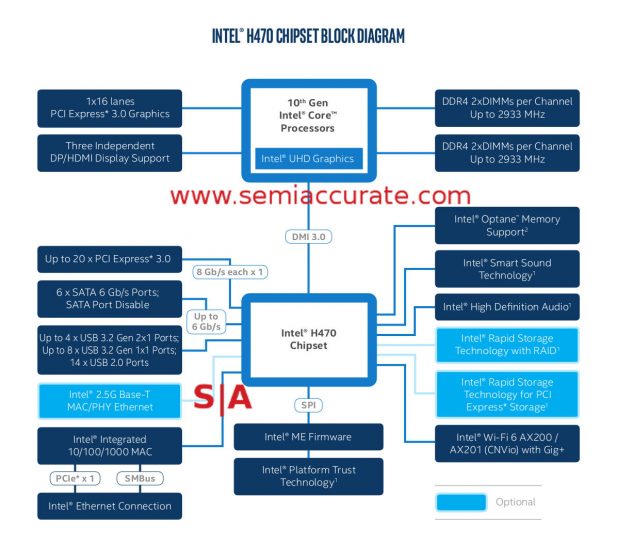 That brings us to the new chipsets, two of them called H470 and Z490, low and high end chipsets respectively. If you are wondering why Intel has to keep spinning new chipsets for each generation while AMD can keep one for 3-4 gen, the answer is simple, planning. AMD had a plan and kept to it. Intel is flying by the seat of their pants trying to survive a death by 1000 cuts product cycle brought on by 10nm delays. 14nm CPUs on consumer platforms were never meant to go above 4 cores so that is all the voltage supply could handle. When they went to 6C in a reactionary panic, they needed a new platform. Ditto for 8C and now we are at 10C.

On the bright side it gives Intel a really good excuse to add features, in this case 2.5GBe support and CNVio ports for Wi-Fi6. Other than that there isn’t much new because, well, anything with low enough latency to be interesting is on the CPU. There are a lot of numbers like 24 PCIe3 ports on the Z490 chipset, 6 USB3.2 Gen2 ports, and a lot more but those are all fed through a single DMI3 link which doesn’t have enough bandwidth to do the things you are expecting to do without bottlenecking. Still, it does have features, just stick with the 16 lanes of PCIe3 off the CPU for anything you need performance on. 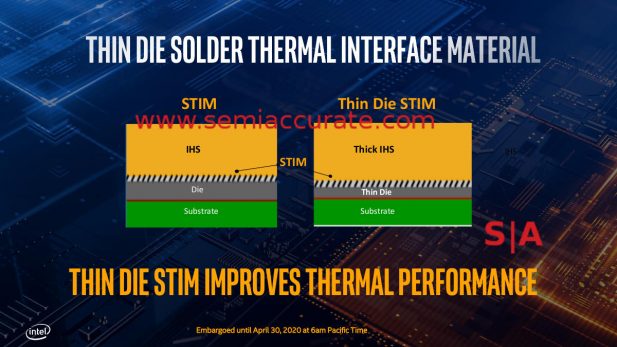 Take a little off the bottom, then flip

On the packaging side, Intel did something interesting with die thinning. As you can see above, Intel is thinning the die on the 10th gen parts a bit more than the previous ones and soldering the die to the IHS on some but not all new SKUs. Intel called out the i5-10400 and i5-10400F as potentially having both but it would probably be safe to assume any high end part uses solder while a few sporadic low end parts could use a TIM. To us this looks like it is a case of having a few die left over from previous models which haven’t worked their way through the sales cycle yet.

In any case this is a good thing. While the raw number of the thinning, ~.3mm, may not sound like much, it should be a big deal for serious overclockers. Why? Silicon is a really good insulator and the obvious heat path out of a die is down through the metal layers and out the pins. It is far less efficient to go through the silicon and out the top so every little bit more shaved off is a big benefit. Depending on what the dies were background to before, 30µm saved can be quite a substantial number, an unground wafer is only about 775µm to start with. If you aren’t familiar with potato chipping wafers, read this.

Last comes a bit of the minutia. We asked Intel for the PL1/PL2/Tau of the new CPUs along with the sidechannel mitigations. Here is what they said:

PL1/PL2/Tau – Our motherboard partners have optimized their respective board and BIOS settings for the 10th Gen Intel® Core™ desktop processors. However, for defaults:

About what you would expect, and that in a nutshell is a good way to sum up the 10th generation parts as a whole. The ‘new’ bits are pretty minor, just adding support for other Intel properties and new specs, plus a couple of additional cores. On the speed side the added silicon learning and maturing process allows Intel to cut margins a little and add a speed bin here and there, basically what you would expect. The only real surprises were the thinned die and the die shot, both really good things.S|A