What with matters more than what

Today Marvell is unveiling their new custom ASIC division and it has a lot of promise. Normally SemiAccurate doesn’t think much about announcements like this but Marvell’s offering is different.

In the dark ages before time, 1994 to be exact, IBM started a custom ASIC division and it was good. Then in 2015, someone walked in to a conference room, said something about ‘be light’, and turned on the lights. The resultant meeting meant GlobalFoundries acquired IBM’s ASIC team along with a few other bits like the foundry. Then in 2018 the GF ASIC division begat AveraSemi by the ancient and honorable tradition of spinning off. Marvell saw what GF had wrought, thought it was good, and bought it. Then a few days of rest brings us to today, Marvell has a new custom ASIC division, and it was good.

OK, enough of the story telling and on to the tech. What is a custom ASIC division? Just what it sounds like, if you need a chip, they will make it for you much like AMD’s semi-custom designs for consoles or Intel’s… well that one probably sank beneath the waves but you get the idea. You have a concept or need, they make it for you and hand you a chip or design with your name on it. This goes from layout to RTL to a turnkey solution, how much they to do is up to the customer.

This sounds good on paper but it gets expensive, and it is probably more expensive to have someone else roll your chip than you to do it yourself, after all, they need to profit too. So if Marvell’s ASIC arm is just a chip design team for hire, why are we so keen on it, and why do we think they have a really good offering for the market? Easy, IP, and lots of IP across a wide range of product segments and market types.

Better yet they aren’t tied to a single foundry like they were in the IBM or GF days. Although Marvell mainly works with TSMC on this front, they are also starting to do projects with other foundries as well, Samsung was mentioned a few times. Given that they are not owned by a fab or a company related to a single fab, any process is open to them should it make technical or business sense, and that puts them ahead of most of the other custom ASIC divisions from the start. 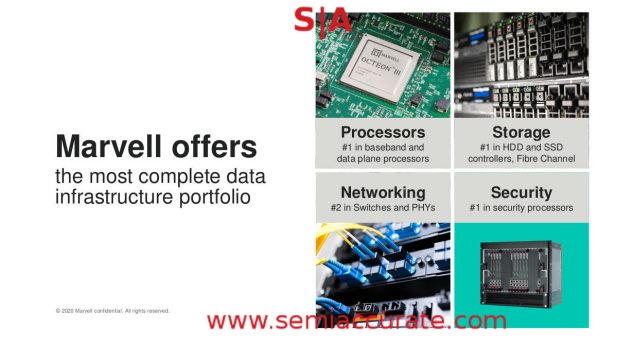 Marvell has a lot of IP

As useful as fab independence is, it is not the real reason Marvell has a good thing on it’s hands, IP is. Take a look at the range of Marvell IP, they are big in several major sectors, CPU, storage, networking, and security. Remember they bought Cavium a while back so they have a range of custom ARM cores as well as access to the official offerings. They are the leader in 5G ASICs right now so they have PHYs and SerDes too, and don’t forget QLogic. Security chips are part of the Marvell portfolio as well and the list goes on. You might not hear too much about the company directly but it is hard to buy a PC or device without something from them in the box.

A lot of verticals serviced too

Similarly they service a wide range of vertical markets for their devices, many of which have some very specific packaging needs along with specific versions of common protocols. Automotive has some very long life requirements, wide temp range needs, vibration control, critical security concerns, saftey ratings like ASIL-D, and uses protocols like automotive Ethernet (802.3bp). Military does all this but needs more, plus has some pretty strict confidentiality needs too. Much of this pales in comparison to some of the aerospace checklist, lifetime and safety take on new meanings there.

5G brings telecom protocols and bleeding edge PHYs to the table, plus a lot more. Datacenter and cloud are more along the lines of what you would expect but still have some odd bits here and there, smartNICs being a good example. Marvell services all of these markets and more, plus some pedestrian things like IOT and home automation, so top to bottom in many areas.

SemiAccurate isn’t gushing about Marvell for the sake of making them sound good, the point of this article is their custom ASIC arm, right? We went on and on about the markets and products for a reason, the breadth of the IP in both logic and packaging that Marvell supplies for their products is pretty huge. The custom ASIC arm has access to it all, something the ASIC wings of few companies they compete with can match. Don’t underestimate what this allows Marvell to do.

As you can see above, you can buy a Marvell chip off the shelf, have one spun with the bits you need from the Marvell library, or make one with Marvell bits and customer IP. On top of that, Marvell has access to external IP libraries like ARM’s CPUs and GPUs, Imagination, and the various PHYs and controllers from places like Synopsys. Most of the big chunks come from in house but Marvell sounds like they are amenable to anything a customer wants to include.

Then there is packaging, something Marvell does for sectors like automotive and aerospace. Telco and switching have some pretty impressive packaging needs too, and often use embedded memories which require interposers and other multi-chip technologies. So if you have a need that a current Marvell chip meets but you need high vibration tolerance and HBM for example, they can do that too. Custom isn’t necessarily confined to the die itself.

You probably will never see the products of this custom ASIC division on the market unless you know who their customers are. For obvious reasons the customers don’t want it known that a third party made their devices and Marvell doesn’t want to annoy the customers by pointing it out either. Things like a doorbell with an additional wireless link or a 5G basestation ASIC with a few more of something not disclosed are examples of the breed, and they are out there in volume.

Marvell is claiming that their custom ASIC team, including during their IBM, GF, and AveraSemi lives, has done over 2000 ASICs on 14 nodes. This isn’t a bad track record and it was all done before they had access to the portfolio of Marvell IP. More importantly the disparate teams in Marvell are talking to the other teams and the custom ASIC people to align interfaces, IP portability, and development where it makes sense. Much of this portability is already in place due to standard interfaces like ARM’s busses but there is a lot more to be done, and that is being done. In a year or two Marvell should have a vast array of easy to integrate offerings that few if any others can match.

So that is why SemiAccurate thinks Marvell’s custom ASIC arm is a really interesting play. They have a nearly unmatched IP and packaging portfolio that spans a wide range of markets from shoelace tip controllers to aerospace. Others have some parts of the puzzle but are usually tied to a foundry/process tech or a specific IP block like a CPU core. The only down side is that you know Marvell’s custom ASIC division is doing cool things but unless you are on the inside, chances are you will never know what those cool things are.S|A