A masterclass in sef-inflicted wounds

Intel can’t stop with the self-inflicted wounds on their ‘launch’ of Tiger Lake. SemiAccurate had a positive view of the CPU until the ‘launch’ itself, not any more.

Why is what Intel did so stupid? They finally have an adequate product that can mostly match what AMD has been delivering for six months or so. Sure the architecture is unchanged since Ice Lake, something the company is desperate to hide as you could see in their Architecture Day ‘disclosures’ on the subject, but that really isn’t a reason to hide things, it doesn’t actually suck. But hide and deflect they did, and it made themselves look stupid.

Moving on to the launch itself, Intel went out of their way to not allow questions. Why? Part of it is the non-new architecture and part of it is they only want to show off their rather skewed benchmarks, not get questions about what they are actually capable of. In the press, this is about the biggest red flag that something is wrong, and Intel went out of their way to wave it.

No pre-briefs and only a fluffy press release that doesn’t have release dates, prices, or the things that actually matter to users. The stream is full of contrived scenarios where Intel ‘wins’ because the ‘benchmarks’ are skewed to their ISAs. How much does AI matter to you on a desktop? Sure you can take every picture on your laptop and run it through AI all at once, and Intel will finish faster on software that they added their ISA support to. As yourself how often you do this. And how often you do this while live streaming something in the foreground. And… you get the idea.

So what is Intel actually launching today? Nothing. They are announcing the Tiger Lake line, sans prices, and more glaringly lacking ship dates. Why? Intel told analysts they were pulling in 10nm Tiger Lake which for some reason the financial community understood to mean production of, not PR events for. Today we get the Tiger Launch ‘early’ without any real information and without actual shipping products. This meets the legal definition of the term but if you are in the financial world, just realize how they cynically played you.

Back to the lack of questions, Intel’s stream is full of ‘wins’ for Tiger Lake over AMD’s Ryzen 4000 line. The reason Intel is so desperate to avoid questions is that they want their messages to come out. If you could read the fine print and read how skewed the tests were, and how they are not realistic, you might question their message.

Intel designed their launch to make sure the press couldn’t get that information in a relevant time frame. Some of the tests might not be skewed but independent leaks show Tiger Lake losing to AMD’s 4800U in most things. Intel’s lack of sampling to even the most tame press shows they don’t want independent numbers in the wild, can you blame them? Yes, see above and below.

So what is Intel actually launching? Once again, nothing. What are they announcing? 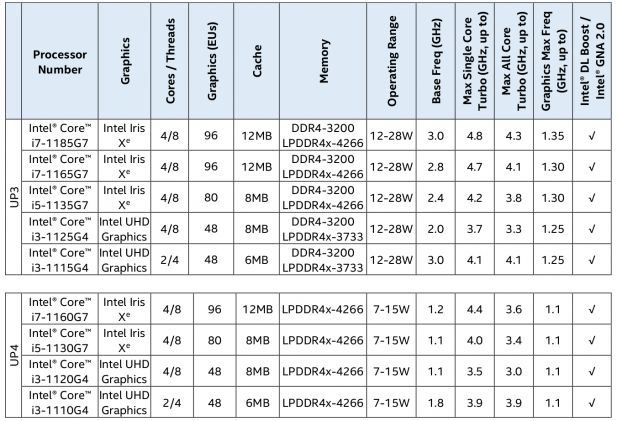 The best they gave

More to the point, Intel can’t actually supply Tiger Lake CPUs. SemiAccurate’s checks with OEMs all say they Intel is shorting them on supply by 7-digit numbers in several cases. If you are a glass half full person, you could say demand is high. If you are realistic, you can say that yields are still not viable on 10nm, and wafer starts are… the number is shockingly small. Because of this, well talk about DJs, how often people re-encode and run AI over their entire photo collection, and more ‘realistic’ use cases! Just don’t ask about ship dates, prices, yields, or the important bits, and really don’t ask about the specs on the ‘tests’ they presented.S|A