We actually aren’t sure due to their ‘launch’

Intel doesn’t know when to stop digging even when they have a product that will move the needle upwards. SemiAccurate is getting sick of these self-inflicted wounds, we would rather talk about the products and the tech which could be there but are buried.

Today Intel is launching, well we aren’t really sure. It is called a graphics briefing and that is the topic of the slide deck but this time around the products aren’t really called out. There is a crushing stream of buzzwords that are flat out not defined and a few vague graphs but that is about it. In the ~1 day between getting the materials and the embargo lift, SemiAccurate’s simple questions were not answered either.

About as close to a product as we can get is the slide entitled, “Introducing Intel Iris Xe Max Graphics” which appears to be about the discrete DG1/Tiger Lake external GPU. They slap in buzzwords like, “Intel Deep Link”, “Hyper Encode”, and “Dynamic Power Share” but nowhere are they actually defined. Instead you have to guess what these things are based on by the type of things they show elsewhere on the slide. As usual just ignore the buzzwords, life will really be better.

Lets step back a year or so to the days just before this discrete GPU was shown off for the first time at CES 2020. We had multiple sources from Intel tell us the GPU performance wasn’t there but the product was pretty good at video encode so that is what would be focused on at launch. Fair enough, and that is what we got today with five slides on that topic and only two on gaming performance. Play to your strengths. That said we would be interested in knowing what Intel does under the hood but since they won’t answer the basic questions, we won’t hold our breath for the real data.

So what is Intel actually launching today? As we mentioned earlier we aren’t exactly sure but it looks like there are two discrete GPUs, an Iris Xe and one with a Max tag. The two slides below show that both are substantially similar but the Max has a clock of 1.65GHz and 4Gb of external LPDDR4 versus the 1.35GHz and no memory of the non-max. That said neither of these products are named other than the vague, “Xe Microarchitecture” on the top. 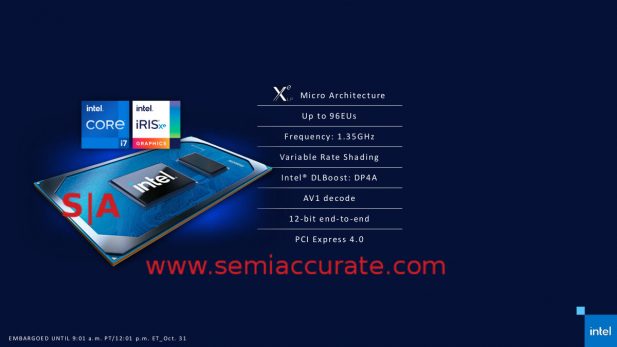 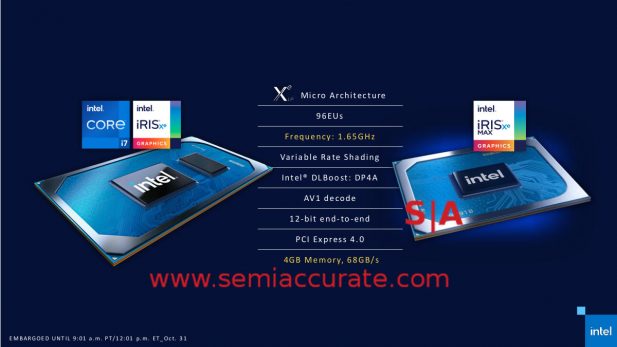 Xe Max with one chip

To make matters worse, Intel gave out no die shots, no package shots, and only vague BS renderings that impart nothing useful. To add to the confusion, the slide for the non-Max version appears to have an external GPU on the CPU, or possibly that is a memory die with the wrong shape, something which the non-Max supposedly lacks. The Max slide has a device without that external die so… so… see why we ask questions even if they are not answered?

Intel is lifting the embargo on this info at the time these notebooks go on sale which makes sense. They won’t supply any for independent testing for the reasons we mentioned earlier, they know the gaming performance is not there and no one actually cares about encoding speed on a notebook, phones take videos and encode them on the fly in a fraction of the energy used by these 28W GPU+GPU combos. And do it in much higher resolutions. At better frame rates. And more.

On the bright side, Intel once again discloses properly, and more. They even put in a handy table with the system specs, all of them, and did it clearly. Intel is the gold standard here and AMD has at least stopped complaining about their behavior even if they won’t do the right thing. Come on AMD, do what you criticized Intel for not doing earlier, we know you can. 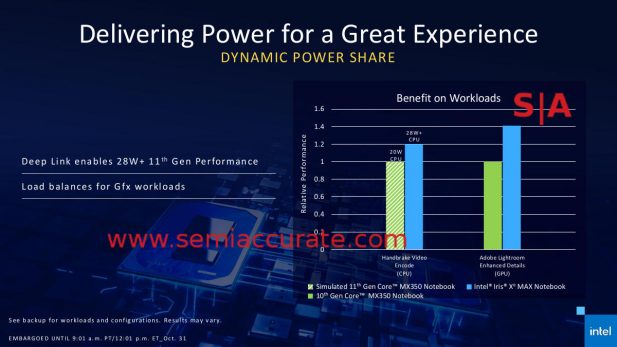 This is a win how?

The first of the sparse data that Intel tosses out doesn’t actually seem to be a win. They show a 10th gen part, an i7-1065G7 with an Nvidia MX-350 GPU, a Tiger Lake i7-1185G7 with an MX350 (Simulated), and an plain i7-1165G7 which is the “Max” one. Based on the numbers shown, the Nvidia bearing parts are a clear win in the first graph, 40% less power for 20% less speed is a clean kill in mobile, why Intel showed this graph is beyond us but there might be an explanation. That said they wouldn’t answer questions so it is likely accurate. The second set of bars omits the power numbers so it is likely less favorable to Intel than the first. Who allowed these to be published without explanation? 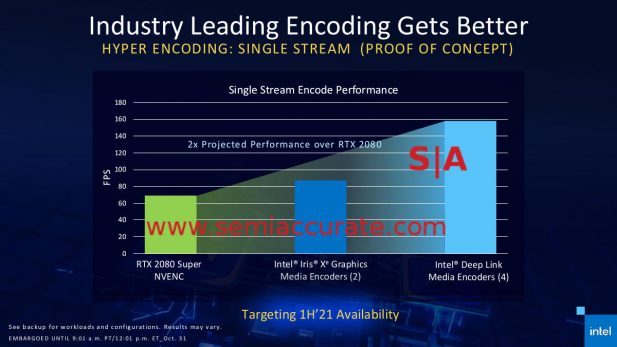 Intel goes on in another graph to show their encoding prowess and how the two encoders in an external GPU are additive to the two internal ones in an almost linear way. That is nice and beating a last gen desktop GPU is too, but what are we seeing? The 1H’21 availability, is that for hardware or software? Is it upgradeable? Will it actually come out? Will Intel use this capability as an upsell? No clue which again makes the claims worthless. Also do note the glaring lack of comparisons against any AMD mobile product, no points if you guess why. 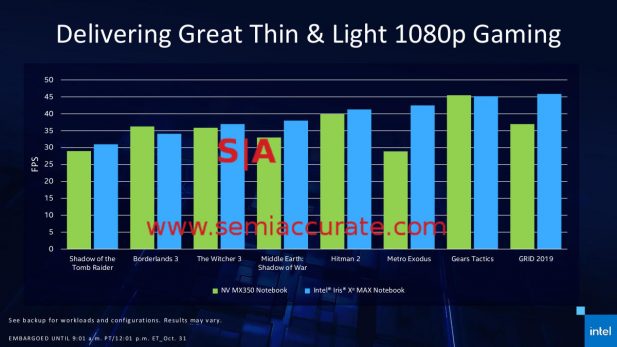 Then we come to one of the two slides that mention gaming performance even though that may be too strong a word. Here we see a Max notebook, still not sure if that is integrated, integrated with LPDDR4, integrated + discrete, or integrated + discrete + memory, barely beating a bottom of the barrel, two generation old Nvidia Pascal MX350 mobile GPU. Worse yet it although the Intel solution does indeed break 30FPS, the average is in the 35FPS range, that is well short of the 60FPS most consider to be what gamers need as a minimum. The second slide shows the Max variant going slower than the non-Max in half (1 of 2) games. Uh… 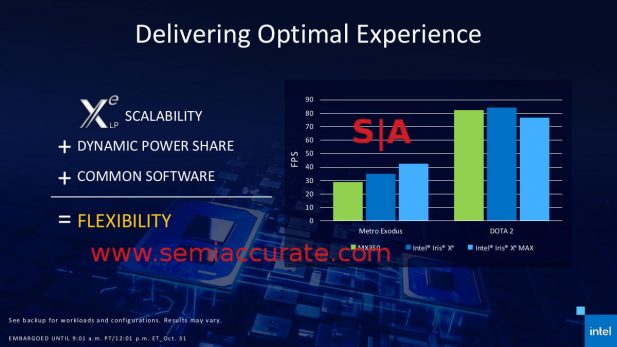 Once again note the lack of comparisons against any AMD Ryzen 4000 series mobile product, they routinely post numbers about twice as high as Intel is touting. And cost less. For some reason AMD wasn’t shy about providing systems to independently test before launch either, almost like they weren’t afraid of real numbers being shown. There are ways for Intel to launch devices like this and keep their head high but they steadfastly refuse to do so.

And that brings us to the end. What is Intel actually launching today? We still aren’t sure but it looks like two discrete GPU solutions, or it just may be two brands for Tiger Lake’s internal GPUs. Everything is so vague and ill-defined that it is impossible to state with any clarity what is going on. We did ask Intel the first round of obvious questions but as of this writing we did not get any answers much less clarity.

Intel once again does their tattered reputation damage by trying to sneak out ‘news’ in a way that they hope will grab them headlines and avoid the merest hint of critical oversight. This type of desperation to grab positive stories tends to backfire and hurt the product as is the case here. We see nothing that this does better than an AMD Ryzen 4000 mobile which is an 8-core device that tends to cost significantly less the Intel solution.

This is important because of one thing, drivers. Up until this presentation, SemiAccurate was waiting for these parts to come out to replace the author’s aging Broadwell laptop with. We purchased two AMD Ryzen 4700 laptops a few months ago and had to return them because the drivers simply did not work. Since that time AMD has picked up their driver game to the bare minimum and Intel is backsliding to the point where we have to question the viability of these parts. To put the best spin on it possible, our enthusiasm for Intel’s Xe graphics have been shattered by their messaging, I guess the old Broadwell box is going to soldier on for some time yet.S|A