Evo vs Ryzen in a test of mostly irrelevant tests

Today Intel is trying to show that their ‘Evo’ tuning results in a better laptop than AMD’s CPUs. SemiAccurate went over the details and checked up on the claims, and the result is mixed.

Lets start off by saying Evo, the marketing brand for the second gen Project Athena, is not about performance tuning, it is specifically designed to exclude non-Intel silicon. We know this because when it was launched, we directly asked that question and Intel confirmed it, then didn’t post the Q&A session for replay. That said since you can make the same laptop and not get the sticker, what’s the problem? MDF.

If you want to drink from the Intel slush fund money hose, you better get that sticker. Like Ultrabooks before them, the money behind the marketing is so extreme that not following those ‘guidelines’ and not getting the sticker means your laptop is essentially non-viable in the market. It really is that bad, $75-125 BoM adder per unit in the Ultrabook days, double that to get the rough MSRP gains. $150-250 price adders is death on the store shelves. This time around, you are welcome to put in any non-Intel silicon you want but saving $5 on a better Wi-Fi solution means, guess what?

With that out of the way, the official reason for the Evo brand isn’t just blatant anti-competitive behavior is it makes a more usabe laptop. They do this by tuning the devices to narrow the gap between performance on AC power and performance on battery power, a laudable goal. Intel claims a 5% drop in performance when moving to battery power and that AMD has a 38% performance drop. Seems like a serious problem for AMD, right? Sort of but that is a small enough slice of the bigger picture that it is mostly ignorable. Lets take a look at why. 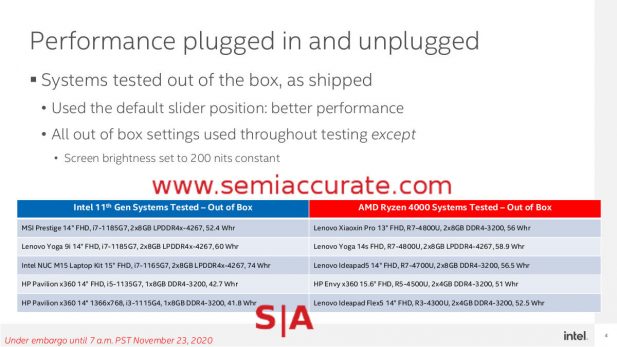 The systems in question for the test

First of all we would like to congratulate Intel for great disclosure once again, the slide above with the systems is backed up by more details in the footnotes. AMD could learn a lot here. You can nitpick about memory channels, DDR4 vs LPDDR4x and so on, but the systems are pretty close. The battery capacity for the Intel systems added up to 270.9 vs 274.9 Whr on the AMD side, how much closer can you get? The CPUs are all in the same wattage class too, about the only issue here is that they are all tunable across a 10-15W range and what the state of tune is for each is not readily accessible. That said given some of the numbers later on, it looks pretty fair on the surface. So what are the results? 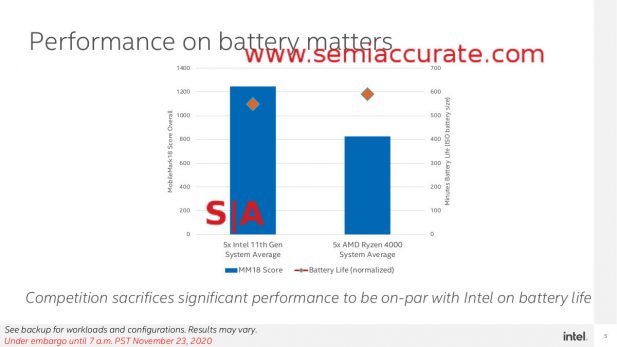 Shocking! Intel beats AMD silly in MobileMark 2018 by more than 50%, that is a pummeling of absurd proportions. Then you look a little closer and see that AMD has a battery life advantage of about 10% which one of the reasons we made the claim about the CPU TDP settings above. So Intel is ‘faster’, AMD has better battery life. Pretty cut and dried, right?

Intel goes on to show how AMD’s performance radically drops on DC power vs AC, and Intel wins on each test as well. The problem? The tests are MobileMark, 2018, PCMark 10, WebXPRT v3, SysMark 25, a PPT to PDF conversion/save, Excel to Word import, Word to PDF, and Outlook mail merge. Again what is the problem? The canned tests are about as close to bullshit as you can get, Anything that uses them should be seen as badly skewed data and any conclusions they draw should be dismissed out of hand, it is that bad.

As for the others, well, being a Linux user I am on Libre Office rather than MS Office so I can’t say the numbers presented are out of line. That said what kind of Word file takes 30-60 seconds to save as PDF on a modern machine with a PCIe3/4 SSD? I could go on but you get the idea. From SemiAccurate’s point of view, we don’t see many people doing large mail merges and huge batch conversions on battery power repeatedly as part of an average user’s casual work day.

There are also no games and only one content creation benchmark, Cinebench 20, which is about as widely derided as Dhrystone relevance and not really any more useful. All the tests are based on studies Intel did about how people use their laptops, and the people questioned don’t seem to game, do heavy work, but do mail merge, save insanely complex files in non-native formats, and do 3D renders quite a bit. The test suites are broken and gamed to the point of being a marketing tool, not a benchmark, and the rest seem… odd.

We don’t think the tests shown are representative of very much but Intel does win them all, quite handily in most cases. More importantly the tests show performance on AC and DC power. Intel’s performance drops a tiny bit on battery, AMD’s is almost universally doubly digits down. These tests are mostly single threaded, light duty, and AMD does win on absolute battery life so you can make up your own mind which is more important. 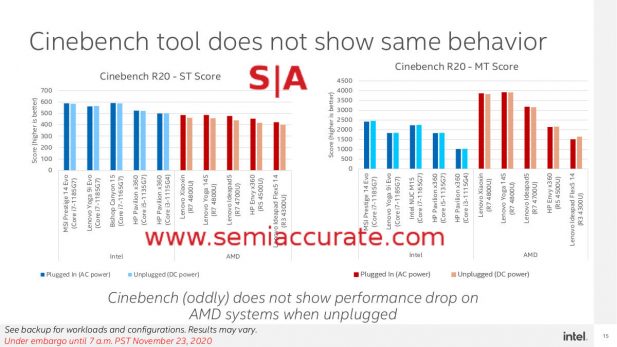 Can’t we get a real benchmark?

If you look at multi-threaded performance on the right however, you will see that AMD absolutely destroys Intel and loses effectively no performance on DC power. Interesting as well, but the real questions are what is the battery life in both tests and how much work could either get done for a given amount of energy. The latter would be shown by how many runs of the test could be completed before the battery runs out. The take home message here is if you run exclusively single threaded content creation tools, Intel rocks. Multi-threaded, AMD is 50% faster. 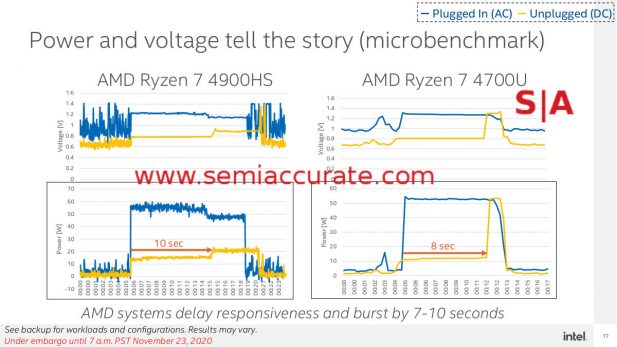 AMD energy use on AC and DC power

What ties all this together? As Intel points out, AMD tuned their laptops to slow down clock ramp/turbo/whatever by a few seconds to save energy when on battery power. Delaying spikes in performance is a valid tuning tool that has up sides and down sides depending on your workloads. Intel rightly pointed out that on DC power, AMD is very conservative here, but it is a choice. Part of the Evo program is tuning the parameters that affect this to optimize battery life while minimizing performance impact, fair enough. 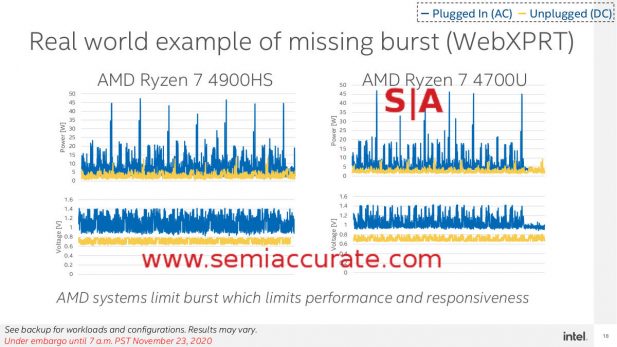 Intel then goes on to make some conclusion about how this makes the Tiger Lake CPUs a better product than the AMD Ryzen 4000 mobile parts. They also claim that laptop testing should be done on battery power or if you have to, on both AC and DC. Given the data set presented, SemiAccurate thinks these are basically correct but that is only part of the story. The problem is that we don’t feel that the tests provided are a good picture of what laptop users actually do.

The benchmark suites used are at best propaganda tools that reflect nothing more than Intel’s ability to game the system and should be ignored for cause. The rest are not bad but not reflective of the real world in our opinion. There should be games, media playback, and more, some of which are claimed to be in the suites above but as we said, ignore those.

One last data point to throw out, this tuning Intel does is in software and for Windows only. If you change OSes or even if the OS is upgraded, chances are this tuning will vanish. It is like security patches, for OEMs it is a cost without payback so the chances are that it will vanish and not be replaced on the next OS update. AMD’s tuning is likely hardware based so it will survive and be cross-platform. Which way is right? Yes. Seriously though, they are both choices, neither is right or wrong.

There are a few conclusions you can draw from Intel’s release today, Intel is faster on some single threaded apps and loses less performance when moving to DC power. AMD has better overall battery life and better multi-threaded performance. The AC/DC performance is due to tuning parameters while the single/multi-threaded performance is due to the devices themselves. In the end a buyer should chose what matters to them the most, but consider all the data carefully, and add a lot more benchmarks to the mix before you make your purchase.S|A