AMD is launching the Pro versions of their Ryzen 5000 Mobile line today. SemiAccurate thinks these parts will be open up lucrative new market segments for AMD.

If you recall the Ryzen 5000 Mobile parts AMD launched last January, and you know how AMD phases launches, you are not going to be surprised by the release of this Pro variant. If you take the three 15W U-series R5K Mobile parts and add 50 to them, you get the new lineup. The clocks and TDPs are the same, AMD just added features relevant to the corporate set to the ones found in consumer models. Unlike the non-Pro R5Ks there are no higher wattage variants or Zen2 cored dies. 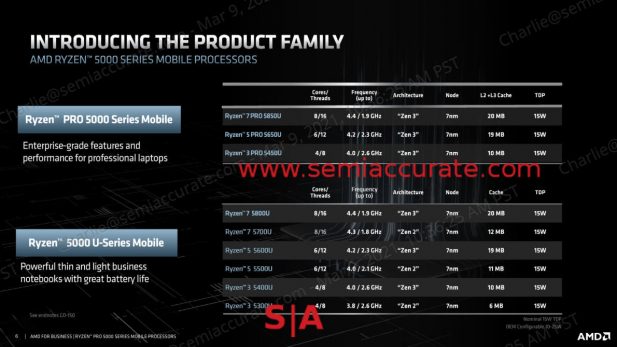 What does that added 50 bring the buyer? Three things according to the slides, security, manageability, and market stability. The last one is the easiest to describe, 18 months of software stability and 24 months of product availability, table stakes for consideration of large corporate deployments. In short AMD is doing what needs to be done to sell into this world. 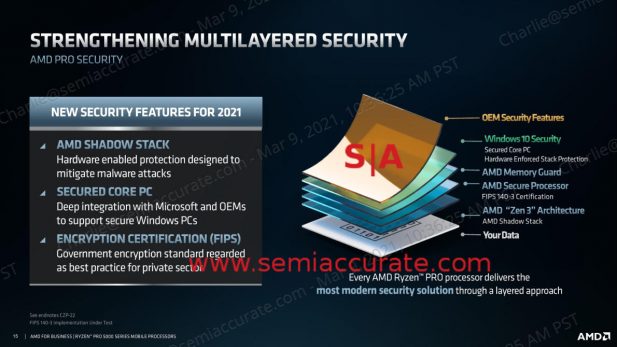 On the security side there isn’t much new, AMD’s security offerings are on their third generation of a line that has been proven in the wild. Some other x86 vendors talk loudly but fail to deliver relevant technologies if you dig in to what is actually being offered. This time around AMD adds Shadow Stack protection and FIPS 140-3 certification, both of which add real value for customers. Secured Core PCs are also on the list but that is Microsoft only and entails the use of insecurable OSes so SemiAccurate recommends avoiding that specific technology.

Manageability is the last pillar of the trio and is not new to the Ryzen 5000 Pro line. The previous two iterations were all built on DASH and it worked but was a little feature light. In the Ryzen 5K Pro line, AMD takes one step forward and several back by adding features but tying it to MS Endpoint Manager. Once again tying ‘security’ to an insecurable base is not a good idea and since AMD could not point us to a securable framework that is compatible, we will just say avoid this one. One look at the news in the past few weeks will tell you why Microsoft products are antithetical to a securable network but if you are chained to the millstone, this will be comforting as you sink beneath the waves.

Overall the new Ryzen 5000 Pro Mobile line has all the goodness of the non-Pro line plus a few security, manageability, and product stability updates. Nothing amazing just building on a solid foundation of consumer parts and prior generations. Since it is socket compatible with Ryzen 4000 we should be seeing a large number of designs in short order. Then again we said that about the non-Pro 5000 and while those technically exist, SemiAccurate has never seen one for sale on the open market.

The best part of the Pro lineup for AMD is that it brings them solidly into the corporate market. Yes there have been previous generations that tried to play there but never with outright class leading performance and the backing of the right OEMs. This time AMD has all the pieces in place for real and a track record of reliable delivery to show. Why is this important? Those extra 50 on the model number add a lot more margins than you probably think.S|A