17 new boxes from both x86 vendors

Dell is launching 17 new servers today, five with AMD’s Epyc and 12 with Intel’s unnamed upcoming CPU. This announcement may seem fairly ordinary but it shows off some profound changes in the market that SemiAccurate has been talking about for months.

Lets start out with the products themselves, all 17 of them in one picture. You can decode the product names, other than the telco models, starting with the last digit. 0 = Intel CPU, 5 = AMD, and the digit before that is the socket count, at least for the mainstream parts. From there it gets messy but the key takeaway is the CPU vendor digit. 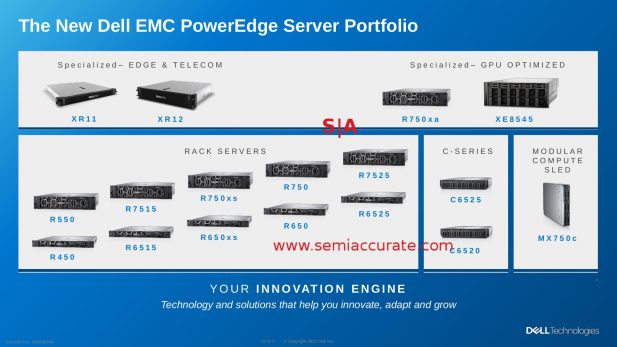 All 17 chassis in one slide

The big bang from the launch, other than a bunch of seriously well engineered servers including several for niches like AI and dense compute, is when they launch. Although some of the launch materials say 2nd Gen Epyc (Rome), the press deck and the spokesperson commentary specifically call out 3rd Gen (Milan) for the devices. Since the two are socket compatible, SemiAccurate expects both to be offered as options for the near future.

Remember how we laughed at Intel’s intentionally misleading statements about Ice Lake-SP production at CES? SemiAccurate told you the real story months before when we said March shipments best case to OEMs, add a few weeks for production of servers like the Dell offerings above. The current shipping Ice Lake-SPs are said to be patched D-1 parts with fixed D-2s coming… any guesses? There is a reason Dell isn’t launching now, even with the “115,000” not-quite-final-but-we-forgot-to-mention-that-for-some-reason units shipped to date. Reputable vendors wait for real volume shipments and fixed silicon, and Dell is the epitome of a reputable vendor. When these new Dell Ice Lake-SP servers ship, they should be both actually available and have the correct stepping CPU in the box.

So back to the new releases, Dell is launching a full line of servers for 2021 with both AMD and Intel offerings. What SemiAccurate finds most interesting, other than the ship dates, is the product mix. Mainstream offerings are split between AMD and Intel machines, telco is all Intel, but GPU optimized is AMD on the high end. Intel’s intentional crippling of features is biting them hard with these lucrative sockets going to the silicon with the most connectivity, something that won’t change until Sapphire Rapids. If you want a bleeding edge well engineered AMD server, you can buy them today from Dell, Ice Lake variants follow in 6-8 weeks.S|A