Lenovo thinks outside the box with ThinkGadgets

IDF 2011: Tablets, Monitors, and a ThinkThinky

Lenovo is finally starting to think(pad) outside of the box, and at IDF, they showed off what they have for toys. Amid the really nice laptops, there were three standout items, a monitor, tablet, and keyboard.

Remember that Lenovo USB monitor I mentioned in the DisplayLink article? The short story is that it is called the Thinkvision LT1421, and it is the first ‘professional grade’ USB monitor SemiAccurate has seen, the Field Monitor Pro is in a different class. It is a 14″ panel, and quite bright given it is USB powered. The down side is that it only has a 1366 * 768 resolution, painfully low, but still doable with a USB2 port. They should be on sale now for about $199. 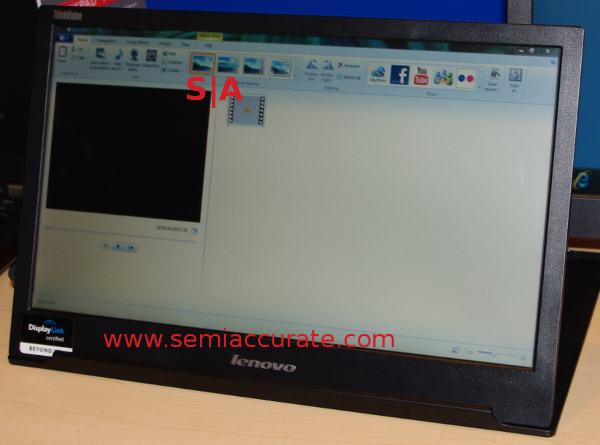 From there, we move on to 2.5 more goodies. First is a multimedia remote with a keyboard, cleverly called the Lenovo Multimedia Remote with Keyboard. Who knew? This is the second generation part from Lenovo, and the new one has backlit keys, and it feels a lot better than it looks. It works a lot better than you would expect too, and for $99 or so, it is a great thing for media centers. 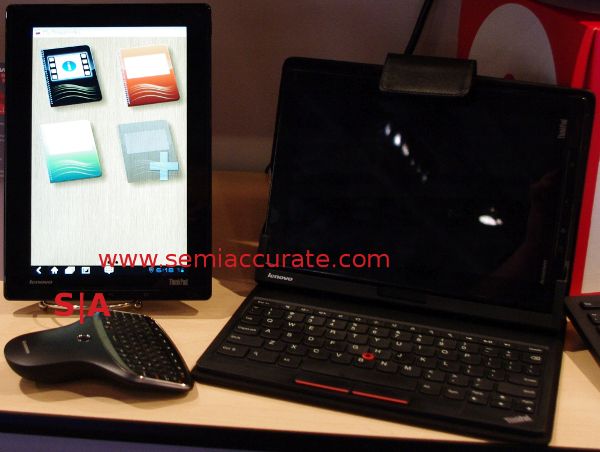 The other interesting one is the ThinkPad Tablet, again, the first ‘business’ tablet that doesn’t come with a silly price tag. It is a fairly standard Android 3.x/Honeycomb part, nothing incredible, but it should have a more ‘work oriented’ set of bundled apps. You can see a list on the Lenovo ThinkTablet page if you are into un-nukable apps that could possibly be useful.

Where things get interesting are the keyboard and docking station. The ‘laptop’ on the right is the tablet docked to the removable keyboard. If you can live with a 1280 * 800 rez laptop screen, this combo looks like a killer for short trips and light duty work. Since most laptops are saddled with 768 vertical pixels now, it is actually better than most ‘real’ computers where it counts.

What Lenovo showed at IDF was not any particular device, more that they don’t necessarily think like you would expect them to. Lenovo is not making cool looking things with pieces that fly off before you power them on for the first time (I am looking at you Sony, stop making shiny crap!), they make cool looking things that last. What more do you want?S|A

Note: We tried to get some of these parts to review, but Lenovo didn’t respond. Again. It has been three years of trying to get on anything more than an advertisement mailing list, and we give up. They seem perfectly capable of sending out reams of stuff to every third tier craptacular site with ‘giz’ or ‘gadget’ in the title, but won’t so much as respond to well reasoned requests from sites 5x as large as some of those. Don’t look for many more articles about Lenovo on SemiAccurate, up until recently, we thought quite well of them.