In our words and theirs, theirs are more damning

Intel (NASDAQ:INTC)  has come out with another chip to fend off ARM (NASDAQ:ARMH), and once again, it is a joke. Welcome the new 32nm Cedar Trail Atoms, chips so powerful that even if they worked right, no one would care.

The short story is that Atom has now moved in to the 32nm world, a year later than promised, under performing, priced too high, incompatible with the things users want, and with still non-functional drivers. Luckily, the main advance for the new chip, DX10.1 support, was silently removed, and almost all traces of that feature scrubbed from the new release documentation. If you want the raw numbers on the chips, the Atom N2600 and N2800, read this.

Lets go back to the point, the utter failure of this CPU, and the Atom line for computers in general. Intel is trying to compete against ARM, and has completely failed. Quick question, name one tablet on the market with an Intel Atom CPU in it? If you can, there is one that I am aware of, try naming one Atom based tablet that has actually sold enough to pay for the system design costs? There are none.

How about the ‘craptop’ sector, aka netbooks. Intel was completely blown out of this market by AMD’s Brazos platform. Intel’s response? If you are thinking that they might actually release a chip that is in the performance ballpark of the competition, you would be wrong. The new CPU cores, contrary to the Intel PR, are exactly the same as the older version, just smaller and a bit more power efficient.

CPU performance is the same abysmal loss to Brazos that the older one is, just smaller. Luckily, GPU performance is in another league. Unfortunately, that is not a plus, the GPU loss to Brazos, or any modern ARM part, is far far far worse than the CPU loss. It is painful, but that doesn’t stop Intel from telling the press that it will beat Brazos. More troubling is the fact that the press repeats the lies, but hey, you do get what you pay for.

Getting back to the GPU side of the house, Cedar Trail was supposed to deliver DX10.1 graphics. The transistors are there, the performance should be there, but, err, the drivers are not. Again. No really, just when you thought Intel could not make worse drivers for graphics, they do. There has not been a single Atom part that had functional drivers, ever. There has not been a single Intel desktop graphics core that had drivers that didn’t absolutely suck, and Sandy Bridge is going to repeat the worst performance on record, that of the i965 and G35. What is that? To literally never deliver functional drivers before the chip is replaced. Congratulations Intel, your streak of needless performance failures is unbroken.

Let me repeat that in case you didn’t get the point, Sandy Bridge will never have functional drivers in a way that users can access, if you bought one, you got screwed, and there is literally no recourse. Once again, in case you can’t connect the dots, Cedar Trail is shipping with DX9, not the promised DX10.1, while almost every competitor has stopped shipping DX10.1 parts, and has moved on to DX11.

With 3 days to go in 2011, the chip was finally ‘triumphantly’ released to no fanfare, and the silence was deafening. The actual part does not seem to be available yet, but that is splitting hairs, the ‘launch’ was in 2011, really. It is still too slow, still incompatible with the software people want, still has core features removed, still does not have even minimally functional drivers, and still it costs too much. When you can buy an ARM SoC that wipes the floor with Cedar Trail in performance for less than half of what Intel charges for Cedar Trail and runs the intended software correctly, why buy Intel? When you can buy a full Brazos board and CPU for less than twice what Intel wants for the CPU only, why buy Intel? Please note that the two options listed above do actually work, Intel’s Atom drivers preclude that possibility.

Note: We pointed out the first link to Intel, and they seem to have wisely removed it quite promptly. For reference, it was a Spanish page for Cedar Trail that contained a PDF entitled, “ISG Cedar Trail Press Deck.pdf”, the same as the one off the main page. This one had 8 extra pages with notes and talking points that were obviously not for publication, but ended up live in the open. The insights they give are fascinating, and show how little Intel thinks of it’s own product. Yes, we have a copy saved. 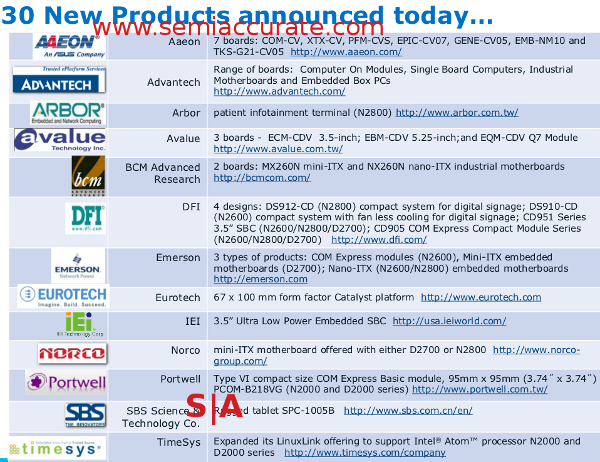 A fanboi’s dream product list if there ever was

Page 11 is titled, “30 new products announced today”. Anyone ever heard of any? Me neither. Anyone absolutely crave one? Unless you run a convenience store, probably not, but with 7+ billion people on earth, odds are at least one is pining for a Portwell Type VI compact size COM Express Basic Module, right? Win for Intel here, most competitors would have to settle for products that consumers actually want and can purchase, but Intel doesn’t need any of that. Bold move to change the market there guys.

Page 12 lists ‘Performance Leadership’, but doesn’t actually list specifics as the chip is inferior to every competitor in just about every way. Luckily, the tame ‘press’ doesn’t question the chip’s ‘superiority’. 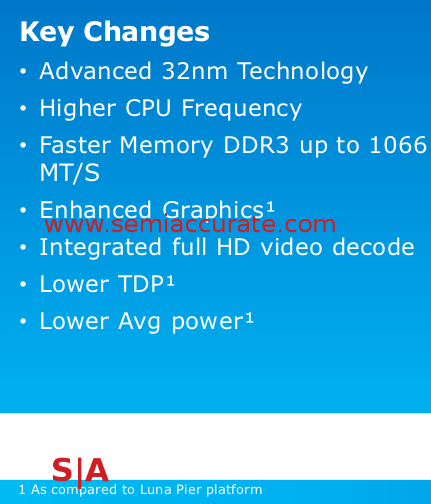 No competition needs for this chip, eh?

Page 13 has a hilarious bit, under ‘Key Changes’, there is a bullet point titled, “Enhanced Graphics”. Note the footnote, it is “enhanced” only compared to Luna Pier, the previous generation Atom platform. If Intel compared Cedar Trail graphics to any competitive parts, even assuming that they get working drivers out some day, it would lose. So they compare it only to the older and quite unacceptable part, so it ‘wins’. If Intel compared Cedar Trail graphics to a 3rd grader with a crayon, the graphics would lose, even if it was an exceptionally slow 3rd grader with multiple closed head wounds. An enhanced turd that doesn’t work is hardly a performance milestone.

P15 contains the next whopper, Cedar Trail is priced WITHOUT a chipset, something you have to buy as there is no other option. That chipset, NM10, is priced at $20. Combined with the $47 N2800, that puts the full price at $67 vs $84 for a full Brazos board, CPU, chipset, mobo, and all extras. At retail. I want some of the drugs Intel is on when they priced this, their world seems like a more fun place than the drab one I live in.

The summary on P16 has yet another gem, how the chip has best in class response time of any Atom CPU. Note the lack of competitor comparisons, mainly because it literally loses to every one of them outright. Luckily, it has enhanced HD, which again loses to literally every competitor. No footnote this time though.

P19 continues the hilarity, with OS choices listing Meego, the failed Intel OS that they summarily knifed in September. Protip: If you want to make yourself look like a clown, press releases touting admittedly failed and canceled products are a great way to do it. 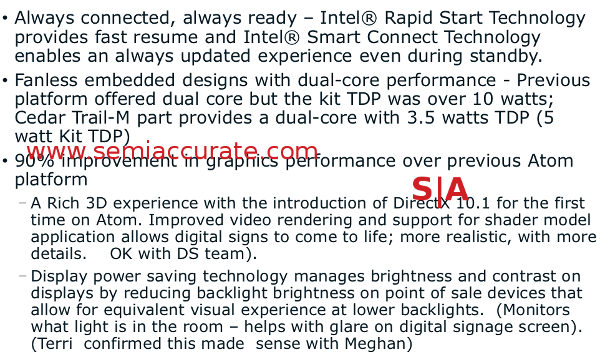 Page 21 continues the hilarity, and it is a target rich environment. “90% improvement in graphics performance over previous Atom platform .” Har har, I guess the deficit to the competition was too large to compute with mere Intel CPU, especially one with 64-bit mode fused off for customer monetary extraction reasons. Pentium FDIV bug resurfacing? Luckily, that 90% also includes, “A Rich 3D experience with the introduction of DirectX 10.1 for the first time on Atom. ” Except that Cedar Trail doesn’t actually do DX10.1. Luckily, the DS team seems to have approved it anyway. Did I mention that all the competition has DX11 offerings? Does it make sense to Terri and Meghan? It doesn’t to me.

Page 22 confirms that several other talking points are OK with Meghan too, Terri checked. 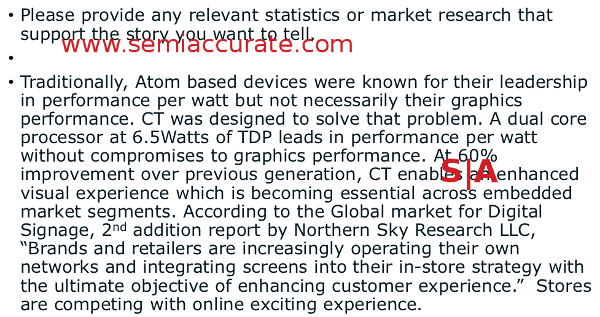 Page 23 starts out with a bang. “Please provide any relevant statistics or market research that support the story you want to tell. ” Note that the next bullet point is blank. Coincidence? If not, it is still hilarious, but the biggest lulz on this page are yet to come.

“Traditionally, Atom based devices were known for their leadership in performance per watt but not necessarily their graphics performance. CT was designed to solve that problem.” *BLINK* Do you see what I see? Do you see Intel admitting that Atom graphics suck? I do. It goes on to say, “A dual core processor at 6.5Watts of TDP leads in performance per watt without compromises to graphics performance. ” Except that the drivers simply do not function, DX10.1 was removed, and a 5W AMD Brazos slaps Cedar Trail silly for GPU performance. And it comes with functioning drivers at no extra cost. DX11 divers no less, same lower price. Then again, facts are simply problematic data points when promoting products, right?

Please note that the 90% improvement two slides earlier is now a 60% improvement on this one. Then again, since the graphics drivers are non-functional on either generation, you could argue that the performance difference is zero. Fortunately, that little girl with the crayons and closed head wounds is slowing down these days, so…… 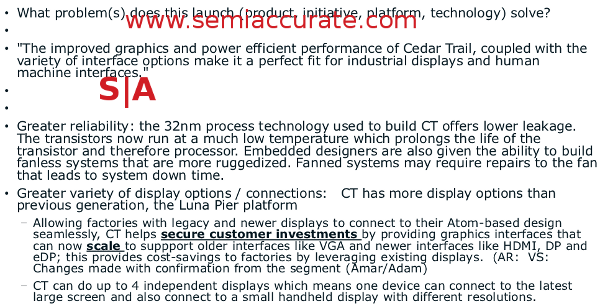 Page 24 gets painful. “What problem(s) does this launch (product, initiative, platform, technology) solve? ” The next line is blank. Not coincidence? Buy an ARM SoC or Brazos, they can solve problems.

With all of the above info, you can see why Intel proudly launched Cedar Trail without so much as a whisper, much less a banged drum. At this point, Atom is so pathetic that Intel has to pay people to make designs with it, at least according to OEMs during our last check with Taiwan. There doesn’t seem to be a single consumer design win, and the ones that are listed are likely purchased. The CPU is too expensive, a year late, pathetically under performing, and has simply non-functional graphics. At least Intel is consistent. Time to pack it in for craptop oriented Atoms. I mean it guys, you look stupid.This is how we view Atom, it didn’t have to be this way.S|A