Gigabyte has three new gaming oriented toys, a keyboard, mouse, and 3-slot, 9-heat pipe, 5-fan overclocked GPU. In case you were wondering, two of these are on one side of the price spectrum from the other.

To start things off with a bang, Gigabyte is offering a massive 3-slot overclocked GTX680 called the Super Overclock. As we said above, this board has nine heat pipes and five fans to back up a massive full length vapor chamber and huge fins. The fins are not the final ones, they will be replaced with angled ones like the Gigabyte Windforce models, something that will theoretically improve efficiency.

This beast obviously won’t fit in two slots, but most gamers don’t care about that. It is specced for 500W of power, but since it only has a 6-pin and an 8-pin, I am not totally sure how they get there. In any case, you need all three slots to dissipate that wattage safely, even with the vapor chamber and heat pipe overload.

If you are expecting a screaming monster, Gigabyte isn’t about to deafen you. Three of the five fans turn off at idle, so the Super OverClock should be pretty tolerable when not gaming. When gaming all out though, we reserve judgment until we hear a final running product, but this class of parts isn’t aimed at average buyers. The overclockers who buy this board will appreciate one nice touch, Gigabyte has put a dual BIOS on this GTX680, something AMD has done for generations, but Nvidia hasn’t gotten around to yet.

Final specs and prices haven’t been settled upon, mainly because Gigabyte will keep trying to push the limits until they have to ship boards. Currently, the aim is for an 1137MHz base clock with a 1202MHz max boost clock. Given the overkill cooling, that boost tells you some interesting things about how tightly Nvidia binned the GTX680, doesn’t it. Not good.

Gigabyte is calling their mouse Krypton, and while it is for gamers, it isn’t glowing green. Krypton does two things that I have never seen before, two different bases and a unique weight adjustment system. Neither will change the world, but both look unique and useful. 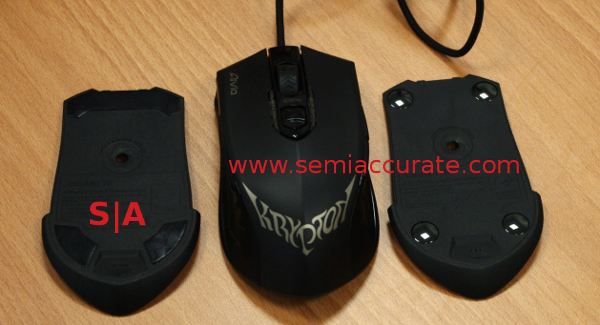 Krypton minus the Kryptonite

If you look at the removable base panels on the Krypton, you can see the one on the left has teflon feet, the one on the right has ceramic. Some gamers prefer one, others the other, so Gigabyte lets you swap them out when you want, a new trick to me. There is also a two sided mouse pad with different surfaces suited to the feet you choose.

The weights are interesting too, with 10 holes on the bottom in a U shape for placing them. Krypton is symmetric, and you can hold down two of the side buttons to change it from left to right handed in hardware, a really nice touch. The U shape lets you put weights on different sides if you care to, and then change it for left/right handed use. This tells us that Gigabyte has at least one left handed product planner that likes to game.

Last up is the Aivia Osmium keyboard. It looks pretty standard, a large black keyboard with mechanical Cherry red switches and a blue backlight. There are five macro keys on top and two scroll wheels beside them. The scroll wheels are volume and backlight brightness, and you can click either as an on/off switch too. The Aivia name plate on the capslock/numlock lights also doubles as a switch to change the macro key settings. Nifty. If that isn’t enough, there is a full USB3 hub in the keyboard, quite useful considering how hard it is to find a system with enough front mounted USB3 jacks.

Overall, Gigabyte is showing that for gamers, there are still a lot of little enhancements to look forward to. OK, the Super OverClock GTX680 isn’t little or subtle, but innovation is far from dead on both the high end and low end. None of these products are going to change the world, but all have some nice new features SemiAccurate hasn’t seen before.S|A