Seagate’s USM Slim is a really useful addition to laptops

Computex 2012: Finally, a use for those worthless optical bays.

At Computex, Seagate showed off a whole host of machines with USM slots, and one very interesting new idea, USM Slim. This is one of those ‘really good ideas’ that is long overdue.

If you don’t know what USM is, they’re Seagate external drive cases that are basically a plastic case around a SATA drive that plugs in to a form fitting reader. That reader is essentially an eSATA port with power, the key is not the connectors on the back, but the physical dimensions of the cartridge, the X, Y, and Z dimensions are essentially the spec. Since the SATA-IO picked it up as a spec, anyone can make the carts, but the market isn’t exactly brimming over with 3rd party cartridges.

At Computex, the Seagate booth looked like another yawner, oh look, a new Lenovo K4 consumer desktop that has nothing going for it. It has a USM slot. Yay? Here is another device, bay, or other widget with USM ports too, be still my beating heart. Short story, crappy cheap devices with a USM slot do not make for anything other than a crappy cheap device with a USM slot. That said, there are probably good devices with USM slots, but I have yet to encounter one that is not tinny, overpriced, and DRM laden to stupidity.

That was when Seagate pulled a fast one on me, and showed me a then unreleased specification that made a ton of sense, USM Slim. Imagine taking the USM spec, it specifies a thickness of 14.5mm, and cuts it to 9mm. The rest of the spec is irrelevant, mainly because the other dimension are gated by those of the 2.5″ SATA drive. Short story, a tad less than 2/3rds the height, just perfect for the new slim 2.5″ SATA drives hitting the market to slide in to. Ultrabooks may be stupid and customer abusive, but there is at least one good thing to come out of that morass. 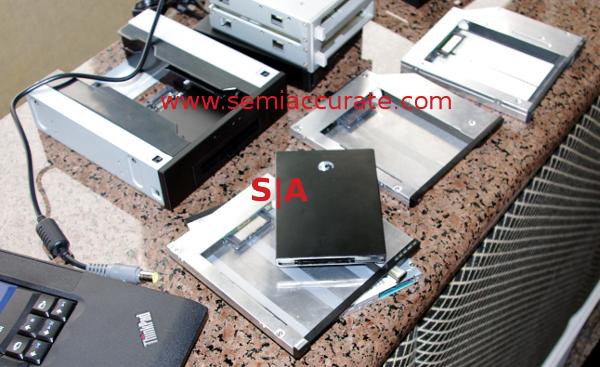 The bays of the future

As you can see, the devices themselves are not that different from USM drives and bays, but there is one big difference, the new ones now fit within the height of a laptop CD bay. You know, those useless optical disks that for some reason add cost and weight to an otherwise useful laptop? Now you can remove them, if you bought a decent laptop to begin with, and add a worthwhile device that is not a battery.

This won’t of course fit in an Ultrabook, but if you are dumb enough to buy one in the first place, you probably have enough trouble figuring out how to plug in the power without starting a fire. That said, in a usable portable computer, USM Slim will slot in just fine. Have a notebook with a small SSD that is great for anything but your music or movie collection? Don’t want to add a second HD that continually sucks battery power? Want to keep your private data secure if you are using an insecurable OS? Now you have that option.

USM was a decent enough idea, but was obviated by the coming of docks like the Thermaltake BlacX. Laptops on the other hand are ripe territory for a spec like USM Slim to standardize a useful addition that the OEMs want to keep proprietary. Since the dock itself is a fairly low-tech pass-through, making versions for popular laptop lines should be easy and cheap.

Seagate planned at Computex to release the spec to the SATA-IO, and given the press release about it, it looks to be really open now. With that, say goodbye to proprietary and expensive laptop HDs, and welcome to USM Slim. How can you complain?S|A