AMD adds a server GPU lineup to the mix

AMD has two new server GPUs out, please welcome the new FirePro S7000 and S9000 cards to the mix. The two are Tahiti and Pitcairn ASICs, but different from their W-series brethren.

Officially, the FirePro S line of GPUs are server parts, not workstation parts like the W-series, but they can be used as workstation boards if you need to. What is the difference? Cooling, outputs, and drivers, specifically virtualization functionality. The W line of boards are the same rough idea as Nvidia’s Quadro line, OpenGL drivers certified for most software that matters, that would be Autodesk and related wares, plus slightly more robust construction, all for a much higher price.

The S branded cards are passively cooled, a must for high density server installs, have more DP power, and the drivers are certified for most VMs and hypervisors. In addition, you only get one DP out, but with DP 1.2, that is good enough to run three monitors even if that is not a likely server configuration. For this, the price goes up, just like Quadro vs Tesla.

So, what are the cards? The Pitcairn ASIC that is the basis for both the W7000 and the new S7000 cards are the full XL variant of the chip with 1280 shaders. Before you look at the spec sheet, if AMD ever decides to release one with the shader counts, the naming schemes are changed again. We are happy to report that the naming is MORE rational for once, take that Intel! What did AMD do? Changed the count from shaders, essentially the equivalent of CPU pipelines, to cores. In the new AMD speak, each CU is now a core, so Pitcairn is a 20 core GPU. This may sound pointless, but it makes so much more technical sense it almost brings a tear to our eyes. Sniffle. 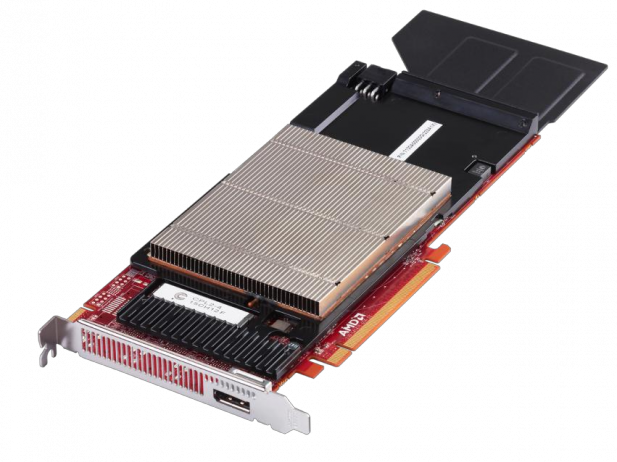 FirePro S7000 GPU is only one slot

Back to the card, like the W7000, the S7000 runs at 950MHz, but other than that, nothing appears to be fused off. It has the high end memory configuration, 4GB of 256-bit wide GDDR5 running at 4.8Gbps. This allows the card to feed the claimed 2.4TF SP or a meager 152GF DP, laughably low against the competition. The up side is that the card is passively cooled and only takes one slot. If you don’t need DP, you can cram eight of these in to a server case without much worry, and they do support PCIe3, even if the rest of AMD doesn’t. 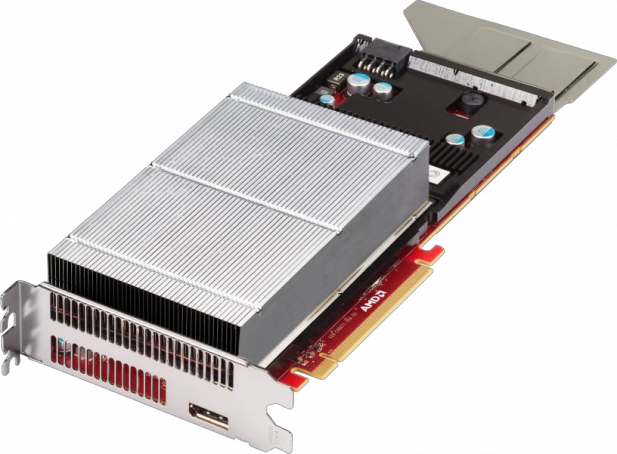 Interestingly, the S9000 has ECC listed on the spec sheet, the S7000 does not. The S9000 bandwidths are all called out with “(ECC off)” after the number, so that means it is not real hardware ECC. This is probably similar to Nvidia’s fake ECC in that it maps 72-bit virtual channels on to 64-bit physical channels, and loses 1/6th of the bandwidth as a result. It is a hack, but it does get the job done, and explains why the memory specs on the S9000 are so high. 5/6ths of 264GBps is 220GBps, higher than the 176GBps of the W8000 while adding ECC. The only down side is TDP, you pay for those extra GHz of memory bandwidth with wattage, 35W to be exact.

Other than no fan, what do you get for that money? Virtualization support mainly. For the VDI set, that is worth the extra cash, it can pay for itself quickly when you look at ROI and TCO. The S cards support VMWare, Citrix, and even MS RemoteFX should you be evil enough to inflict that on your user base. For VMWare and Citrix the mapping is 1:1 for VMs to cards even though we hear the hardware supports more. In short, these cards allow VDI to become more or less a reality without hamstringing GUI performance, GPU compute functions, or simply adding more VMs per box in a traditional setup.

It will be interesting to see third party TCO numbers when all is said and done, if a FirePro S7000 or S9000 can add a dozen or two users per VDI box, it could well be worth the price of adding a few to every server. Then again, TCO calculations are usually finicky, situation specific, and less honest than a presidential candidate’s vague budget plan. We shall see how this market turns out, but there is definitely merit to the VDI concept, and now, two cards to back it up with hardware.S|A