Intel launches Itanium 9500 and still no one cares

No tech, no customers, no point really

Yesterday, Intel announced the brand new Itanium 9500 series, and no one cared. Luckily, the technology-free slides were filled with self-congratulatory hot air, but not much else.

Let us tell you the entire story with two items, it uses the current Xeon socket but which one was not specified, and the slide below. In it are the hardcore technical points, 2.53GHz, 170W TDP, down from 185W previously, 8 cores max, and a 12-wide ISA. The models? Not listed anywhere. 8-cores at 2.53GHz? Good question, but not answered. That’s the extent of what Intel said. 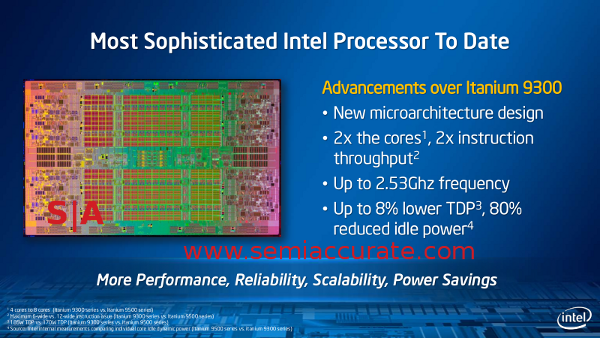 This is as deep as Intel got

Intel has released a chip in to a line that no one cares about. It long ago achieved the one goal that Intel set out for it, more due to the opposition’s incompetence than any inherent Itanium goodness, mainly because it lacks any. Itanium floundered in the market for generations, kept alive by contractual obligations and HP’s money, but still no one cared, not even Intel. Itanium was the product line given to executives who had fallen badly out of favor with management but weren’t smart enough to quit. In the end, Oracle killed it out of mercy, thank you Oracle.

Intel continues it’s almost unbroken streak of dumbing down press briefings to the point that nothing but self congratulatory pablum is put out. Releasing technical information seems to now be a firing offense in Santa Clara, and no real questions are suffered. Itanium is still positioned as a viable product, I suppose some press are dumb enough to believe it, and we still seem to be at war with Oceania. One thing for sure is that Itanium is deader than ever, and this turkey won’t change a thing.S|A

Author’s note: The one thing we can say without a hint of sarcasm is that Intel is finally cleaning up their code naming schemes. For once, they put in a code name that is indicative of the product’s performance, capabilities, and visualizes the platform potential for the customer. The Itanium reference platform is called Crater Lake, apropos eh?