Ingenic Semiconductor powers two of the most innovative devices at CES

There were so few interesting things at CES the show was almost painful, but CPU maker Ingenic had two of them at their booth. To make things more odd, one was a dongle, the other a wristwatch, guess which was the best thing I saw at the entire show?

You probably don’t know about Ingenic Semiconductor, but they make small low power MIPS CPUs to compete in many of the same niches as ARM SoCs do. Most observers never noticed them until they made headlines by powering the first sub-$100 tablet a few years ago, but they have been around for a while. That said, seeing the company at CES was a surprise, but seeing the devices made with their chips was an even bigger one.

First up is the Z3 wristwatch by a company called NeuFashion, and it is not just a timepiece, it is a full Android 4.1 tablet with a 1.54″ capacitive touch OLED screen and full b/g/n Wi-Fi support. OK, the screen is only 240*240, but it is a wristwatch, and that rez at an inch an a half ends up being a pretty amazing PPI figure. Small OLED screens don’t take much power, and the Z3 has a “>500mAh” battery, so it should last at least all day. 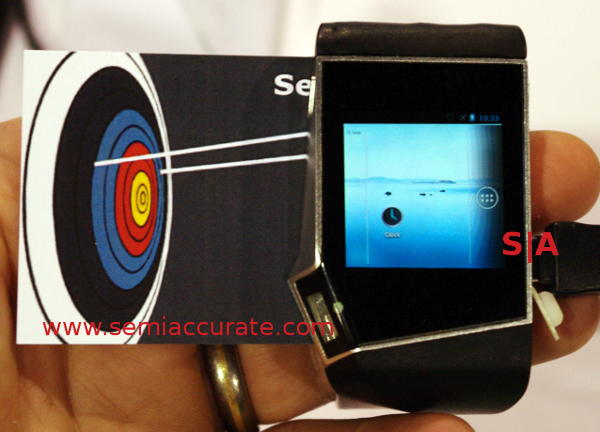 The watch that Dick Tracy would have killed for

More random specs, 4G RAM and 4G of ROM are listed, but I suspect the RAM figure is flash, not DRAM. It also has FM radio, 3-Axis gyro, compass, motion sensor, speaker, vibration, and a microphone. The optional 20″ subwoofer backpack adapter is sold separately. Just kidding, but there are several hard keys on the side like most watches have, and the styling is, err, unique to their market.

On top of that, the Z3 has a headphone jack, micro-USB for data and recharge, but no micro-SD slot. Given the size, 8.9mm thick, and not much more than an inch in any dimension, that is understandable, where would you put it? It also lacks a camera, not to mention any voice or 3G/4G data capabilities, but this is not a phone, it is more of a PDA crossed with a app capable watch. Best of all, the CPU in this device is the Ingenic JZ4770, a single core 1GHz 65nm MIPS32 R2 CPU. It may not make power users swoon, but when was the last time you had a wristwatch that ran at 1GHz? Now you see why I was surprised?

The other product was something I mistook for a memory stick when I first saw it, but the IPPea device did look like a first gen USB3 flash drive. When the cap was pulled off, there was something under it that looked like a USB port too, but on closer inspection the IPPea stick has an HDMI plug on the tip, not USB. The full name of the device is the IPPea TV, which might give you a clue as to what it does, as may the little green MIPS PC wording under the name on the top. 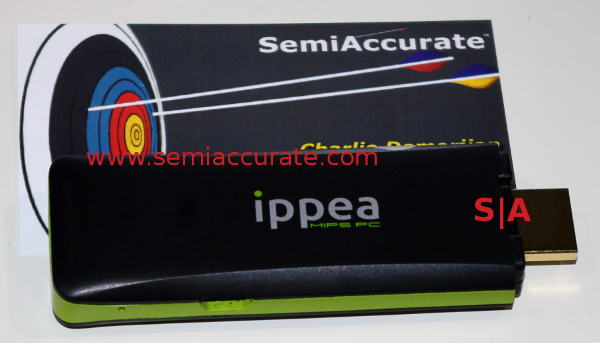 This is not a memory stick, it is a full Android PC

This is the device that really floored me at Ingenic, it is a full 1.2GHz Android 4.0.3 PC in a memory stick form factor. It is powered by a 1.2GHz version of the same Ingenic JZ4770 as the Z3 above, and the spec sheet claims 4GB of ROM and 4GB of flash storage. RAM is listed 512MB, a much more believable figure than the 4GB in the Z3. That said machine translation may be to blame here. It also has a microSDHC slot, so you can add up to 32GB more if you need.

On top of that, the IPPea TV has Wi-Fi b/g/n, USB2 ports, and an additional USB OTG as well. The idea is to power it off of the USB port from the TV, but if that isn’t possible, there is a DC input too. You can also plug in a keyboard and mouse, but with Bluetooth support, that seems like a better way to go.

The idea is as simple as it is elegant, this is not a TV tuner but a full Android PC, it generates the content, not simply receives and displays it. Plugging in to the HDMI port is in my view genius, it is just the right way to go. Set top box with lots of cables? Boot devices, hardware detection, and home directories? Screw that, take your entire PC with you, data and all, plug it in to any HDMI port, and you have 1240*700 digital video, apps, or whatever. Best of all, it is less than $50US at retail in Hong Kong, available now.

While there may be other Android set top boxes available, none have the simplicity of the IPPea TV. You can keep it in your pocket, and it should be compatible with just about everything out there with a screen. It isn’t exactly a powerhouse computer, but it should be more than good enough for light duty work and presentations, not to mention the odd movie. If not, you can always VNC in to your real PC and use that. I want one, and the IPPea TV is my pick for the most innovative device at CES. While the list of candidates for that honor is painfully short, this one really stood out. Well done IPPea.S|A