In pictures, details, and a few hard specs on the new APU lineup

AMD will be refreshing their product logos in 2013, some of which were shown in AMD’s CES 2013 presentation. They cover the APU offerings for this year, codenamed Richland, Kabini and Temash.

The following might make you scratch your head at first sight, because the branding alone is outright confusing, but hopefully the following table will help out a bit. Here goes, hope you enjoy it… 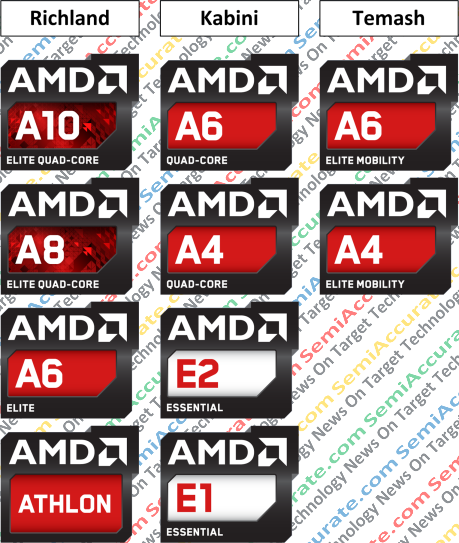 The first thing you should notice is that the A6 brand applies to all three APUs. This means the lowest-end Richland will be A6 as well as the top-end Kabini and Temash. The visual difference in the logos would be the three keywords, namely “Elite”, “Quad-core” and “Mobility”.

So the first keyword is Elite which means they would get a little more love from AMD. That’s right, Richland, being nicknamed “Trinity 2.0“, meaning the successor to the A-series APU halo. Temash, AMD’s first complete SoC design for mobility form factors will be the focus of AMD’s 2013 APU offerings, at least from a marketing perspective. So here are some bullet points that might or might not appear on the specifications sheet of future PCs with AMD APUs, you can guess why for yourself.

The fact is, everything listed above can be enabled through software with optimizations for APUs, Kabini and Temash are actually the same chip with different on-chip fuses blown, ending up with different clock speeds, different numbers of hardware units active and different cooling requirements. (Author’s note: Hondo was obviously a typo in that article, because Hondo uses the Bobcat CPU cores, instead of the new Jaguar cores with architectural changes, so they can’t be based off the same die.) Thus, the software that runs on Temash should also run fine on Kabini systems, so it goes back to the marketing side, which is the market applicability based on its positioning and intended audiences.

That said, Kabini will target the ultrathin laptops/small form factor PCs (something akin to Zotac ZBOX Nano XS AD13) and the value-oriented markets.  They would also probably feature in some cheap Facebook machines with a large 1366×768 screen in your local Walmart real soon, while the top-end Kabini A6 could be very hard to find. Let’s hope it doesn’t get forgotten less than an hour after the launch.

The next keyword, Quad-core, is rather self-explanatory. So now you know A10 and A8 Richland, A6 and A4 Kabini will have 4 CPU cores. Then what about Temash with the smaller quad-core logo? The lineup of logos look like this: 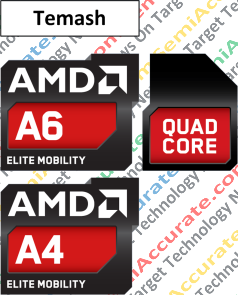 The side logo is for the Temash A6 APU and the A6-1450 version will be 1.0 GHz quad-core [Author’s note: If anyone missed that in the CES presentation more than a month ago, please take a look at it.] Then how many cores will the Temash A4 will have? So, six minus four equals to… Hm… Oh, and the last keyword, Mobility, is not that hard to understand given the trend toward premium tablets and convertible PCs, basically the market that Temash was aimed at. By the way, the AMD Z-Series branding will be retired as the new Temash A4 and A6 replaces it, let’s call for a second of silence in memory of this brand. Rest in peace Z-Series, we hardly knew ye. OK, done.

If the above is not confusing enough, think about when Kabini launches in June, there will be a family of dual-core A6 APUs (Richland) and a family of quad-core A6 APUs (Kabini) that serves both the desktop and laptop market. Fortunately, the arbitrary number (the first digit) of the APU model numbering scheme is here to save the day in case the price points of the PCs don’t give you a large enough hint.

And here are the rest of the side logos, pretty much self-explanatory.

Business-oriented PRO systems will no longer have their own APU model designations such as the B suffix, nor brand specific marketing crap printed on every page of the promotion materials. They now are just a side sticker on your business laptop. By dropping the VISION branding, this further simplifies things on the marketing side. It’s progress, yay?

At the end, AMD showed us how to simplify things while complicating things at the same time. The author thinks he might as well drown himself in Espresso the moment he finishes typing this very last punctuation mark.S|A