Rambus tries to speed up DDR4 and save power

You may remember Rambus from their lightbulbs, cameras, and crypto programs, but did you know that they also do DRAM technology? All jokes aside, at Techcon Rambus was showing off an improved DDR4 tech they call R+ Technologies.

The idea behind what Rambus is proposing is pretty simple, an asymmetric design that puts a bit more equalization on the controller and removes the DLLs from the DRAM itself. From there you do a lot more aggressive powering up and down of links and voila, R+ Technologies. Yes it is a lot more complex than that but it does work, or at least the demo at Techcon below did. 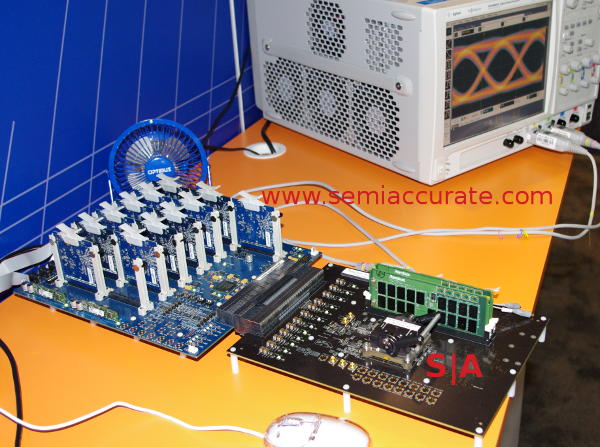 Note the eye at the top of the picture

The claim is quite simple, 4.8-6.4Gbps with single ended signaling, and 25% reduction in power over vanilla DDR4. Please note that the claim is for roughly doubling speeds AND reducing power by 25%, not doubling speeds OR reducing power by 25% like a lot of shady PR tries to foist on technically illiterate journalists. Oh heck, why not just toss in that the asymmetric design is also claimed to increase yields and only needs standard DDR4 connectors.

Does it work? The demo did, as you can see the eye is quite clean and speeds were as claimed on test silicon. Will it scale to production volumes? Will anyone license the tech, or more importantly will the industry as a whole, including those making the memory controllers in CPUs and SoCs jump on board? Who knows? The memory market is more about politics and back room deals than anything else but the one overriding theme for all players is cost. If Rambus technology results in a DRAM cheaper than without it, they have a chance. Faster, better, and even a tiny bit more expensive is a tough sell in this space.S|A