GTC 2014: An SoC and a GPU go away without mention or explanation

Did Nvidia just cancel their Project Denver core amidst the triumphantly disappeared projects at GTC 2014? If you watched the keynote, there were not one but two full projects that went *poof* with no mention of this change.

At today’s GTC keynote, Nvidia CEO Jen-Hsun Huang just triumphantly announced two new products, a Tegra SoC called Erista and a GPU architecture called Pascal. Both are being touted as the next big amazing thing, but those without memories shorter than a goldfish will realize exactly how bad these announcements are. Why? Because the products that were in those places just vanished without a trace.

Lets start out with the new Tegra device that follows the current Logan/T40/K1 SoC that Nvidia proudly showed off at CES. If you recall at GTC last year their roadmap looked like what is below, a slide we originally published here. 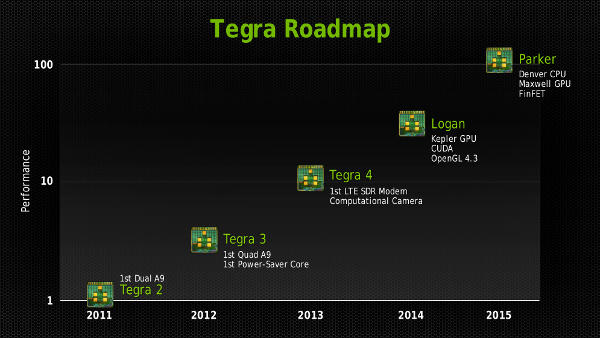 As of less than a year ago the roadmap went Tegra 3, Tegra 4, Logan, Parker. As of CES, Logan was renamed K1 instead of Tegra 5, but Parker silicon was shown off. That part as you know is Denver/T50 core based, and architecturally speaking is quite an interesting product. Again as of CES it was a going concern too, at least according to the keynotes, talks, and press/analyst briefings. All is well, right? Take a look at the Tegra roadmap in Jen-Hun’s GTC keynote today, courtesy of Patrick Moorehead.

You aren’t seeing things, 10 months after the last GTC’s roadmap and less than three months after the CES presentations, Parker went poof. Disappeared, no mention, no reason, no explanation, not even a correction, just gone. How’s that for executive honesty, instead of honesty we got a triumphant launch of a magical new part, a supercomputer on a Ritz cracker or whatever this one is touted as being. If you doubt that, in comic book lore, Erista is the unplanned son of Wolverine aka Logan. Doh!

Next up is the full-sized GPU roadmap. You might recall that at the same GTC last year, the roadmap went Kepler, Maxwell, Volta. Fair enough, Volta is a serious red flag for Nvidia for reasons out of the scope of this article. A mere 10 months ago, the roadmap Jen-Hsun presented at GTC looked like this. 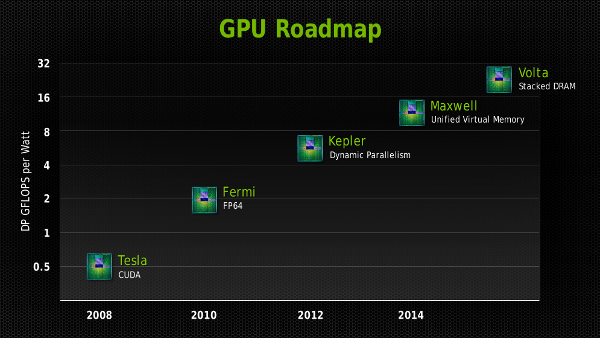 In short before that keynote the roadmap went Kepler, Maxwell, Einstein, the latter of which disappeared last year in a manner eerily similar to Parker. Now 10 months later we see the roadmap below, again from Jen-Hsun’s keynote, and again courtesy of Patrick Moorehead.

Notice the change? No Einstein is not alive again, it goes Kepler, Maxwell, Pascal, no Einstein and no Volta either. Once again you have an executive triumphantly announcing a new GPU rather than being honest and at least mentioning the things that are no longer there. If SemiAccurate wasn’t so familiar with Nvidia’s ethics we might be shocked by the level of deception. Unfortunately for the state of US corporate ethics, we are pleasantly surprised to only see it this bad.

In short Nvidia just canceled or pushed out by a year two major projects. Both of their lines, mobile and desktop were just summarily changed without so much as a mention from the CEO. If you have even the slightest confidence in Nvidia’s management, you really need to take a long, hard look back at their promises over the past few years. That said, we did warn you.S|A