Intel is finally releasing the 750 Series PCIe SSDs, a ‘consumer’ version of their datacenter grade P35-3700 lines. If you like absurdly fast drives, this is the next upgrade for you with a couple of caveats.

The new line has four members, two capacities and two form factors. You can choose a PCI half-height, half-length card or a 2.5″ HD shaped 750, both are available in 400GB or 1.2TB capacities. When the baby drive of a family is 400GB, you know it is a serious line. Luckily for our initial impressions, these drives really do hold up on their performance claims. While they probably won’t be cheap, if you need the speed…. 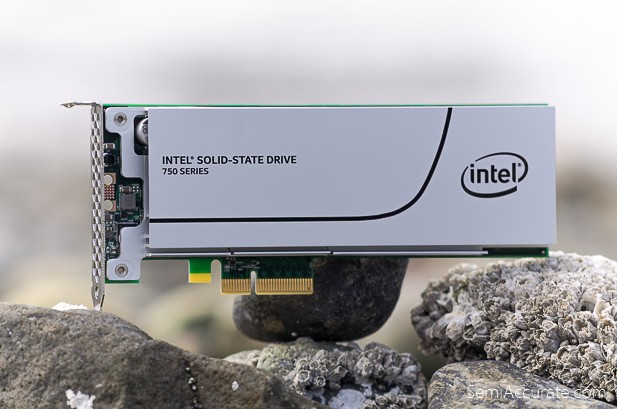 The first thing to note about these drives is the interface, 4-lanes of PCIe3 good for a theoretical 32Gbps or a bit under 4GBps once you take encoding and overhead into account. Both drives use the same electrical interface and should have exactly the same performance, they are just shaped differently for different use cases. On the PCIe card version, the interface is what you would expect, a 4x PCIe slot as you can see above. On the 2.5 inch HD form factor, what do you connect to? There really isn’t a common 4x PCIe3 cable standard is there? 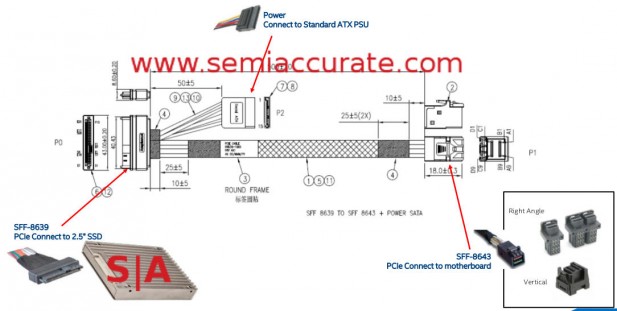 Not a general purpose cable

Actually there are two connectors for just this purpose, 12 if you count the nightmarish mess of a debacle that is M.2 but we won’t go there now. The two connectors are called SFF-8639 and SFF-8643 but neither of them are exactly common. The SFF-8639 is the drive side connector, that has previously been used for NVMe + SAS but this time there is no SAS connector. The other side has two plugs, SFF-8643 provides the 4x PCIe3 lanes from the board and a second plug accepts SATA power because, well it is common.

Luckily for users this SFF-8643 + SATA power -> SFF-8639 cable is included with each drive, if it weren’t you would probably have to knit your own because we can’t see anyone selling one on the open market, ever. You also need a board with the aforementioned SFF-8643 connector on it meaning a few of the more recent Z97 or X99 based boards. In short, just skip the 2.5″ form factor and go for the PCIe card variant.

Once you have it set up and your firmware is NVMe boot capable, you should be able to boot from an Intel 750 SSD directly. You can even run two in RAID0 but you have to use the MS soft RAID stack, something SemiAccurate doesn’t recommend for anything more mission critical than a benchmark test. RAIDed 750s are unfortunately not bootable, hopefully Skylake fixes this little NVMe hiccup.

If all this sounds bad, don’t let it put you off because what you get for it is worth the initial hassle. SemiAccurate’s Thomas Ryan is benchmarking one of these drives as this is being written so we will not talk about that side of things other than to say these drives are really fast, even faster than Intel’s claims. Intel is ‘only’ claiming 430/440K random read and 230/290K write IOPS for the 400/1200GB units respectively. Sequential takes the same numbers to 2200/2400 MBps read and 900/1200 MBps write, these are seriously fast devices.

For latency things get really interesting, sequential read and write is 20μs but random is 120μs for read, 30μs for write. Why is write latency 1/4 that of read? Easy enough, the 750 line has extensive DRAM caches to boost performance, 512MB for the 400GB drives, 2GB for the 1.2TB versions. When reading random blocks you have to hit flash every time so you get the worst possible time to first byte. For writes the data only needs to be written to DRAM before the host is signaled the write is complete, a much faster process. Since these drives are variants of the enterprise models, you can assume Intel made sure the buffers can’t be overrun by anything other than a pathologically designed torture test, we have faith they did right here.

Those familiar with servers will probably read the above with a look of horror on their faces about what I just said. Data written to cache being signaled as committed is the quickest route to corruption in the event of power loss, you have to be borderline insane to do that in a production environment. Luckily all of the 750s have supercaps to make sure the entire cache can be committed in the case of a power outage, no worries there. Like we said, the genesis of this drive means things like this are probably done correctly and for the right reasons.

Then we come to the power side with both capacities drawing 4W at idle or enough to keep them out of any laptop worth the name. The 400GB drive pulls 9W for read, 12W for write, both max draws/TDP that you will probably never see in the real world. This ramps up to 10W read but 22W write on the 1.2TB drive, a large gain.

When asked about this Intel had a very good explanation. First it starts out with the high-speed DRAM cache, a very power-hungry chip. the 400GB drive has 512MB, the 1.2TB drive has four times that amount with four times the power draw. That accounts for some of the difference.

On an SSD like the 750, a read command is very short and tends to only use some of the banks of flash. If you do a 4K read and the flash (likely) has 4K blocks, you only read one bank at a time. Writes on the other hand can be queued and are slower than reads but can be spread out across any available banks, the larger the queues, the more of the drive that can be utilized. The 1.2TB drive has twice the flash channels of the 400GB model so of the queue depth is there, it can use 2x the flash simultaneously. Again that takes power.

In the end the random read and write IOPS and the read vs write speeds show that in the end reading still moves data faster than writing, about what you would expect. When you dig down into the latency and power data, you can see a bit of how the drive works its magic, more cache, more banks, a shorter data path for writes, and more flash channels for the larger capacity variants. Once you wrap your head around how the low-level stuff works, the higher levels make perfect sense. The more you do, the more energy you use.

As you will see in SemiAccurate’s review of the Intel 750 SSDs, they are probably the fastest thing you can buy right about now. Since they are really the first consumer NVMe parts on the market, there are still a few form factor and driver related headaches but you get pretty stunning performance in return. In a year or two we will look back at these first consumer NVMe drives and wonder what all the fuss was about, they will just work. The Intel 750 shows that SATA is quite dead for anything without rotating media but there is a lot of headroom to go on a 4x PCIe3 connection and you can go wider from there. The sooner drives like this take over the world, the better.S|A