How to lose but not lose gracefully

AMD is finally talking about Caribbean Islands aka the R9-300 series of GPUs. SemiAccurate seen some good and some not so good in this line, and virtually nothing is what it appears on the surface.

Lets start out with the basics, the debate over the 200-series vs 300-series cards, are they new or rebrands. Technically speaking the answer is that they are all new, mostly, kinda, but they are definitely not the old 200-series. What has changed? Process tech, specifically the TSMC 28nm process has evolved quite a bit in the years since most of the 200-series cards debuted.

You might recall that when they launched, only Hawaii was new, the rest were in fact rebrands. This means most of the 200-series is now old, very old, almost too old to be relevant. On the surface the 28nm process they are built on is the same but if you look closely it has matured a lot, the general rule of thumb is a process gets about 15% better over its lifetime.

That is all fine and dandy if you are making a new GPU but an old one is designed with the older rules and gets little to nothing from these advances. To benefit from them you would need to redesign the entire GPU or at the very least lay it out again, an expensive and time-consuming task. With TSMC’s 20nm process being pretty awful and unsuited for anything much less a high-powered device like a GPU and their 16nm node woefully behind Samsung, 28nm is going to be with us for quite a while.

So AMD did what they had to and laid out the designs they had again with the 28nm updates. Although there are no new claims for process efficiency gained, the 15% number seems reasonable but it includes both clock and power savings. AMD would not even specify which process it was on, SemiAccurate suspects it is 28HPC+. So to settle the debate, these device are all new but look to software like they are the same old same old. Actually that settles nothing, flame on forum goers.

Earlier in the week AMD launched five of these new not-quite-rebrands called R7-360, R7-370, R9-380, R9-390, and R9-390X. Along with the all new Fiji, we can say it now and officially call Fiji Pro the R9 Fury and Fiji XT the R9 Fury X, they make up the 300-series cards. For code names starting with the 360 and working up we have Tobago, Trinidad, Antigua, Grenada, and of course Fiji. Please do note that Fiji is not a Caribbean island and nobody could explain that one to us. The rest of this article will focus on the non-Fiji cards, we will look at the new chips separately. 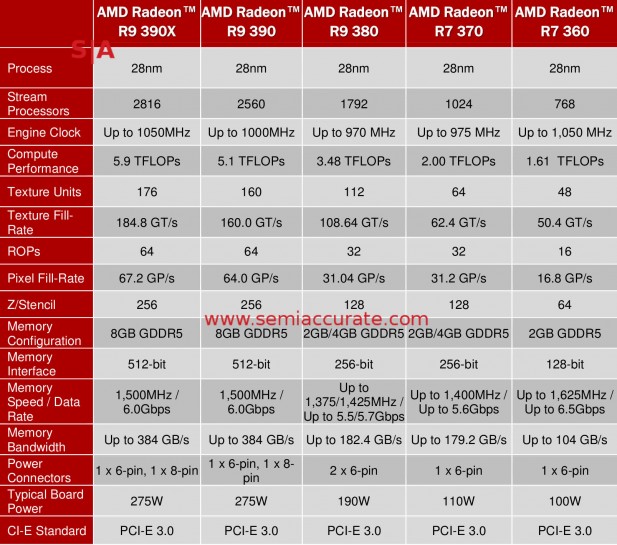 The specs in more detail

So what is there to say about the new Caribbean Islands line? Not much really, the architecture is older than AMD finds comfortable, the prices are lower, and there are now two new software tricks, Frame Rate Targeting Control (FRTC) and Virtual Super Resolution (VSR). Since both are software only, aren’t consistent across drivers, and are likely to be forgotten in the next generation, that is about all we will say about them.

That brings us to performance and how well these cards will do. In short they are going to get blown out of the water and AMD knows it. Worse yet they went out of their way to deny the press the opportunity to test these cards, they are that afraid of what independent testing will find. They just aren’t competitive and are priced way too high to make it up on price/performance.

Actually that isn’t the worst part though, sure AMD going out of their way to stifle reviews at launch is bad but the ‘benchmarks’ they put in the slide decks are something between embarrassing and deceptive, this low hasn’t been seen in a press deck for quite a while. Take a look at one of the first ‘benchmark’ slides they showed for the R9 390.

Come on, really? Are they this bad?

Did they really have to sink that low? Yes they did because the performance is really that bad. No it isn’t that bad, it is just priced too high for what it competes against, much too high. For the ‘real benchmarks’, AMD shows the 390 up against a Radeon HD7950 and a GTX 660 Ti, not anything it would be up against for real. The 390X is likewise shown head to head against similarly obsolete cards, the HD7970 and the GTX 670. It does beat both dinosaurs by large margins in an unspecified test with specifics buried in the footnotes dozens of slides later. If there was a Windows 8 driver for a Tseng Labs ET4000, I am pretty sure AMD would have dug one out to round out this ‘fair’ comparison. Worse yet it is saying that Nvidia not just pummels the new 300-series rebrands, they pummel it by being more efficient with a vastly cheaper to produce memory interface. Brilliant own goal there.

How to be sleazy with numbers

But it gets worse in the actual game benchmarks, the shatteringly low number of them that exist in the official numbers. If you look at the above chart you can see that the 390X beats the Nvidia GTX 980 by a bit even on the game that Nvidia paid to have crippled on competitors cards. That is impressive, right? A vastly less expensive AMD card beating a seemingly better Nvidia card, that is news.

Actually it is news and it is impressive for all the wrong reasons, namely how low AMD sunk to put out a paper win and how far they will go to deceive the press. This one takes the cake, a new low in modern press misdirection. Why? They tested all the games at 4K settings so they run at barely playable frame rates. Worse yet they have all the effects turned up on the games according to the fine print 30+ slides later.

The problem is that AMD took a few games and cranked up the memory requirements so high that they overran the 4GB buffer on the Nvidia card artificially hobbling performance. The only reason the 390X comes anywhere close to the Nvidia 980 is because it has 8GB and isn’t hamstrung by these artificial tests. In a fair fight the AMD card would be obliterated by the 980.

But it gets worse. You know that 4GB vs 8GB issue? It isn’t called out in the slide where the numbers are shown. It also isn’t called out in the fine print later in the deck, AMD only puts that ‘minor tidbit’ in the previous ‘benchmark’ but nowhere near where it should be. That is well past unethical and into the realm of purposeful deception. Between this and the way they purposefully kept cards from the press so testing couldn’t be done before launch, you have all the information you need about how well these cards perform. Or don’t as the case may be.S|A