Non-Volatile memory on the shop floor

Every time SemiAccurate talks about Everspin’s MRAM, a lot of people ask about what it can be found in. Today we can add another name to the list that is slightly out of our normal area of coverage, industrial programmable logic controllers (PLCs) from Koyo.

If you don’t know what MRAM is, read this article or just picture it as a non-volatile memory with a DDR3 interface and similar speeds. The public customer list isn’t that long because most buyers don’t want to broadcast anything that gives them an advantage but we can point you to Mangstor SSDs which have Everspin MRAM on board.

Today brings us to another less glamorous product, Koyo’s DirectLogic 205 series of PLCs, which now use MRAM for memory. If you think about it, large industrial devices on factory floors are a bit sensitive to power loss and data corruption. You don’t want a robotic arm capable of lifting a car to go crazy here and there, and industrial spot welders can ruin your day in a hurry. Data protection is critical and changing batteries can be a pain especially given the lifetime of large industrial machines. 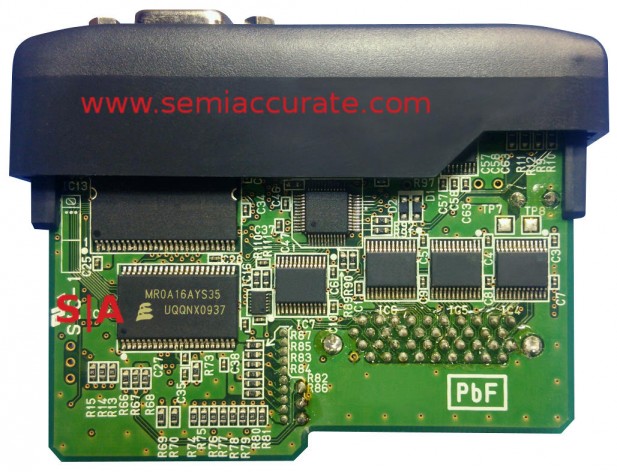 This is what a Koyo DirectLogic 205 PLC looks like

So the new 205 series has MRAM for data integrity, specifically a 1MB part on a 16b wide parallel bus. This may not seem like a big deal but in the controller space, that is a lot of memory to play with. On top of that, since it is non-volatile, any power interruptions just mean things can pick back up where they left off upon power up. Better yet the maintenance intervals and therefore downtime is reduced because you don’t need to change batteries or supercaps every few months.

Since we are on the topic of MRAM there are a few more bits to tell you about. Currently Everspin is at a density of 64Mb for their memory chips with 256Mb promised for later this year. All of these are planar MRAMs but there is talk of a perpendicular cell MRAM coming which will hopefully sample late next year. It is on the Globalfoundries 28nm process and should be able to hit 1Gb densities.

This is still behind modern DRAM cells for raw density but not by all that much. A shrink or two could get Everspin to the 4Gb density at which point MRAM becomes a very interesting alternative to DRAM for a bunch of markets. Adoption depends on cost of course and cost likewise depends on volume to a large extent, but that bottleneck should be broken once GF starts cranking up production.S|A