3GLTES 2015: Speed is only the beginning of the tech

Qualcomm unveiled their new X12 modem last week and it is packed with goodies. It has Cat13 uplink, LTE-U, 802.11ad, and LWA but SemiAccurate thinks the cool stuff is not the raw numbers but how it is all integrated.

The Snapdragon 820 will have a modem branded X12 and the big news is some carriers are calling it 4G+. It delivers the raw numbers starting out with Cat 12 downlink, that is 3x 20MHz carrier aggregation and 4×4 MIMO support along with 256-QAM modulation. This all adds up to 600Mbps downstream which should be possible in the real world. On the uplink side we have a Cat 13 modem good for 150Mbps via 2x 20MHz carrier aggregation and 64-QAM, plus some other goodies.

On paper this is all nice but how the X12 gets those numbers to work is far more interesting. On the downlink the X12 can support one carrier with 4×4 MIMO for a net throughput of 400Mbps with 256-QAM. Moving from 64-QAM to 256 is said to increase throughput by 33%, the uplink sees a 50% gain going from 16-QAM to 64. Modulation does matter but if you understood what we just said, you probably knew that.

Back to the downlink, in 4×4 MIMO mode the X12 can’t do carrier aggregation, it is stuck at a ‘mere’ 400Mbps speed. If you want to go faster you need to bond three 20MHz channels but that is only supported in 2×2 MIMO mode for about 195Mbps per channel. Advanced math says three of those channels are good for 585Mbps or close enough to 600Mpbs that we won’t quibble much over the naming. Basically you can do 1x 4×4 or 3x 2×2, take your pick or more likely take whatever your carrier can support. Anyone see a ‘gigabit’ X12+n modem that can do 3x 4×4 in the future? Me too if you can fit that many antennas in a phone, but they are getting bigger fast too.

The uplink is interesting for completely different reasons starting off with the name, Cat 13. As we mentioned earlier it is now valid under 3GPP rules to separate out the up and downlinks with different names. This means there won’t be a combinatorial explosion of categories, things should be clear and simple. OK we admit the ‘Cats’ are about as clear as mud, mud designed by committees without ties to the reality humans live in, but this is a good step in the right direction. So X12 is a Cat 12/13 device and the naming passes marketing guidelines, yay?

The spec sheets say Cat 13 uplinks offer 150Mbps much of which comes from uplink carrier aggregation, a first as far as SemiAccurate has heard. The aforementioned 64-QAM modulation means each of the two 20MHz channels is good for 50Mbps or a total of 100Mbps upstream. You may have noticed that 100Mbps is less than 150Mbps, the math is hard to argue.

That extra 50Mbps comes from compression of the data stream, an area of claims that is often filled with curious explanations. In this case the compression is not on the data stream itself but the headers and packet related overhead, something that can be easily losslessly compressed.

While we are not familiar enough with LTE frame and packet headers to say how much gain is possible in the real world, the 50Mbps gain doesn’t seem to be out of the realm of possibility. Qualcomm is officially claiming “Up to 79% compression gain” that is transparent to the data layers of the network stack so LTE frames must be pretty bloated. That said we are still not bored curious enough to read the entire LTE frame minutia white papers while there is sand to be sorted by size in the world. Maybe tomorrow. 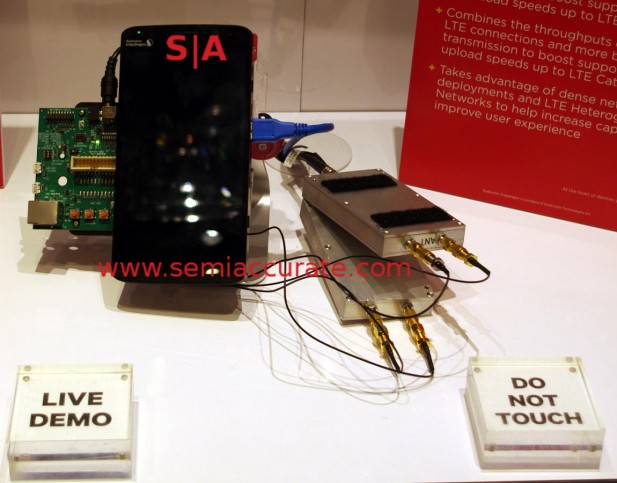 More interesting than either spec is that the X12/Snapdragon 820 has the ability to use both streams simultaneously at full rates. In a demo at the 3GLTE Summit, Qualcomm was showing off a 4K video that was being sent to an 820 reference device which sent it back out to another device, both over LTE. The video played at full rez without any stutters with data speeds reaching nearly 200Mbps (196.9 to be exact) down and close to the full 150Mbps up (146.2 in one picture we took). The difference in speeds was a file transfer working simultaneously in the background, the 4K video alone is not enough to eat all that bandwidth so more had to be added. Good luck running this torture test with a modem from a tier 3 vendor any time this decade.

But wait there’s more! The X12 is not just LTE and 3G for that matter, it also as Wi-Fi capabilities. In the case of the Snapdragon 820 that means 802.11n, 802.11ac, and 802.11ad with support for 2.4GHz, 5GHz, and 60GHz bands. You may be a bit disappointed to hear that the 820 can only light up two of these radios at once but if you have a need for more than one input and one completely separate output channel, please write in with your use case, SemiAccurate really wants to know what it is so we can ask obnoxious detailed technical questions next time. For science. And fun.

Things get more interesting when we asked about LTE and Wi-Fi working simultaneously. This of course depends on how the device in question is actually made, for example are the full complement of antennas in place for LTE? Is the device wired for 4×4 MIMO or the full 3x 2×2 CA MIMO? The X12 can antenna share for LTE and Wi-Fi so depending on what the OEM/ODM does for physical layouts, any specific device may or may not support the full capabilities of the modem but if done ‘right’ you can in theory do 600/150Mbps via LTE plus 802.11ac plus 802.11ad. Yes simultaneously. Once again we don’t have a sane use case for more than three channels, in, out, and wireless docking of the device over 802.11ad, but if you have one the 820/X12 can support it. And that is where things get interesting because of the two new protocols supported, LTE-U and LWA. LTE-U is a known idea, offload the downstream data to Wi-Fi while keeping the upstream data path on LTE for reliability reasons.

Newer on the list is LWA or LTE Wi-Fi Aggregation which is like LTE-U but it removes the need for an LTE uplink. This may drop reliability but it keeps all the data stream local so you can do lots of tricks only available with local control of both streams. In a corporate environment this could enable virtual PBXs and other ways of using an LTE device as a local corporate desk phone seamlessly. If it all works correctly your cell phone becomes your office phone with a local connection while you are in the office on campus Wi-Fi but falls back to your standard cell device when you are on LTE. Qualcomm calls this Multifire and it could have a bunch of interesting implementations when it rolls out.

All this is of course possible because of the X12’s capabilities to do so many streams and hand off between each of them. It isn’t just a case of X Mbps in and Y Mbps out times Z channels, it is the smarts behind it to route everything (hopefully) seamlessly. This is something you can’t do, or at least it would be very hard to do with discrete chips. Thankless timing nightmares are just that, good luck doing with four discrete radios and an underpowered CPU much less doing it in a mobile power budget.

The last little trick is fast becoming mandatory, closed loop antenna tuning. If you recall the iPhone 4’s ‘antennagate’ problems, you probably realize that holding an antenna changes its capabilities slightly or in some cases not as slightly as some might hope. Fixing this is hard and closed loop antenna tuning should help minimize the problem on the fly, not just lessen the chances of it happening in the first place. From an engineering perspective it is a very hard problem that will be interesting to see the details about how Qualcomm solved.

So that is the Qualcomm X12 modem, Cat 12, Cat 13, 600Mbps, 150Mbps, 802.11ac, 802.11ad, 802.11n, and a host of other acronyms. As we mentioned it isn’t just about the raw data rates although a 600Mbps LTE connection backed by a multi-gigabit 802.11ad stream delivers that, it is about integration and seamless handoff. That is the future of comms, walking into an area and your video stream flips to the most appropriate radio channel without dropping a frame or you touching a button, it just works. The X12 had the capability to do a lot of this now, or at least soon when it is released, not to mention when the infrastructure catches up. It may not be the complete answer yet but it gets us a lot closer than anything else.S|A