ARM charts out the path to printed plastic chips

ARM showed off a unique M0 cored SoC at Techcon, it was a plastic chip. While plastic and organic transistors are not exactly new to SemiAccurate, this one was made with imprint technology too.

The idea behind imprint lithography is pretty simple if you can wrap your head around how rubber stamps work. Imprint lithography is much the same but there are nuance differences, especially the way Molecular Imprints does it. The key difference there is that the ‘ink’ is sprayed down like an inkjet printer and the stamp is pressed into it wicking the liquid into the stamp’s gaps rather than putting it down with the surface. That said conceptually the two are fairly similar, you have a stamp and a liquid to start, then a dried ink imprint when done. 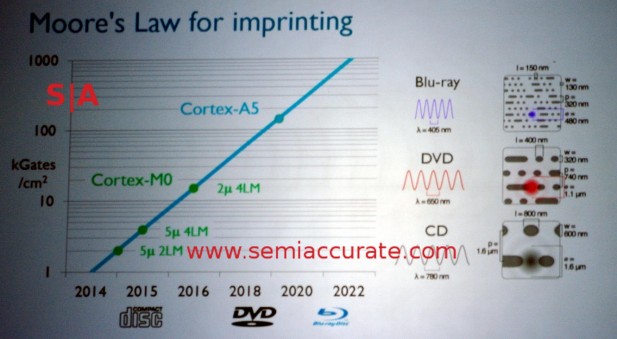 As ARM rightly points out in their Techcon main keynote, optical disks are made in much the same way, imprint and then film deposition. This is once again different from the method Molecular Imprints uses, but pretty similar until you really get down into the details. The real difference is that rather than make RFID tags and other borderline trivial circuits, ARM implemented a full SoC with this technology. They say it is the first SoC made with plastic/organic chips which we think might be true, but even if it is not the first, it looks like this. 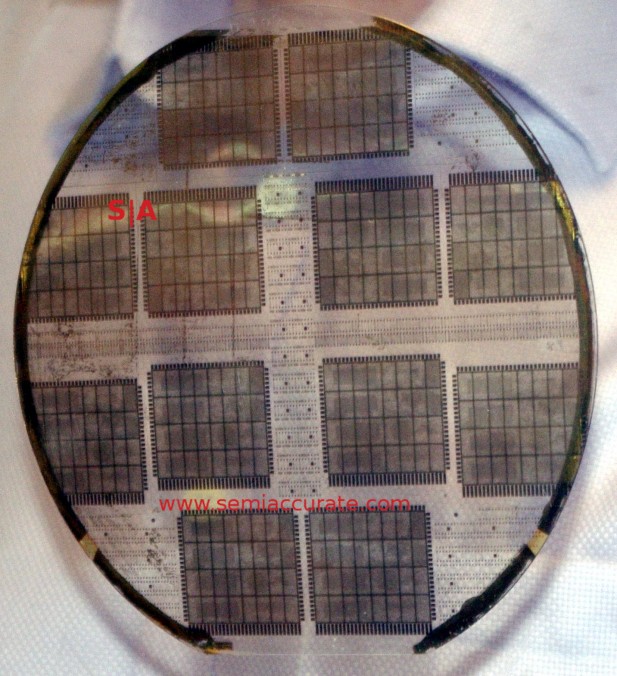 Wafers with an ARM CTO’s shirt for a background

The chip above is more of a microcontroller than a microprocessor or SoC, it is based on a Cortex-M0, not even the mighty Cortex-M0+. It uses an equivalent to a 2 micron process with NMOS transistors, so not exactly bleeding edge in the chip world. That said as ARM shows above, the imprint and deposition transistor world is following a shrinking path that looks like Moore’s Law, or in our view it is somewhat linear.

If the same scaling holds here, you could be printing current low-end SoCs in ~5 years. While we think that is a stretch, once you get past the current 6-inch plastic wafers to larger ones and bring the process down to something resembling a currently modern sub-micron node, it opens up lots of doors. With luck ARM is right and this is one path to the future where transistors are made for a fraction of the cost they are now. If we get there, the world will have changed.S|A