Updated 2X: That is cellular vehicle to X radio for those not up on acronyms

Qualcomm just announced their first C-V2X radio, that is Cellular Vehicle to X for those not up on cars. This new radio is a big step on the road, pun intended, to fully autonomous cars but it is far from the final step.

SemiAccurate has been following the steps toward autonomous driving for a while trying to separate out the facts from the hype, specifically where certain CEOs are talking to channels investors tend to follow. Most of the demos out there show off meager abilities powered by a rack of servers in the back of the vehicle. By rack of servers, we mean a half-rack of full-length beasts that quite literally require a large car or SUV to fit in. Others promise the moon but deliver far less with more.

The one thing lacking in this scenario is a radio. Sure most of the devices shown have a radio or 12, usually LTE, but they are lacking in the real radio necessary for V2X be it cellular or not, to work. That radio is a SIM-free device that works on licensed frequencies meant for V2X comms. Said radio also has to offer direct communications between the vehicle, other vehicles, people, roadside beacons, the occasional wired emu, and preferably able to talk to things on other spectra as well. This capability is both fundamental and utterly lacking in todays V2x ecosystem, and it is what Qualcomm is delivering. 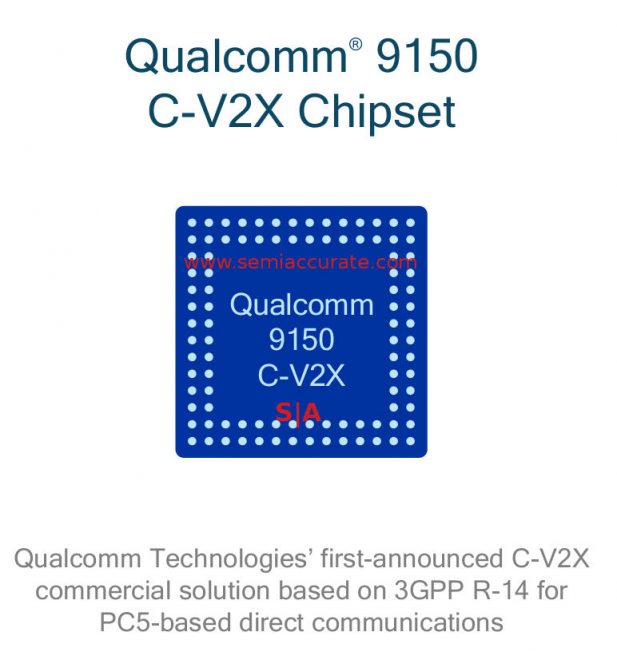 The radio in question

As you can see above the modem is called the Qualcomm 9150 C-V2X and it supports 3GPP Release14. This allows PC5 interface operation on the licensed ITS 5.9GHz band. What it doesn’t do is talk to traditional LTE frequencies like the Uu interface on Band 2 that is meant for V2X comms. Luckily the 9150 can be integrated into Qualcomm’s current telematics units which do have that capability and a whole lot more. Think of the 9150 as a direct peer to peer SIM-free V2X addition to the current Qualcomm telematics and autonomous driving offerings. 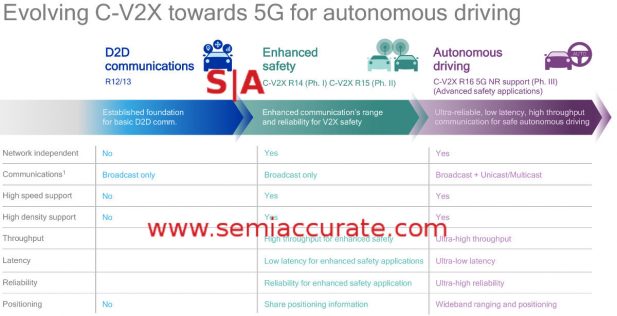 If you think of the path to autonomous cars as a three step process like the one pictured above, when the 9150 comes out we will be half way there. Actually since the middle step is two phases we are a bit less than half way there. Better yet it implements enough of the basic goals to allow coders and automakers to test things in a real environment. The 9150 may not be the height of efficiency but it is better than simulations and anything else you can get in the next 18 months or so. Everything that follows doesn’t appear to add massive new features, just (very important) refinements of what the R14 Phase1 starts with.

So what does it get us? On it’s own not much but the larger telematic units controls a bunch of sensors that do get us really far towards the autonomous car goal. Those sensors can feed their data through an existing cellular network to a server which will then feed it back to other vehicles that need the data. It works. It also has latency far higher than is acceptable for the task at hand. 10s to 100s of ms or more means quite a lot when two cars are heading at each other around a blind corner. Going over LTE will get you the right info at the wrong time.

The R14 C-V2X specs define operation on more efficient interfaces over a longer distance. It uses the full 70MHz allowed on the ITS 5.9GHz band as opposed to the 10MHz used by 802.11p and previous C-V2X devices. FDM, specifically SC-FDM buys you a 3x reduction in power per bit over 801.11p and Turbo coding reduces error rates. The protocol stack is split in two while R14 C-V2X keeps the upper half of the stack from the automotive industry (DSRC/C-ITS service and app layers), the lower half is effectively cellular-like along with existing security and transport layers. This should make hardware and software development much easier, no wheels to re-invent.

Update 1 – Sept 6, 2017 @7:50pm: SC-FDM actually uses 3x the power of of older codings but it also gives more range, much more. We got this wrong above, sorry to confuse any RF people out there.

This is theoretically enough for two cars heading at each other at 250kph to share data with each other in enough time to do something other than run into each other at a net closing speed of 500kph. Various other parts of the R14 C-V2X standard define six lanes, three in each direction, with cars traveling at 250, 140, and 70kmph, all talking to each other without congestion or resource allocation problems. It isn’t an easy job to define this kind of stuff, especially before there are radios in existence that can test the underlying assumptions.

But you have to do it, and that is what the 9150 does. Why? Because existing cell networks can support the data stream between a few cars, albeit with unacceptable latencies, but not hundreds. Thousands? Right out. More? Nope, things like this don’t get better with more congestion. That is why the direct connections on ITS 5.8GHz needs to exist, you need a self-organizing mesh of devices and vehicles to send data to each other, there is no other way. Putting a middleman in the, err, middle, would be too slow even if the cells didn’t collapse under the flows, and they would.

Back to the question of what it gets us, we get some pretty nifty services. Things like cars sending each other positions in non-line of sight situations, think blind corners or through buildings in cities. Short distance road hazard warnings like an animal crossing the road may be sensed by an autonomous car but when it swerves the vehicle immediately behind may not have time to ‘see’ the hazard and thus avoid it. If the front car can signal the hazard it discovered to the cars behind it, things work much better.

Similarly there is a feature being developed called do not pass. Imagine you are behind a truck on a two lane road and can’t see ahead but the truck can see ahead quite nicely. That truck can signal when it is safe to pass and when it is not safe. Better yet the truck or car in front can broadcast it’s front facing camera footage to the cars behind for whatever they choose to use it for.

Another big class of features fall under the banner of intent. If you know the intentions of a vehicle it is much easier to work with or around it as necessary. In the truck passing scenario above, if the vehicle behind signals it’s intent to pass, the truck in front could give it the all clear when appropriate. Same for lane changes, 4-way stop intersections, and adaptive cruise controls for packs of cars. Going out a bit farther, will we need traffic lights? A small speed modification will mean cars can travel through intersections at nearly fully speed and just miss each other, but that is a bit farther off. Intent is the key, “I will be at position X at time Y” is really powerful if you have a mesh of devices all talking the same language and acting on it with the same set of rules.

One thing the 9150 isn’t good at is long range hazards more than a few hundred meters away. Think a bridge out, icy road conditions, or similar things that are known about by other vehicles that encounter them but are too far away to tell you about it on the 5.9GHz channel. That is what the Uu interface and LTE Band2 is for, it can signal low bandwidth, long lead information quite well, especially if it can broadcast over existing LTE cells. Between the two channels things could work very smoothly and this is one big reason the 9150 integrates into existing telematics units.

The Qualcomm 9150 C-V2X Chipset, to use it’s full name, isn’t quite here yet, it is set to sample in commercial quantities in 2H/2018 or roughly a year from now. That will bring us to R14 Phase1 with R15 set for completion in 2018 and R16 a year after. Since R14 was finalized in 2016, add two years to the R15 and R16 before you see silicon. It wouldn’t surprise us to see prototype devices based on pre-release silicon at MWC next year but don’t expect field trials for another year or so after that.

Update 2 – Sept 6, 2017 @7:50pm: Qualcomm says, “Field trials utilizing a pre-commercial form of the 9150 are currently taking place in Germany (with Audi) and France (with PSA).” I guess they are way ahead of where SemiAccurate thought.

So at a basic level, Qualcomm introduced a radio that works on the ITS 5.9GHz frequency, not a particularly newsworthy event there. The rest of the 9150 C-V2X Chipset however is newsworthy. The standards it implements and what interfaces it communicates over effectively define the base layers of V2X mesh-like communications. Now that the comms can happen, the car makers and infrastructure vendors can start to define what is said, how, and when. And actually test it. In live cars. In the real world. When the 9150 gets into the hands of those that want it about a year from now, the real work on autonomous cars will start to snowball.S|A