Analysis: It’s all about the money in the end

Last Sunday AMD released their Ryzen 3000 line of CPUs which put the company in a very interesting competitive position. SemiAccurate thinks these chips have changed the competitive landscape and will change the financial one as well.

Lets start out with what AMD released and in one case will release next September, the Ryzen 3000 line of CPUs. These CPUs, MCMs technically, are a marvel that takes a cue from the AMD Epyc line of server products while fixing a bunch of weaknesses that architecture had. That old Epyc CPU was a NUMA device which meant some very uneven memory latencies. With the new architecture the Ryzen 3000 line erases that by making all CCX (core cluster, two per CCD) to CCX transfers go through the cIOD (I/O die). This bodes really well for the upcoming Rome CPU but that is a matter for another day. 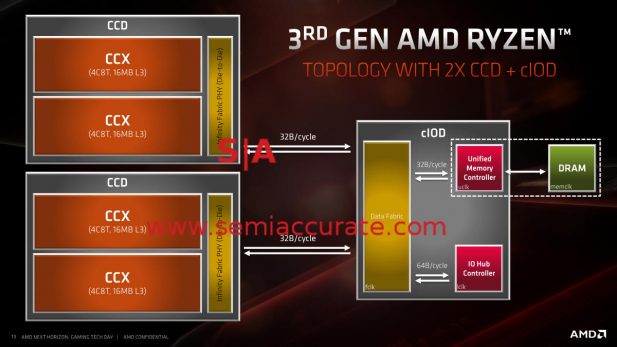 NUMA wasn’t a problem for the previous 1000 and 2000 generation of AMD Ryzen CPUs because all of those devices only used a single CPU die (CCD) and it had memory controllers on board. As you can see above the new Ryzen 3000 series has either one or two 7nm CCD CPU dies and the memory controllers are on a separate 12nm cIOD. Everything else is improved, IPC and clocks are on par with Intel’s latest and best, power use is arguably better, and features are significantly better than the competition. Lets take a look at what is out and what is coming before we tackle these issues though. 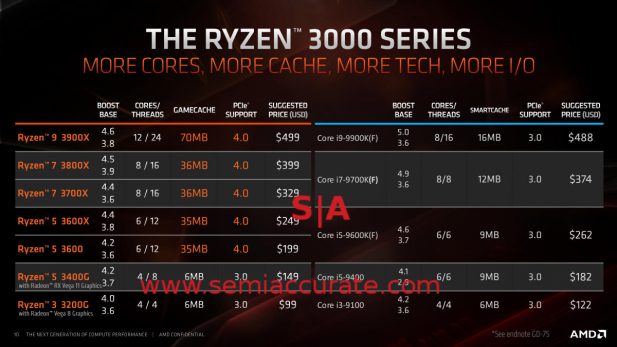 The lineup from both sides

In a general sense the new Zen 2 cores in the Ryzen 3000 line of CPUs are effectively equal, give or take a little depending on the benchmark, to the current best Intel has to offer for performance and betters them a bit on power draw. In short while Intel wins the odd bit here and there, AMD is within a few percentage points on almost every benchmark that matters other than energy draw. On that front AMD beats Intel by significant margins, even with the four extra cores the 3900X has over the Intel 9900K it is closely matched too.

Then there are features, or more to the point lack thereof with Intel’s current lineup. Intel has been playing the anti-user feature removal game for too long and now it is biting them. Their entire market segmentation strategy is based around artificially, and in rare cases actually limiting user features for fun and profit. They fuse off instruction sets, threads, and much more not for real technical reasons, just for market segmentation. Want a chip that exposes hardware encryption instructions (AES-NI), a basic security feature? All modern Intel CPUs have it but for a long time Intel turned it off on lower priced CPUs so enterprise customers would have to buy up the stack. AMD doesn’t do things like this.

This fusing for dollars and enmity strategy worked so well that Intel has started to gut features in hardware. Some of this is done for actual technical reasons, die size, power, and other things, but really it is a not so clever ploy to get customers to buy a higher priced CPU to get the basics of what they need. Intel Xeons have a paltry 48 PCIe lanes, if you want to make a storage or AI/GPU compute server you need 2 Xeons for the necessary cards. AMD blew this segmentation out of the water with Epyc which has 128 lanes/socket and took quite a bit of marketshare in the process.

That brings us back to the Ryzen 3000 line and once again Intel’s anti-consumer feature choices bite and bite hard. Ryzen 3000 has 24 PCIe4 lanes off the CPU, Intel has 20 lanes of PCIe3. Both need four of those lanes for the chipset so there are 20 and 16 lanes available for AMD and Intel respectively but don’t forget each of AMD’s lanes have twice the bandwidth of Intel’s.

Both CPUs are positioned for gaming devices and high performance desktops so you need a GPU and fast storage if you don’t want to hobble your system. This means you need a 16x slot for the GPU and a 2x or preferably 4x slot for your NVMe device so 18-20 PCIe lanes if our math is correct. Intel offers 16 free slots max, see the problem? Do you want fast graphics _OR_ fast storage, you can’t have both unless you pick AMD.

Sure you can put some of that on the slots exposed by the chipset but that bandwidth is shared with other devices which may or may not be an issue for the configuration you want. What will be an issue is the added latency from the hop to the chipset and then to the device. Did we mention AMD’s PCIe4 has double the bandwidth and lower latency so this will be less of an issue on Ryzen 3000 systems? In short there is no comparison, you just can’t make a high end Intel system without serious compromises because of their segmentation strategy. AMD saw this gap and exploited it unmercifully on the server and now it is the desktop’s turn. Customers end up with better system options as a result and there is nothing Intel can do on this front for at least 18 months. 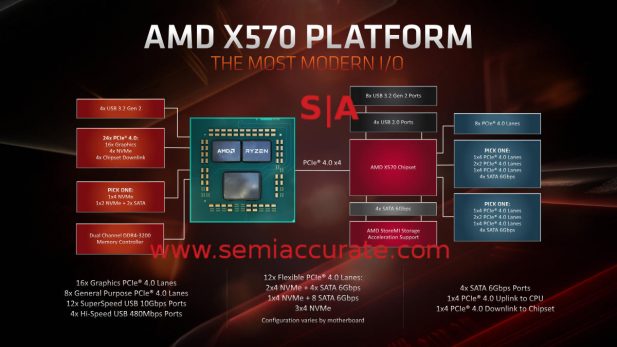 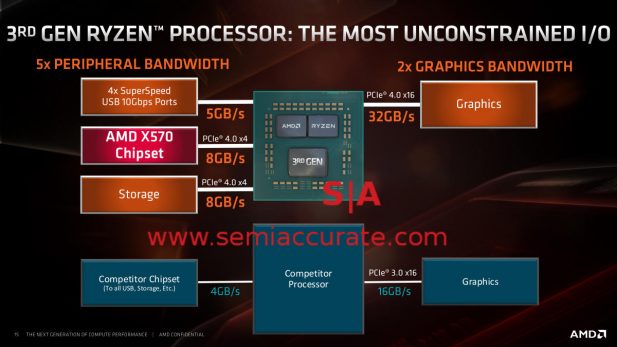 Where things start to get interesting is pricing. You might have noticed in the slide above that AMD is pricing their Ryzen 3000 line right on top of the competitive Intel parts, not above, not below with the exception of the upcoming $749 3950X for which there is no analogous Intel part. This shows you that AMD’s benchmark numbers are both real and the company is more than confident in them to price things like Intel does. This is a huge change that will have massive repercussions on the industry. It isn’t just marketing and cherry-picked scenarios this time.

If you step back and look at the history of the Intel/AMD competitive relationship, other than the Athlon/Opteron/64 days, AMD has always been a step or two behind Intel on performance. Intel has used this performance gap to up the margins on segments of the market where AMD could not compete. Traditionally this has been in high performance single threaded applications, low power laptop, and server. AMD only had offerings at the low end of these markets and until the Zen based Epyc was released, had more or less nothing on the server front. Intel’s prices and margins went up where AMD couldn’t go and went way down in the markets AMD could compete in. This sucked the profits out of AMD and left them struggling to compete, Intel’s strategy worked.

Now Intel has a problem. AMD still has some products on the low end, the 3200G and 3400G are prime examples of this, but on the high end desktop they are equivalent to Intel’s best and have a few niches where Intel has no answer. Intel can still play pricing games all day long but the parts they drop margins on have nothing above them to subsidize with. Any cuts will hit the bottom line hard.

The obvious next step is to do what Intel has done in the past when AMD climbed up the stack, subsidize from other markets, mainly server. Given the woeful state of Intel’s server competitiveness for the next two years or so, this is unlikely to happen. That leaves laptops, a place where AMD has no answer to Intel’s offerings until the Zen2/Ryzen 3000 mobile parts launch in a few quarters. Until they are released, Intel can play the old game of jacking up prices in one segment to crush AMD in another.

Once again we don’t think Intel will do this for two reasons, OEMs and money. When Intel plays these pricing games, OEMs don’t seem particularly fond on the practice for some reason. If a laptop’s price suddenly goes up by $100, this has an effect on sales and OEM goodwill. On the income side while it would work short term, it sets Intel up for a harder fall when the mobile Ryzen 3000 line hits. Nothing like an angry customer base faced with a viable alternative against an overpriced part.

Although Intel would make a bit higher margins here it would set them up for a much harder fall in the near future. They know they need all the goodwill they can get at the moment so we think laptop pricing games on a level that would make a difference are unlikely to materialize. In short Intel has few if any options to subsidize pricing to keep AMD out of the markets the Ryzen 3000 line just entered.

So where does that leave us? It shows pretty clearly that the Ryzen 3000 line can trade blows with the best Intel has to offer on any workload out there, even the dreaded single threaded tests that Intel was nigh-invulnerable at. Some tests AMD wins, some tests Intel wins, but overall they are roughly equivalent on a core to core, clock to clock basis. Intel can clock a little higher, AMD has a much richer feature set and can offer more cores. In the end the one real data point is price and on that front AMD is equivalent to Intel on merit.S|A